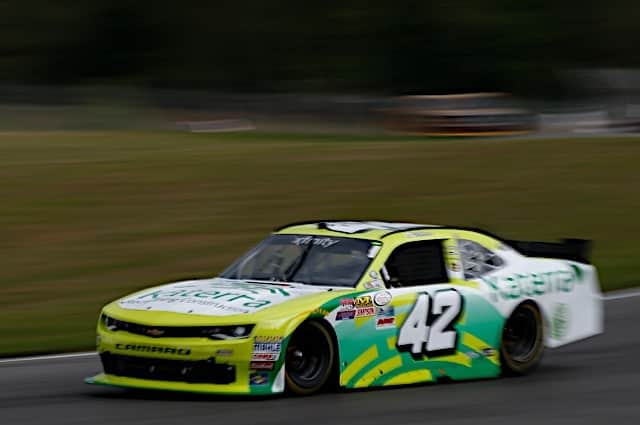 In the midst of a struggling 2016 campaign, all it took was a little rain, and some tremendous driving in it, to bring Chip Ganassi Racing’s Justin Marks his first-career NASCAR XFINITY Series victory at Mid-Ohio Sports Car Course.

Making his 25th-career XFINITY Series start, Marks marched his way to the front, led a race-high 43 laps and held off the field on a late restart to claim the Mid-Ohio Challenge on a wet, wild day in the Midwest. The win is the first for the Californian in a NASCAR national series, and the second for the No. 42 Chevrolet after Kyle Larson’s earlier win at Pocono Raceway.

“It means the world. I’m not a big time race car driver,” Marks said. “It just means a lot to get an opportunity with Chip Ganassi Racing and get a win.”

Pole sitter Sam Hornish, Jr., drove past teammate Ty Dillon for second on the final restart of the 75-lap event to give himself a shot at the victory, but was forced to settle for second as Marks drove off.

Running amid scattered showers, Saturday’s standalone race for NASCAR’s second series became one of attrition and changing strategies. Multiple drivers made their way off-course while trying to maneuver on the slick track, leading to eight cautions and a slew of lost positions.

Through the mayhem came a few surprising runs. Marks marched to the lead on what proved to be a dominant day, while both Lally and NASCAR Next driver Alon Day spent much of the day inside of the top 10 for underfunded teams before finishing seventh and 13th, respectively.

The XFINITY Series field will return to action for the Food City 300 at Bristol Motor Speedway on Friday, Aug. 19.

Congrats to Justin & the CGR crew! The best in class in a folly of errors! These wet races are very odd birds indeed, naturally. But this one, race teams knew a week out the weather would be issue oriented, so we ended up with a lot more “road course & wet specialists” than usual. Which only helped bring an unprecedented level of “WET checkers or wreckers” from the likes of Sam H, Kenny H, Andy L, Nelson P, etc… who ended up off as much as any of the inexperienced guys. Prolly the most off course excursions I have even seen at a Nascar event.