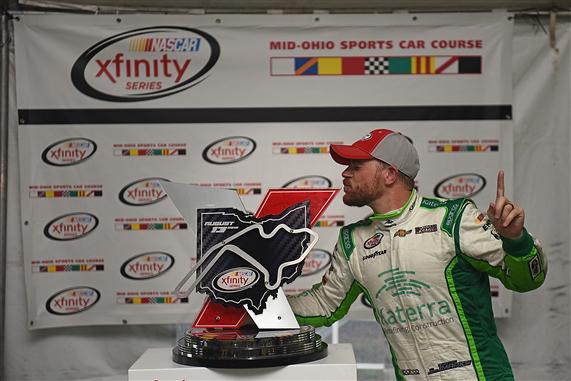 Well, no one said it would be easy to get your first NASCAR XFINITY Series win.

But chances are Justin Marks didn’t think he’d have to slip and slide through the rain to do it. Saturday (Aug. 13) at Mid-Ohio Sports Car Course, amid a wet-and-wild track surface and after a final restart with two laps to go (after amassing a lead that stretched well over 20 seconds), Marks proved there was no one better in the rain than he, cruising to his first series win.

Marks, driving part-time this year for Chip Ganassi Racing with Felix Sabates’ No. 42 team (see: the races Kyle Larson isn’t running), was visibly moved in his post-race Victory Lane interview, saying that winning “means the world.” He also expressed his sympathies to the family of Bryan Clauson, the late driver who was honored by the Nos. 42 and 48 teams with a special decal this weekend; Clauson was a former developmental driver for Ganassi in the late 2000s.

His win brought about a rarity in the series: a non-Cup Series part-timer whose victory will have no bearing on the series Chase other than the fact that it’s one less race for a series regular to win to ensure himself a berth in the post-season. It’s the second time it’s happened this season, following Sam Hornish, Jr.’s win at Iowa Speedway.

Speaking of Hornish, he finished second in his third XFINITY race of 2016, giving him an average finish of third this season.

It’s great to see a first-time winner in any series, and seeing Justin Marks finally come out on top will endure as one of the season’s best stories across all three NASCAR national series.

We’re looking at a guy who hasn’t run a full NASCAR season ever, coming the closest when he competed in 18 of 25 races in the Camping World Truck Series in 2008 for Germain Racing. Zero top 5s in NASCAR national series competition. A solid ARCA Racing Series career, with a win in 2010, but nothing flashy.

That’s what a good ride will do for you, though. After running a pair of road course races for the No. 42 team in 2015, Marks expanded his schedule considerably for 2016, driving every race Kyle Larson hasn’t, including the standalone events. He’s been passable at best in his prior 11 starts, with a best finish of 11th, but one always had to expect Marks to be a threat on the road courses, whether rain was a factor or not.

Will it expand to anything else in NASCAR for the 35-year-old? Hard to say, and that aforementioned age will certainly be a factor; yes, it’s a first win, but we’re not talking some hot young prospect here — that was more like a decade or so ago.

But in a race marred by general peculiarity and some less-than-stellar displays from some of the supposed best drivers in the world, well, it’s tough to not appreciate this bright spot.

Oh, come on, let’s just get to the ugly. Because oh my god.

In the past few years in NASCAR, there might be no other race that deserves the descriptor ‘ugly’ more than this one.

And you know what? That’s not all bad.

Yes, the race couldn’t go a lap in the rain without at least one driver — generally more — careening off the track. Yes, the leaders often couldn’t even hold their advantage, going off-roading as much as the less-experienced racers toward the back. Yes, occasionally when the cars came around a corner they looked like they were running Eldora. Yes, it wasn’t necessarily an amazing showing of NASCAR racing prowess; if your sports car racing friend decided, on a whim to watch Mid-Ohio, because hey, Mid-Ohio, why not, he or she probably wouldn’t have been too terribly impressed.

But really, this race’s ugliness is what made it so endearing to watch on TV. Every lap that ticked off provided a new challenge, a reset button. Darrell Wallace, Jr. could be winning the race one moment and be 10th the next, running off the track multiple times. A driver like Alon Day, in his series debut driving for Carl Long’s underfunded organization, could be in the top 5 for a little while. Ryan Blaney could go off the track multiple times toward the end of the race and still somehow recover for third place.

Yeah, it was often a cringeworthy display of racing. But boy, was it fun to watch.

How about Andy Lally? OK, right, road course ace at Mid-Ohio racing for the lead, not that exciting, right? Well, two things. Firstly, Lally did so in the No. 90, a car owned by journeyman driver and owner Mario Gosselin — far from one of the worst teams in the series, but generally the type of organization that’s happy with a top 20, let alone a top 10.

To make matters more interesting, Lally’s windshield wiper was busted toward the end of the event, meaning he often couldn’t see as clearly as his fellow drivers — and he still finished seventh, equaling his best finish ever in the series. Might have given the edge to Alon Day’s impressive 13th-place debut otherwise, but look, have you tried driving in the rain without your wipers working? It’s not fun at 35 mph, let alone in a NASCAR race.

Just one?! Just one! Ryan Blaney came down from the Cup Series for just his fourth start of the season, piloting Team Penske’s No. 22 car in a rare week without Joey Logano or Brad Keselowski behind the wheel. He had his share of rain-related issues, going off the track very late in the going, but still rebounded for a third-place result.

Should rain racing become a thing across all three series when it comes to the road courses? Eh, not so sure. But you can’t say we won’t remember Saturday’s race for the rest of the season and probably beyond that — which, given much of the unspectacular racing in the series this year, that’s not all bad.

A first-time winner aside, Mid-Ohio gave viewers the opportunity to see new faces (Marks, Day, Ryan Preece and more) up front and to watch even some of the best drivers in XFINITY this season squirm and claw their way to good finishes.

Because on Saturday, you had to work for it. No riding around in the top 20 by default, maybe making a move for the lead but maybe not. No simply surviving and further punching one’s ticket into the Chase. If you weren’t the one sliding off the track, oftentimes the drivers in front and behind you were, and there was no guarantee you wouldn’t get caught up in their mess.

Unpredictability is something many have hoped to return to NASCAR, especially in a series where Cup double-dippers often take the checkered flag. And while Mid-Ohio may not give that sort of finish to us every time, it’s tough to be too angry when it does, no matter the circumstances.

Bristol Motor Speedway. Friday night. Tempers flaring? Maybe, maybe not, but either way, it’s bound to be a solid show, even with a likely influx of Cup drivers in the field given that it’s a companion weekend. It’s all happening Aug. 19 on the USA Network at 7:30 p.m. ET.