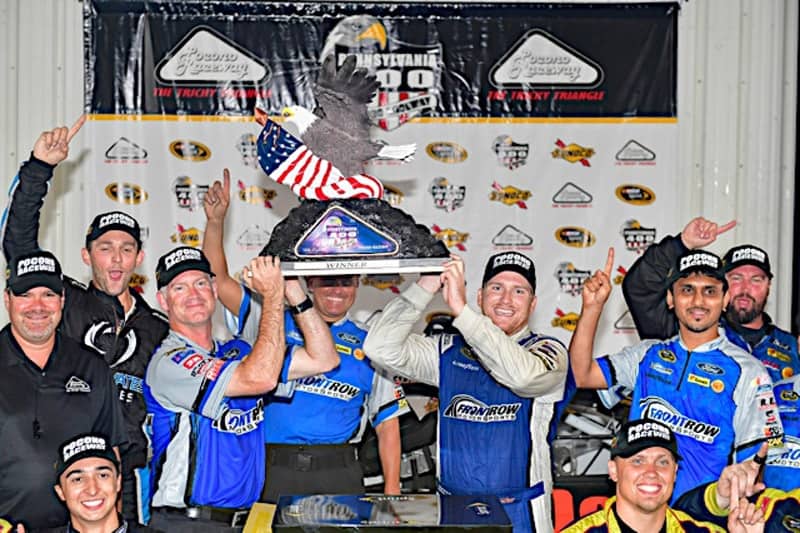 The teams covered in this article each week aren’t likely race winners (though many of them certainly can—and on occasion have—win if circumstances dictate). However, NASCAR is about more than winning.  Consider the amount of preparation that one of the sport’s elite teams has to put into bringing a racecar to the track, race ready, each week—it’s a seven-day a week job for those teams, and they have dozens of people to do the work.  It takes the same amount of work for every team to prepare for races and to get the best finish they can…and here are teams showing up every week with a tenth of the budget and maybe a quarter of the manpower, and performing at the top of their games each and every week.  That takes dedication and it takes skill.

It’s human nature to pull for an underdog, for a David to conquer a goliath, and when they do, even for a brief moment, it’s good for the sport.  The drivers know this—when Matt DiBenedetto finished sixth at Bristol driving for BK Racing, winner Carl Edwards seemed almost more impressed by that feat than his own, and it was, in reality, probably at least equal.  Fans should understand this as well. A top 15 for some of these teams is a big day, and if they beat a few of the big names along the way, they earned it.  There’s a race for best in class every week among this group and bragging rights are a big deal to the teams.

And all of this is good for NASCAR, perhaps vital to NASCAR.  If the small teams went away, it’s unlikely that they could be replaced by enough quality larger teams to fill fields, and do fans really want more teams like Joe Gibbs Racing or Hendrick Motorsports, where top finishes are taken for granted and drivers pout when they don’t get one?  Maybe that would not be such a good thing for a sport amidst an identity crisis.

Since the Cup Series was off this past weekend, lets take a look at the small-team drivers who have visited Victory Lane in the Sprint Cup Series—it’s actually a fairly extensive list of talent.  Some of the drivers on this list won driving for bigger teams, making it clear that it’s resources, not equipment, standing in the way now.  Others found a way to make it happen with one of the little teams.  Either way, they’ve done something many others have tried and failed to do.

Chris Buescher
Buescher is the most recent addition to the list, winning two weeks ago at Pocono when his Front Row Motorsports team played the best strategy on the day, sending the No. 38 to Victory Lane when the smoke cleared (or didn’t clear).  Buescher has shown plenty of chops in the driver’s seat, winning last year’s XFINITY Series title and whole he admits that the Cup Series has had a steep learning curve, the youngster has shown maturity and poise in the driver’s seat this year

David Ragan
Ragan also won under the Front Row banner, taking the checkers at Talladega in the spring of 2013 when he and teammate David Gilliland swept past the field in the final turns.  His first of two Cup victories came in 2011 at Daytona, running for Roush Fenway Racing.  Ragan is obviously a restrictor plate specialist; an underrated skill that some of the sports best haven’t mastered.

Regan Smith
Furniture Row Racing is now among the Cup elite, but that’s relatively new.  The team was still experiencing growing pains when Smith made a pit gamble work all the way to Victory Lane in the 2011 Southern 500 at Darlington, one of NASCAR’s most notoriously difficult tracks.

AJ Allmendinger
Allmendinger is one of those drivers who could easily have a few more wins under his belt with a little more mechanical luck on his side.  His Cup win came at Watkins Glen in 2014, which put JTG Daugherty Racing in the Chase for the first time in team history.  Allmendinger is always a legit threat every time the series visits a road course, so it’s unlikely the win will be his last.

Clint Bowyer
Bowyer has enjoyed most of his career running for some top teams, and has eight career wins and five top-10 points finishes to show for it.  Running for HScott Motorsports (which does not receive technical help from a larger team) has been frustrating for the driver, but he’s actually done well with the team, and he’s on to Stewart-Haas Racing next year, where the wins will likely come.

Bobby Labonte
A sometime driver for FAS Lane Racing (Labonte runs the four restrictor-plate events), Labonte, along with older brother Terry, have had some solid runs for the one-car operation.  Bobby Labonte is, of course, the 2000 series champion and was the first driver to win titles in both the XFINITY and Cup Series (and the only one to do so as a regular in those respective series at the time of his titles).  He’s going to get Hall of Fame consideration when he retires.

Casey Mears
Mears’ win came in NASCAR’s longest race, the 2007 Coca-Cola 600, with Hendrick Motorsports in what’s now the No. 88 car (then No. 25).  He’d been very close on other occasions only to have luck desert him, and the win came at a time when Mears’ HMS team was in the midst of some instability, so it was a bit of redemption for both team and driver.  Mears, like Ragan, is also one of the best plate racers out there, so his best shot at taking Germain Racing to Victory Lane lies at Daytona or Talladega.