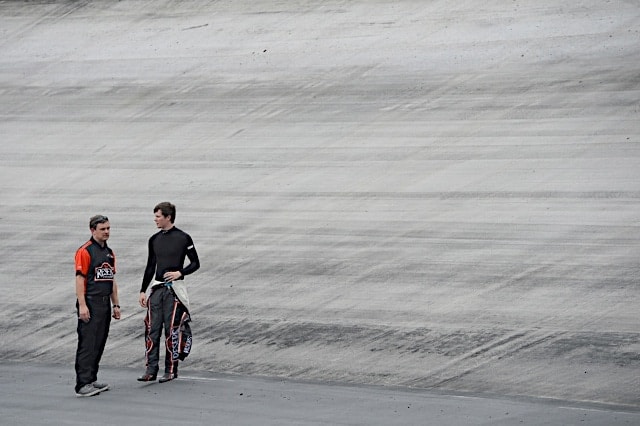 Will the Bottom Lane Be the Fast Lane at Bristol?

I don’t think there had ever been more eyes fixed on a NASCAR Camping World Truck Series race than Wednesday night at Bristol Motor Speedway.

With the first of three races this week at the World’s Fastest Half-Mile, the newly rubbered inside lane – which was the key groove for decades before the track’s repave in 2007- was on display for the 200-lap race.

It was then when trucks fought for the bottom lane, spun and cut tires from the race lead and, without much surprise, did not employ the Caution Clock through nine cautions, the most at Bristol since 2010. Additionally, William Byron showed potential away from the inside groove by racing to the lead from the middle-to-top lane, demonstrating signs of multi-groove perfection.

Following the fairly popular outing from Marcus and Bruton Smith’s effort, the question jumps to the XFINITY and Sprint Cup series and if the flashback-style racing can bleed into Friday and Saturday nights.

It’s smart to stay cautiously optimistic following a Truck event at any racetrack. Firstly, the field of Truck racers, albeit at a short track, still obviously lack the experience of a Cup or XFINITY field. When put under new, unpredictable circumstances like Wednesday, the drivers and teams may approach things different than, say, a Joe Gibbs Racing or Stewart-Haas Racing in Cup.

But there is also a difference between how a Truck and Cup car drives. With more power under the hood and cars on the track, the highest level of stock car could have more trouble moving to the tight bottom lane. Keeping it powered up on the high lane could still be the best way for these racecars come Saturday.

However, the potential is there no matter how you look at it. Drivers – insert Tony Stewart here – love options, and Bristol will have more of them than recent years.

What is at Stake for Regan Smith and Gray Gaulding?

Ah, short tracks. In either the XFINITY or Truck series, they seem to consistently bring out some new faces to the grid.

This time around for Friday’s Food City 300 at Bristol, it’s Regan Smith in the No. 88 JR Motorsports Chevrolet and Gray Gaulding in the No. 60 Roush Fenway Racing Ford.

Though they’re even with zero starts in 2016 in the series, everything behind the goose egg couldn’t be more different.

For Smith, the six-time series winner makes his first start of 2016. But he hasn’t been absent from racing; Smith has raced full-time for Tommy Baldwin Racing in the Cup Series. For this weekend, he’s back with JRM, the team he raced for from 2012 to 2015 in XFINITY.

As for Gaulding, the 18-year-old has never touched an XFINITY car before Thursday practice at Bristol. In fact, he’s been out of NASCAR competition all season following a four-race stint in the Truck Series last year.

They are two different stories on site this weekend. For Smith, it’ll be a well-timed confidence boost for the New York native, who sits 32nd in Cup points with two top 10s. Returning to his JRM home will be a happy sight for Smith, who’ll soak up his time up front. Gaulding, on the other hand, has a few things to prove in his XFINITY debut. After a semi-sweet run in the Truck Series, Gaulding will have Friday night and one last race at Richmond International Raceway next month to show car owner Jack Roush and the rest of the sport what he can do.

That is precisely one negative that comes from the massive crowd of strong talents rushing to NASCAR nowadays. With less and less building time for kids like Gaulding, it highlights races like Bristol in terms of importance. Gaulding has to make the absolute most of this chance, and it’ll have to all start with track time, lessons learned and positions gained.

‘Concrete Carl’ continues to be an acceptable term in NASCAR. Though he’s not everybody’s ‘Cousin’ – despite his other popular nickname – Carl Edwards has recently been everybody’s master at the concrete tracks in the Cup Series.

Actually, very recently, as he owned the field last time out at Bristol, leading 276 of 500 laps en route to winning from the pole this past March, his second win in the last four Bristol races. The 37-year-old has also ranked up 633 laps led since 2013.

Edwards has to stand as one of the guys to watch come Saturday. However, if this rubbered-up low lane plays as high a factor as the Truck event on Wednesday, it could throw a wrench in Edwards’ plans of another Bristol repeat.

Starting his Cup career in 2004, Edwards didn’t get too many years of the old Bristol before the 2007 repave, which sparked his success at the half-mile, winning two of the first three events. If the racing grooves are a significant change from the spring, he could have to rely on his low-downforce package to bring him another victory.

Is Bristol Kyle Larson’s Best Chance to Gain Ground into the Chase?

Only four races to go until the Chase for the Sprint Cup championship kicks off and there is still plenty on the line for some of the sport’s biggest players.

Right off the bat, if Chris Buescher has one enemy on planet earth, it’s Kyle Larson. Sitting in the 16th and final Chase spot, he is at the mercy of Buescher to decide the difficulty level of making his first Chase. With Buescher sitting three points behind 30th spot in points, the Pocono winner is likely to push Larson back to 17th and out of the Chase picture.

The man who’ll separate Larson from the Chase if or when that happens? It just had to be his Chip Ganassi Racing teammate Jamie McMurray, right?

With 31 points between the CGR boys, it’s crucial for Larson to close the gap. Luckily for him, if there is a place – or track type – where he can gain the most traction, it would be Bristol and a concrete surface.

This past spring at Dover showcased Larson at his best, as he battled for the race win with Matt Kenseth until the final corner. Finishing second that day, it continued a run of five straight top-10 finishes at Dover.

With the lack of stellar finishes, similar traits have been found in Bristol, as Larson grabbed three second-place finishes at the half-mile in the XFINITY Series and two top 10s in Cup while leading a career-high number of laps there in 2015, pacing for 90 circuits. In fact, Larson’s two best career Cup races in terms of laps led have come on the concrete tracks of Dover and Bristol.

With pressure building as he approaches his 100th Cup start and his third crack at a Chase berth, Larson needs to put his best on the track starting this weekend in Bristol.