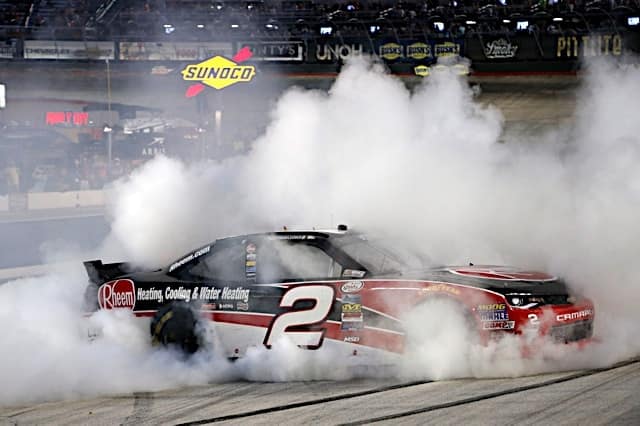 For Austin Dillon, leading the NASCAR XFINITY Series field to the green flag for NASCAR Overtime on Friday must’ve felt surreal. After all, Dillon had been running fourth before the previous caution.

However, when Kyle Busch and Ty Dillon crashed out, and leader Brad Keselowski ran out of fuel, there the elder Dillon brother sat.

In the end, Dillon made the most of the opportunity, holding off a charge from Kyle Larson and Justin Allgaier to claim the Food City 300 at Bristol Motor Speedway.

The win is Dillon’s eighth-career NXS victory, and his second win of 2016 following a similarly surprising victory at Auto Club Speedway.

While Dillon ultimately prevailed at the en of the night, the story of the race was dominated by Larson and the Joe Gibbs Racing trio of Busch, Erik Jones and Daniel Suarez.

Rising to the front as the high line began to prevail early on, Larson proved to be the car to beat on long runs, holding off fierce challenges from both Jones and Busch through the race’s opening 200 laps.

Larson wasn’t passed –on the racing surface or on pit road– until his team elected to pit during a lap-232 caution.

Having pitted on the prior caution on lap 192, Keselowski, Ty Dillon and three others elected to stay out under the round of stops, giving Keselowski the lead.

That move, and a subsequent crash between JGR teammates Jones and Suarez, would set up the race to the finish, with Keselowski trying with all his might to hold off challenges from Busch, Larson and Ty Dillon through traffic.

The challenges culminated in a group of challenges from laps 280-395, where Ty Dillon temporarily surged to the lead with a three-wide move, only to drop back to third after colliding with the outside wall.

Busch then attempted to take advantage of the space and challenge Keselowski, only to end up in the wall when he tried to swerve in front of the 2010 NXS champion on Bristol’s frontstretch.

Ty Dillon would collide with Busch, and the damage from the incident would force both drivers behind the wall for the finish.

Laps later, while running under yellow, Keselowski ran out of fuel, forcing him to pit road as he fell two laps down.

With the top three out, Austin Dillon surged into the lead, and held off Larson and Allgaier to claim the victory.

Allgaier came across the line in second to tally his best non-restrictor plate finish with JR Motorsports. Larson, Elliott Sadler and Brendan Gaughan rounded out the top five.

The caution flag flew eight times on the night, each for an accident on-track. Seven drivers combined to lead the race’s 308 laps, with Larson leading a race-high 200 laps.

The XFINITY Series will return to action on Aug. 27, when the field heads to Road America for the Road America 180 Fired Up by Johnsonville.

Watching parts of the race I kept wondering where are the horses in water polo?

I thought it was a pretty good race with several grooves to run. I’d love to know why the yellow was thrown for Ty Dillon’s spin? He didn’t hit anything, spun down off the track and on to pit road. Was it because someone might pit while he was getting turned around?