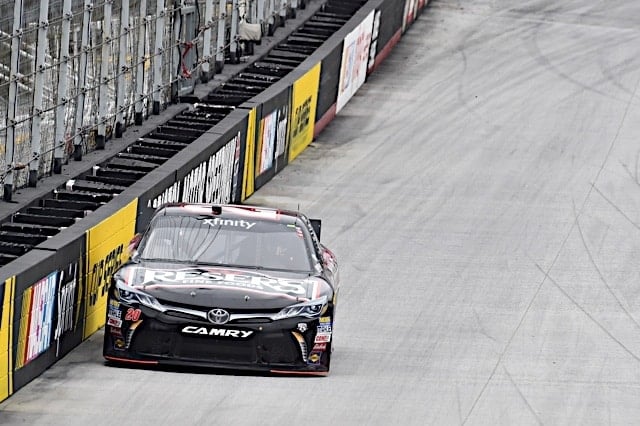 After running inside of the top 5 for much of the night, Joe Gibbs Racing teammates Daniel Suarez and Erik Jones found themselves out of contention after colliding late at Bristol Motor Speedway.

Mired in the back half of the top 10 following pit stops and varying strategies on the half-mile Tennessee oval, Jones and Suarez were battling for position on lap 244 when Jones accidentally hooked the left rear of Suarez’s No. 19 Toyota, sending both drivers spinning across the track.

Suarez continued on with heavy damage after the incident. Jones, however, wouldn’t be so lucky, dropping out of the race due to damage. Suarez would finish 30th, with Jones following in 33rd.

Jones took the blame for the incident following the race.

“I just made a mistake. I basically turned the 19 (Daniel Suarez),” Jones said. “It’s unfortunate, I feel bad for Daniel and I feel bad for this team and my guys. The Reser’s Camry was really good and it deserved a good finish and was probably good enough to win. I just threw it away on that restart and tried to make too much happen too quick. Just trying to get back in line behind them before the others got there and I wasn’t clear. Just mad at myself.”

Suarez was left searching for answers as what looked like another solid day came to an unfortunate end.

“It was a ‘wreckfest’, I don’t know what to say. Really unfortunate,” Suarez said. We had a very hard first half of the race and we were just pretty off with the balance. Finally kind of got it decent and we were a top-five car and then that happened. I don’t really have a lot to say.”

The bad luck would continue for JGR later in the race, when Kyle Busch crashed out after battling for the lead with Brad Keselowski. Busch would finish 24th.

The result marks the first time JGR has failed to place a driver inside of the top 10 during the 2016 XFINITY Series season.