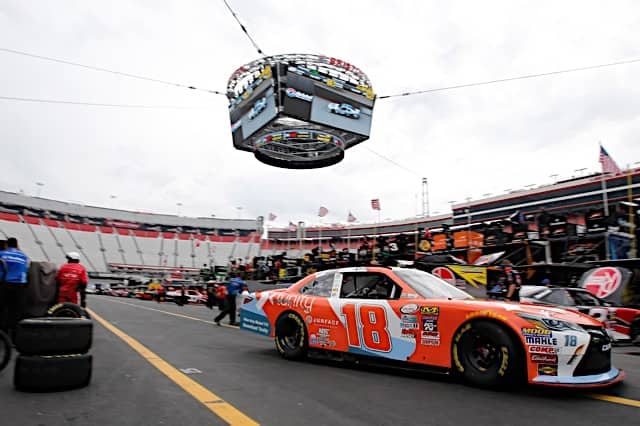 Brad Keselowski and Kyle Busch have a history of hard racing and the occasional crash over the years, so when the two found themselves fighting for the victory late in Friday’s Food City 300 at Bristol Motor Speedway, there was almost a sense of inevitability from the paddock that the drivers would collide.

Those feelings proved to be true on lap 297, when Keselowski caught Busch’s right-rear fender, sending both drivers into the wall and spurring a wreck that would ultimately take out both Busch and Ty Dillon.

Running with an ill-handling car on old tires, Keselowski spend the final 60 laps of Friday’s race trying to hold off Busch, Dillon and Kyle Larson after inheriting the lead on a strategy play. With five laps to go, the strategy was working, too. Save for a pass on the outside from Dillon, a move that he ultimately squandered by getting into the wall laps later, Keselowski had managed to maintain his position in traffic.

However, Busch was in position to challenge. With four laps to go, the defending Sprint Cup Series champion dove under Keselowski and, thinking he was clear, tried to pull ahead of the Michigan native while driving down Bristol’s back straightaway.

Unfortunately for Busch, he wasn’t clear. Keselowski caught the tail of Busch’s car, sending him into the outside wall first on the straightaway, and then again going into turn 3 when a flat tire left the Nevadan without control of his machine.

Running third with nowhere to go, Dillon plowed into the back of Busch’s No. 18 Toyota, ending the day for both drivers. Busch would finish 24th, with Dillon following in 25th.

Busch declined to comment on the incident following the race.

Keselowski managed to stay in the lead following the crash, only to surrender the position to head to pit road when his machine ran out of gas during the caution. Keselowski would finish 12th, two laps off of the pace.

“I knew [Busch] needed to come up because three and four, the bottom groove wasn’t as good,” Keselowski said after the race. “He knew he needed to come up and there just wasn’t enough room. I was already there and it clipped him in the right-rear.

“I don’t really know what happened from there, but it was tough. We were battling really hard and definitely didn’t want to see it end that way.”

“Those feelings proved to be true on lap 297, when Keselowski caught Busch’s right-rear fender, sending both drivers into the wall and spurring a wreck that would ultimately take out both Busch and Ty Dillon.”

Caught Busch’s right rear fender? Oh ya, it’s easy to do, especially when Busch moved up before he was clear.

“Busch declined to comment on the incident following the race.”

Several other sites have Busch calling out Keselowski as a dirty racer. Pot, meet kettle!

I guess in the grand scheme of things, and in Mr. Busch’s mind, given that it was Kyle Busch, and Saint Gibbs Racing, Brad’s spotter was supposed to let Brad know who it was racing him, and Brad was supposed to just move over, back off, and let Ego-boy by. Welcome to the world of the “National Association of Squeaky Clean Auto Racing”. Not!

You have to admit that Squeaky Clean makes more sense than Stock Car these days.

This time it was all Kyle’s fault. He tried to pull a slide job and wasn’t clear. Keselowski could have let him in but, with 5 laps to go and going for the win, he did exactly what he was supposed to do. Hold his ground. I was glad neither of them won (it goes without saying I was hoping a non-Cup driver would win).
So they clashed at Watkins Glen, now last night, I hope they beat the hell out of each other on the track the rest of the season.

Sounds like Kyle thought Brad would back off and let him in like he’s done in the past. Has Kyle blamed his spotter yet for saying “Clear?”

Oh c’mon everyone isn’t Kyle “Pee Wee Herman” Busch supposed to win every race he is in, wouldn’t that get more people to watch these races. ALL THESE RACES ARE GETTING PATHETIC TO WATCH ANY MORE.