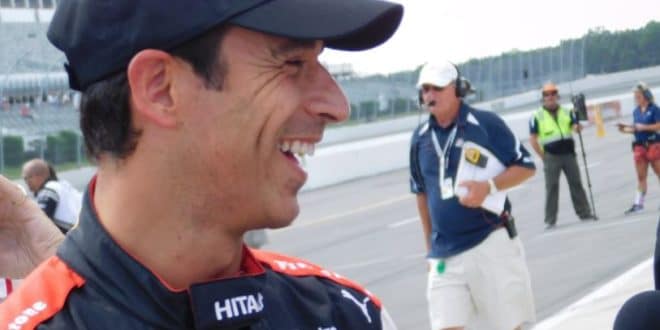 Though he wont be leading the field to start in tomorrow’s ABC Supply 500, Helio Castroneves gets the last laugh before the green flag at Pocono Raceway, as he leads final practice at Pocono Raceway.

At a lap time of 41.129 seconds [218.824 mph] the Team Penske man led the way by 0.147 seconds to lead the 30-minute session. Carlos Munoz and Simon Pagenaud finished second and third quick, respectively.

In a short session dominated by drafting and pack runs, it gave many drivers a taste of what their cars can do when they’re put up against 500 miles of racing on Sunday.

For Chip Ganassi Racing rookie, Max Chilton, he made his first race runs on the 2.5-mile track as he hopes to continue to learn the style of oval racing.

“I haven’t done any race running here,” Chilton said. “In the test two weeks ago, we were just focusing on qualifying. We actually left there very confident. Coming here today, we’ve lost that. It’s not very much running but it’s enough to give us a sense of what it’s going to be like tomorrow.”

With multiple accidents taking place in the morning session, it was Juan Pablo Montoya, Charlie Kimball and Ryan Hunter-Reay who used the final session to learn their back-up machines before race time.

In fact, for Hunter-Reay, the reigning Pocono winner was unable to make a lap in qualifying, making the 30-minute session ever-more important for the No. 28 team. They finished 13th quick.

Growing up in Easton, Pa., Zach Catanzareti has grown his auto racing interest from fandom to professional. Joining Frontstretch in 2015, Zach enjoys nothing more than being at the track, having covered his first half-season of 18 races in the Monster Energy NASCAR Cup Series in 2017. With experience behind the wheel, behind the camera and in the media center, he thrives on being an all-around reporter.
Previous Annett Out at Bristol for Illness; Allgaier to Sub
Next 2016 Frontstretch Cup: Staff Predictions for the Bass Pro Shops NRA Night Race at Bristol 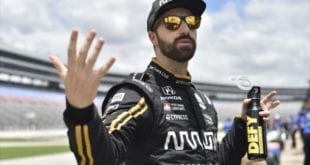 James Hinchcliffe will close out the 2020 NTT INDYCAR Series with Andretti Autosport, the team …