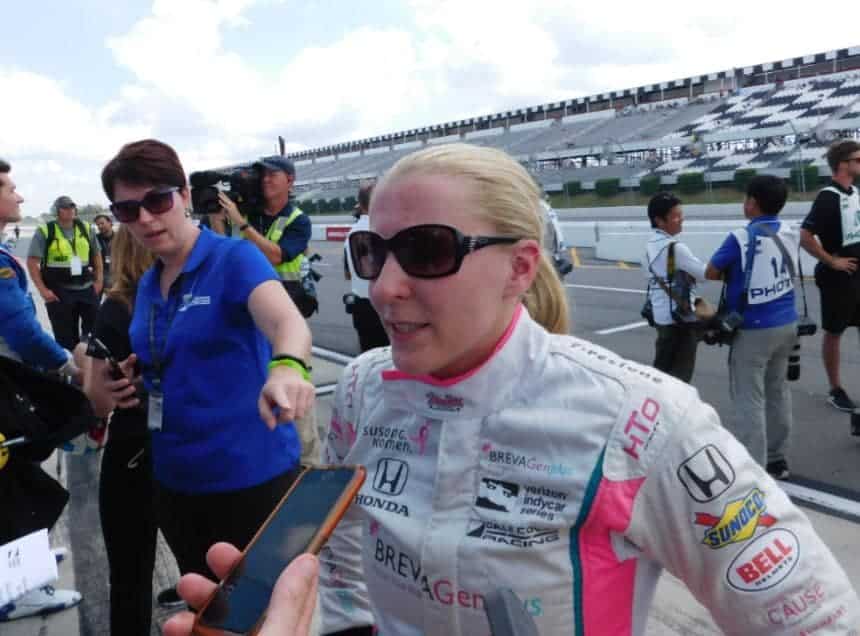 On relatively short notice, Pippa Mann finds herself in the No. 19 Dale Coyne Racing Honda for Sunday’s ABC Supply 500 at Pocono Raceway.

However, it will prove to be a last-minute change for a lasting cause, as Mann, and teammate Conor Daly, pay tribute to fallen friend, Bryan Clauson, who passed away on August 7 following a sprint car crash.

After a qualifying run of 211.267 mph, Mann, with tears in her eyes, believes this weekend has been the hardest of her racing career.

“It’s probably the hardest race weekend I’ve ever done,” she emotionally said. “I’m really glad to be here… I’m very grateful I get to be one of the drivers who helps Bryan make his 200th start, especially in a race that’s remembering Justin [Wilson], who was one of my teammates as well.”

Indeed, with dozens of Great Britain flags waving down pit road, every driver, team member and fan have been

reminded of the tragedy that struck Pocono Raceway one year ago, as Justin Wilson was struck and killed by flying debris in last year’s ABC Supply 500.

With the added remorse for this weekend’s race, which will be only the second for Mann in 2016, the 33-year-old is honored to have be welcomed back to continue Clauson’s legacy, as well as support Dale Coyne Racing, who paired Mann with Wilson from 2013 to ’14.

“It’s hard… I’m grateful to be here,” she said. “Even though I know USAC has already gotten Bryan way over 200 – [Clauson] was my friend, it’s personal to me to help him reach that number.”

Lining up 21st for Sunday, Mann will have plenty of oval racing experience to guide her through the long, treacherous 500-mile event, as she makes her third Pocono start since the track’s return to IndyCar in 2013.

“It’s very challenging to kind of roll up and jump in a car at a place like this,” she said. “We need to keep improving the cars that are underneath us, 500 miles is a really long way. If we can just make the car a little bit happier, I can get to driving it a little bit better as well.”

With Daly starting alongside in 20th, Mann is sure to underlie the unpredictability of the ‘Tricky Triangle’ after she tied her career-best finish [13th] here in 2015.

“A lot can happen over 500 miles,” she concluded. “I always look forward to the long races, I enjoy them. So hopefully we’ll run 500 miles tomorrow and hopefully Conor’s ‘BC Forever’ car and I will make our way forward in the race.”