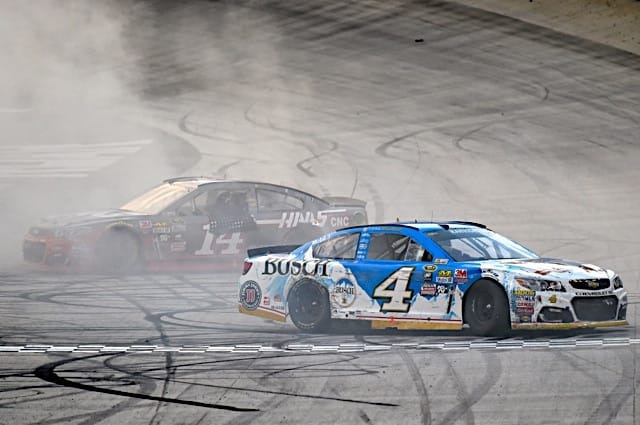 When it came time to celebrate the first victory for Stewart-Haas Racing in the Bass Pro Shops NRA Bristol Night Race, Kevin Harvick had something special in mind.

During the cool down lap following the 500-lap event at Bristol Motor Speedway, Harvick stopped alongside team co-owner Tony Stewart with a request – join him on a victory lap in celebration.

However, when Harvick began doing a burnout on the frontstretch, Stewart elected to join him for the burnout and lit his tires up in a touching moment for the fans remaining at the Bristol, Tennessee oval.

“I wanted him to go on a victory lap with me and say goodbye to all the fans one last time here at Bristol,” Harvick said. “But that was pretty cool, doing burnouts with him.”

Following his final race at the .533-mile concrete oval, an emotional Stewart shared his appreciation of Harvick’s decision to honor him.

“That is cool,” Stewart said. ” The funny part is he got out of his car, got the flag and then he goes ‘get in my car and go to Victory Lane with me.’  I went what?  He goes ‘yeah, just leave yours here.’  I’m like I just can’t just leave my car there, but that was cool.”

Reflecting on his final moments as a driver an the Last Great Coliseum, Stewart acknowledged making the most of his last laps.

“Well, I will see it in the spring.  I will be back here.  I just won’t wear a helmet when I come back here,” Stewart said. “It is cool.  This place is so much fun.  I told myself the last 10 laps we weren’t racing anybody, there wasn’t anybody around us, I said, just enjoy these last 10 and just savor the moment and think about it.  So, that is what I did, I really thought about what I was doing those last 10 laps and kind of soaked it all in.”

Stewart, who finished 30th in the 500-lap event, has just 12 starts remaining in his final Sprint Cup Series season.

Hello I’m a huge Stewart Haas Racing fan. I have been a fan sense it was started. I’d like to download picture of Kevin Harvick and Tony Stewart burning out at Bristol Motor Speedway August 21 for the purposes of as my Facebook cover photo and also for my Stewart Haas Racing page.