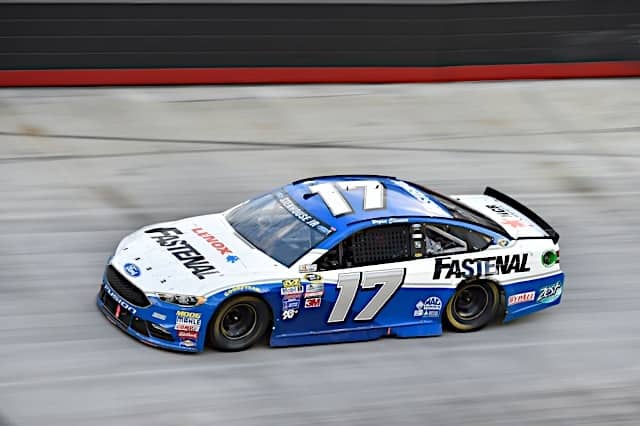 Ricky Stenhouse, Jr.‘s quest to “park it” for the late Bryan Clauson may have fallen short, but the fourth-year driver left proud of his effort after an emotional second-place result.

Coming just two weeks after Clauson succumbed to injuries sustained in the USAC Belleville Midget Nationals, Stenhouse and sponsor Fastenal elected to honor the former NASCAR Nationwide (now XFINITY) Series driver by running the livery Clauson used from 2007-2008. Adding to the moment, Lauren Stewart, Clauson’s fiancé, and other members of his family were present at the track on Saturday night before the race’s eventual postponement.

Much like Clauson was known to do nationwide on dirt, Stenhouse used the high lane to rally through the field from two laps down and rise to second in the closing moments of Sunday’s Bass Pro Shops NRA Night Race at Bristol Motor Speedway.

“We knew we were going to have to get everything perfect, and it took me a minute to get the top going,” Stenhouse said. “I wanted to give up when we were two [laps] down, but I remembered we had Bryan Clauson’s tribute car here, and his favorite helmet, and I dug deep and the guys dug deep and made a lost of changes that made our Fastenal Ford a lot better.

“We really wanted to park it in Victory Lane for his whole family and all of his friends and fans for Tim, Di, Taylor and Lauren his fiancée… Just a little bit short.”

The performance was important to Stenhouse, who was close friends with Clauson in USAC before his passing. Stenhouse was watching the Belleville Midget Nationals and saw Clauson’s fatal accident live.

“I just had a feeling that it wasn’t good,” Stenhouse said. “I started Saturday night and went through a roller coaster that whole night. I was getting updated throughout the night and I was up until about 2 o’clock, 2:30 that morning.”

Stenhouse later assisted in honoring Clauson, pacing the field in his 17w before the Knoxville Nationals and attending his service before coming to Bristol to run with the tribute livery, an experience proved difficult, but rewarding for the Roush Fenway racing driver.

“It’s definitely been tough, but going to Knoxville and being with his family, being with his fiancée [Lauren], and being with friends – we all had a great time together, talking about it, talking through things, and talking about all the good things that Bryan did, and his organ donation really helped a lot of us really feel comforted with what he was still doing after the fact. The service [this past Thursday] was one of the toughest days that I think I had. But just telling stories, really I think helped us get through it.”

Stenhouse will honor Clauson one last time on Wednesday, joining in the celebration of Clauson’s life at Kokomo Speedway.

“We’re looking forward to Wednesday and Kokomo, Indiana, having a celebration of life for him,” Stenhouse said. “A lot of good friends are going to be there so it’s going to be a lot of fun.”

And while Stenhouse might have wanted to get a victory, those who saw his effort were proud of his accomplishment nonetheless.

We're happy with 2nd, Ricky!!! Proud of you. ? pic.twitter.com/wLMNKpbKTS