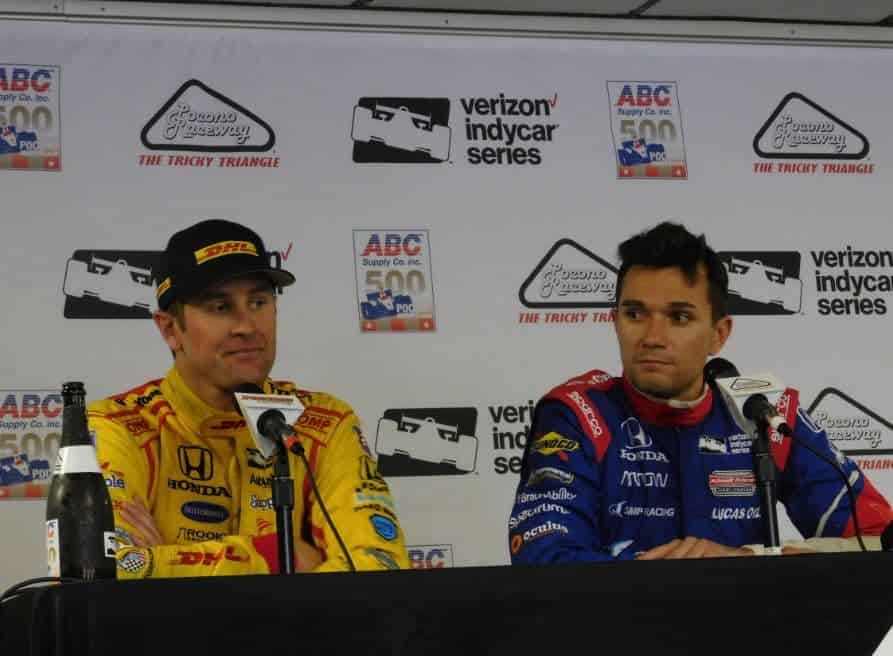 Though they were two of the quickest cars in Monday’s ABC Supply 500 from Pocono Raceway, a checkered flag was not in the cards for both Ryan Hunter-Reay and Mikhail Aleshin.

Coming home second and third behind winner, Will Power, their two winless seasons will continue onto the final three races of the 2016 Verizon IndyCar Series season.

However, there is no shortage of confidence following the colorful drives by both men.

For Hunter-Reay, the defending Pocono winner started the weekend with a savage practice accident on Saturday morning, leading to no time turned in qualifying later that day. Starting from the 22nd and final position, a wicked start saw the No. 28 DHL Honda jump to the outside in what he called a “hero-or-zero moment” in turn 1.

Reaching the lead on lap 49, Hunter-Reay would spend 33 laps out front before an unexpected electrical problem forced the 2012 champion to pit road.

“The engine shuts off while we’re leading,” Hunter-Reay said. “I can sit here and sound like a whiner but it’s so frustrating. I cycled the car twice and it didn’t re-fire. Then I was in pit lane, almost stopped, I thought ‘Let me clutch it one more time.’ I cycled it again really quick and it fired.

Restarting one lap down, Hunter-Reay grabbed a wavearound from the final caution of the race to return to the lead lap. Flying through the field from 14th, Hunter-Reay drove past Josef Newgarden with two laps to go to claim third spot at the checkered flag.

Though a powerful comeback, Hunter-Reay calls the result “very disheartening.”

“I just ran out of time,” he said. “I can’t help feel like that No. 28 DHL Honda should’ve been in Victory Lane today. It was there when I needed it. There’s very few times in your career you get a car you’re completely in line with and it’s doing everything you need it to. And that’s what I had today.”

Another car that showed strong speed throughout the weekend was Mikhail Aleshin, who won his first career IndyCar pole on Saturday before leading a career-high 87 laps in Monday’s race.

“It’s definitely important for the whole team. First of all, I got my first pole. And second of all, fortunately, I was hoping to win but Will was just faster today. We were up there all the time so I think we definitely could’ve won this race but not under these circumstances.”

Indeed, with a 21-lap dash to the checkers, Aleshin’s No. 7 was unable to get around leader Power, who led the final 35 laps en route to victory.

Tying his career-best effort in his 31st career start, Aleshin will reek of confidence come the next oval race at Texas Motor Speedway next weekend.

“For the team confidence, it’s a very good result,” he said. “It’s not been an easy year for us but I hope the end of the year, we’re going to continue.”