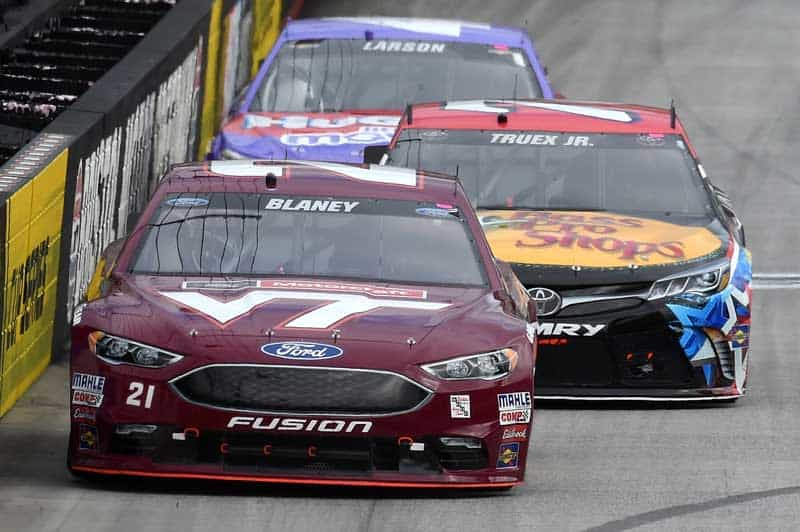 About an hour before the race finally resumed, nearly a full day after the green flag initially waved on the proceedings, a great friend of mine texted me asking whether or not a divine power hates NASCAR. Now this friend was a former die-hard, never-miss-a-race NASCAR fan of many years. But the Chase, and associated changes to the playoff system, has seen his interest wane to the point that it’s mostly facetious text messages. But it did get me thinking because that really was about as bad a marquee weekend as you could get. As it turned out for me, living on the West Coast, it was a nice Sunday afternoon race once it finally got underway. But still, for most of those poor folks who spent their hard earned money for the night race spectacular, it was a 48-lap prelude, a long sad trip home and nothing more. Let’s face it, we’re used to empty seats in the stands these past few years but to see the huge venue so bare was a real slap in the face even if there were hugely mitigating circumstances. NASCAR races in too many places across the country over such a long season that it’s inevitable we’re going to have some weather delayed but when the race is one of the “crown jewel” events of the season it’s just a massive shame. On to the next one, folks. On to the next one.

What a finish that was for surprise Pocono race winner Chris Buescher. The fifth place effort was enough to see Buescher vault team-mate David Ragan into (Chase eligible) 30th place with the wheelman from the marvelously named Prosper, Texas now 13 points to the good. “That’s Chase eligibility (gained) in one race out of the four we had to do it,” said Buescher in post race interviews. “Now we have to hold on to it.” And with just three races left on the schedule before the playoffs begin, why can’t the kid hold on to that precious and elusive playoff berth. At least now his path to success is in his hands. Ironically, it’s the former driver of the No. 34, David Ragan, who is the closest to nixing Buescher’s unlikely playoff berth with the veteran in 31st, 13 points behind. The next closest, Regan Smith, is some 35 markers off the pace with Brian Scott a further two points behind Smith in 32nd. “It’s a good scenario,” noted Buescher of his points standings. “We’ve got some good tracks coming up for us that we’re ready for.” The win is secured, he’s made the top 30, now he just has to hold it. Here’s hoping he manages to do just that.

THREE: Still no word on a Title Sponsor
We’re now approaching September and still there’s no word about who will replace Sprint as the Title Sponsor of NASCAR in 2017 and beyond. According to a report by Adam Stern in the SportsBusiness Journal, NASCAR has “zeroed in” on “around” three leading candidates. Term sheets have been swapped with at least one of them which suggests that a decision, if not close, is certainly nearer. I’ve written before about the immense cost of becoming the new title sponsor and you would have to think NASCAR would have hoped for a ten-year, billion dollar plus commitment commensurate with their TV deals — not that they are likely to get anywhere close to that. The deal on the table, according to unnamed sources, is in the four year, $25-35 million range. Sprint’s deal, by comparison, was worth $75 million in “annual rights and activation fees.” Now compared to where they’ve been in the past, and likely what they projected, these new numbers would be a relatively small commitment from a title sponsor. Put another way, it gives the new company a chance to hedge their bets slightly. Hopefully this isn’t a reflection on how they’ll activate. That’s a crucial component of this sponsorship. The new Sprint needs to be hugely visible both on and off the track. And given everything they’ll need to do time is beginning to ebb away ahead of next February and the 2017 Daytona 500. I’ll be watching this space with great interest in the coming weeks and months.

FOUR: Next Up — Michigan

Next up, it’s our second trip of the season to Michigan International Speedway. This will be Cup race number 95, closing in on a century of races, a streak that runs all the way back to 1969. That inaugural race was won by none other than the inimitable Cale Yarborough. Fast forward all the way to the first race of 2016 in mid June, a contest won by Joey Logano who dominated – leading 138 laps of the 200 on the way to his first win of the year. Greg Biffle has the most wins of any active driver with four while many of the other statistical categories are led by Jeff Gordon (top-5’s – 19, top-10’s; 27, poles – 6; laps led – 1059). Gordon, of course, will not be racing this weekend due to a prior engagement with Alex Bowman set to fill in if Dale Earnhardt, Jr. is not medically cleared. Should that not be the case, Gordon would again fill in at Darlington Raceway but the hope is Junior might be ready to resume his driving duties by then. Given the speed necessary to win a race at Michigan, it does seem likely that a previous 2016 winner will take the checkered flag but as always with NASCAR, as we saw with the weather this weekend, anything can (and probably will) happen.

And finally this week, after a disappointing weather impacted race weekend, how cool was that double burnout with race winner Kevin Harvick and his team owner Tony Stewart after the Bristol race finally and mercifully concluded. Clearly neither driver is going to win any hand signal awards any time soon, but that was still a really cool deal – as they say. Stewart is really making the most of his final season. And who knows, maybe there’s a fourth championship out there for him before he’s said and done.

Come on! Not even close. Seriously where are the editors? They are not teammates.

@EBSNASCAR – that’s my mistake (not the editors). Not sure what I was thinking! Thanks for pointing it out.