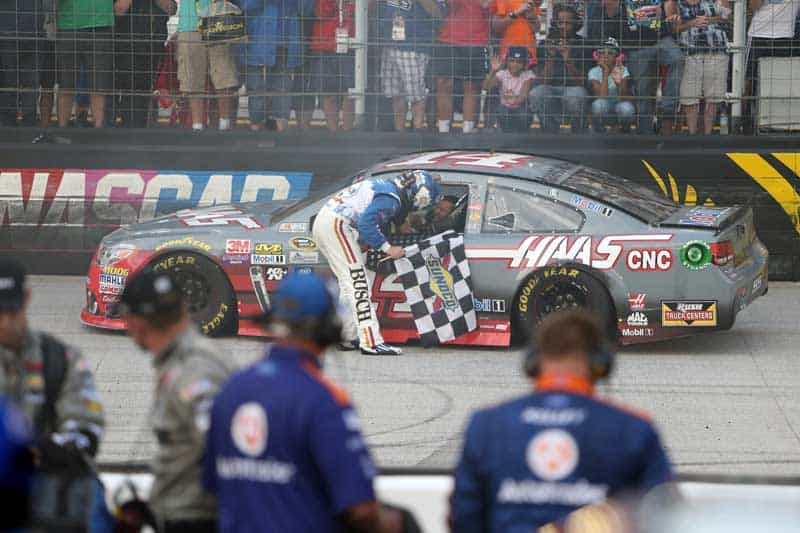 If you were paying attention to the final weekend of the Olympics in Rio, you might have noticed that the men’s marathon took place on Sunday morning. But for NASCAR fans, and especially for those in attendance at Bristol Saturday and Sunday, the NASCAR marathon took place this weekend as well. It wasn’t quite 26.2 hours (compared to 26.2 miles run in a real marathon), but it was close enough.

HOT
Kevin Harvick got an early win this season in March, so his Chase spot has been secured for quite some time. But Harvick may have made a bigger statement about trying to win a second title with the way he and the No. 4 team performed at Bristol. Harvick got better as the race went on, but maybe the best things about his win happened after the race. First, he had retiring driver and current car owner Tony Stewart join him in doing a double burnout near the start finish line afterwards in Stewart’s final appearance at Bristol. Then later in the night, Harvick crew chief Rodney Childers tweeted many thank yous out, but it was especially nice that he mentioned the faithfulness of the fans over the weekend.

NOT
One thing about when NASCAR comes up with a new rule, or a new way to enforce a rule, teams generally find a way to bend it to the max, without breaking it. So when NASCAR went to a computerized timing system for pit road speed, the teams figured out where the timing lines were and then knew they could speed up a little entering or exiting their pit stalls. Now, with extra timing lines, that little bend in the rules is gone. One driver who has felt the effect of that is Denny Hamlin, who has eight pit road speeding penalties this season. The lesson here is if you can’t drive 55 (or whatever the pit road speed limit is for a race), you’re most likely going to get caught.

HOT
One of the obvious things about NASCAR that happens over and over again is how the community responds as a family in the midst of tragedy. When dirt car – and sometimes IndyCar and former XFINITY – driver Bryan Clauson lost his life in an accident earlier this month, the response was overwhelming. Then Ricky Stenhouse, Jr. added to that by wearing Clauson’s favorite helmet to honor him while driving to a second-place finish at Bristol Sunday night. It would have been quite a victory celebration had he won his first Sprint Cup race while honoring Clauson.

NOT
It was another hard luck and bad news race for Kyle Larson. His cars have been Chase worthy in terms of speed and performance, but his luck has been pretty much the opposite. It happened not once, but twice, to him at Bristol, where he simply was in the wrong place at the wrong time. Larson ended up driving his taped up, damaged car to a 24th-place finish and he now sits 39 points behind Ryan Newman for the final Chase spot. The No. 42 will definitely be in a win at all costs mode for these final three races ahead of the Chase.

HOT
You have to admit that even though you might like Chris Buescher some, and that while any driver will take a win any way they can get it, his first career victory, thanks to the Pocono fog, was fluky. But Buescher made a pretty good statement Sunday by finishing fifth at Bristol and putting himself 30th in the points, 13 ahead of 31st place David Ragan. Buescher still has no guarantees, but a couple of more finishes like that will show that Chase city is the right place for him.

NOT
Speaking of Pocono, you probably noticed the IndyCar race there was rained out from Sunday to Monday. While Will Power (there are just all kinds of possibilities with that name) came away with the win, the rainout made Pocono a perfect (or maybe imperfect) three-for-three in having all three of its major Sunday events rained out this year. Some pretty crazy bad luck there.

Predictions
The Sprint Cup series heads to Michigan this weekend and with the Chase spots on the line, it will be interesting to see if there are some gamblers when it comes to late-race pit strategy. So for this week, I’m going to go with Joey Logano, because the Fords generally do quite well in Michigan. The deep sleeper underdog who you might not think about pick for Michigan is Paul Menard. He has three top 10s in his last five races there for an average finish of 9.2