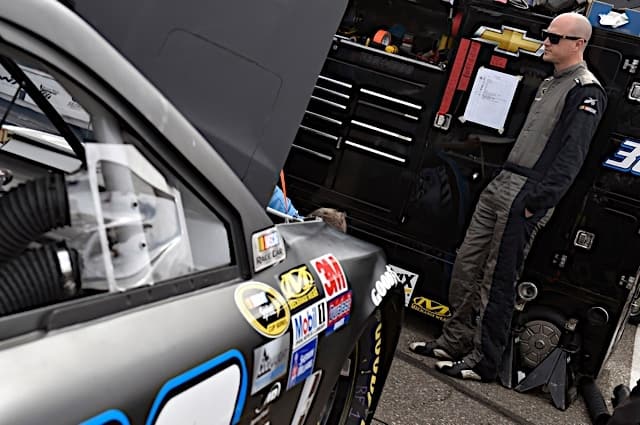 Josh Wise is no longer a start-and-park driver. His days of entering the Sprint Cup garage after a handful of laps on race day are long gone.

However, Wise has continuously faced adversity in his time at NASCAR’s premier level, going from the ego-lowering start-and-park jobs, to losing his job eight weeks after giving a team its only top 10 in the Cup Series. This year, the adversity continues, spearheading The Motorsports Group’s entry for its first full season in NASCAR’s top division.

The organization’s flat black No. 30 Chevrolet is getting by on making ends meet, just like a handful of other teams without a charter. But according to Wise, not having a charter is just one small missing ingredient for the underfunded crew. We spoke with wise at Pocono Raceway, discussing the underdog role, what the team needs to work on and how difficult 2016 has been for the crew.

Joseph Wolkin, Frontstretch.com: You guys don’t have a charter this year, but what’s been the biggest struggle for your team?

Josh Wise: That’s probably the least of our struggles. We’re a new team, so to pinpoint one big struggle would be a challenge. I would say it’s getting the people and personnel built up to the right level we need to be at to really compete where we want to in the Cup Series.

Wolkin: How many people do you guys have at the shop?

Wise: We have five people here [at Pocono] this weekend and two guys at the shop. There’s a fine line of getting good people and getting people who can do a good job and not just hiring people to fill space. That’s the biggest challenge as a new team. The largest teams do a really good job at hiring great employees and retaining them. We’re in a position where we take chances on some younger guys, and we try to train guys, things like that.Even as a smaller team with fewer resources, all of the other boxes we have to check to get where we want to be, people are the most critical aspect of it.

Wolkin: How would you compare this to your situations with Front Row Motorsports and Phil Parsons Racing?

Wise: At Phil’s we never start-and-parked, but it was a different situation because they had done two or three years as a start-and-park team with [Michael] McDowell. When I made the switch over there, it was because they were going racing full-time. They were ready to race because they had two-three years of time at the track, even though they weren’t racing full races up to that point. We actually made a really solid transition into that. I felt like we raced really well there. Things went well and because of that, we already had personnel, notes, processes in place, where we have none of that at TMG. It’s a building process all the way through.

Wolkin: How do you feel like you’re going to get to that point with the team?

Wise: It takes time. Time, money and hard work. It’s a pretty simple formula. We need to train guys, putting in the right time with the right people, taking really good notes and this [Pocono] is the first track we’re coming to for the second time and we’re better already than we were in the spring. We’re making forward progress. It’s measurable and we need to keep pushing forward.

Wolkin: How frustrating has this season been for you given that – like you said – you were running well before you left Phil Parsons Racing?

Wolkin: How do you stay focused without letting the frustration get to you and knowing you have the ability to run better?

Wise: You just don’t get caught up in that mentality. There are so many factors that are out of your control and in your control. The only thing you can control is what you’re doing at any given moment. Doing my best at every given moment is all I can do.

Wolkin: What do you feel like the expectations are for the team heading into the latter stages of the year?

Wise: I don’t think you can put a number on it because there are too many external factors. I think the expectation is to make measurable gains. When we come back to these tracks and have more speed than what we had before, we need to make less mistakes, less mechanical issues, to go through practices smoother and give better feedback. Those are expectations you need that are attainable and realistic, whereas you’re looking at the leaderboard and saying you want to be 30th every week. It’s not the right way to go about it.

Wise: We only buy two sets of tires every week, and then we buy used tires from the other teams. That’s a big box we have to check as we get funding going forward. Right now, it’s more important to be faster so when we do make that next step and raise the level in the areas that are really obvious that we can have more speed with, that we make a really large jump at that point.

Wolkin: Speaking of funding, just how difficult has it been for you over the years to try to get sponsors?

Wise: It’s challenging, obviously. I think that you’ve got to be really creative and you’ve got to have the right relationships and connections. We’ve had funding – not with TMG so much – we’ve had a few sponsors this season. Stuff in the past has come and gone. I’ve never had that full-time, season-long, high-end sponsor that really brings a team to the next level. That’s something we work on all the time, but in the end, it has to make sense from a business standpoint for a company and from a relational standpoint as well.

Wolkin: NASCAR changed up the aero package for both Michigan races. How difficult are those races for you guys when you’re already behind the bigger teams?

Wise: It’s a challenge like you would expect. We get our cars from teams that don’t use their cars anymore. It’s outdated technology when we get them. We’ve got to try to figure out how to get it up to date.

Josh is one of the truly great guys at the track. I want to see him succeed on and off the track!