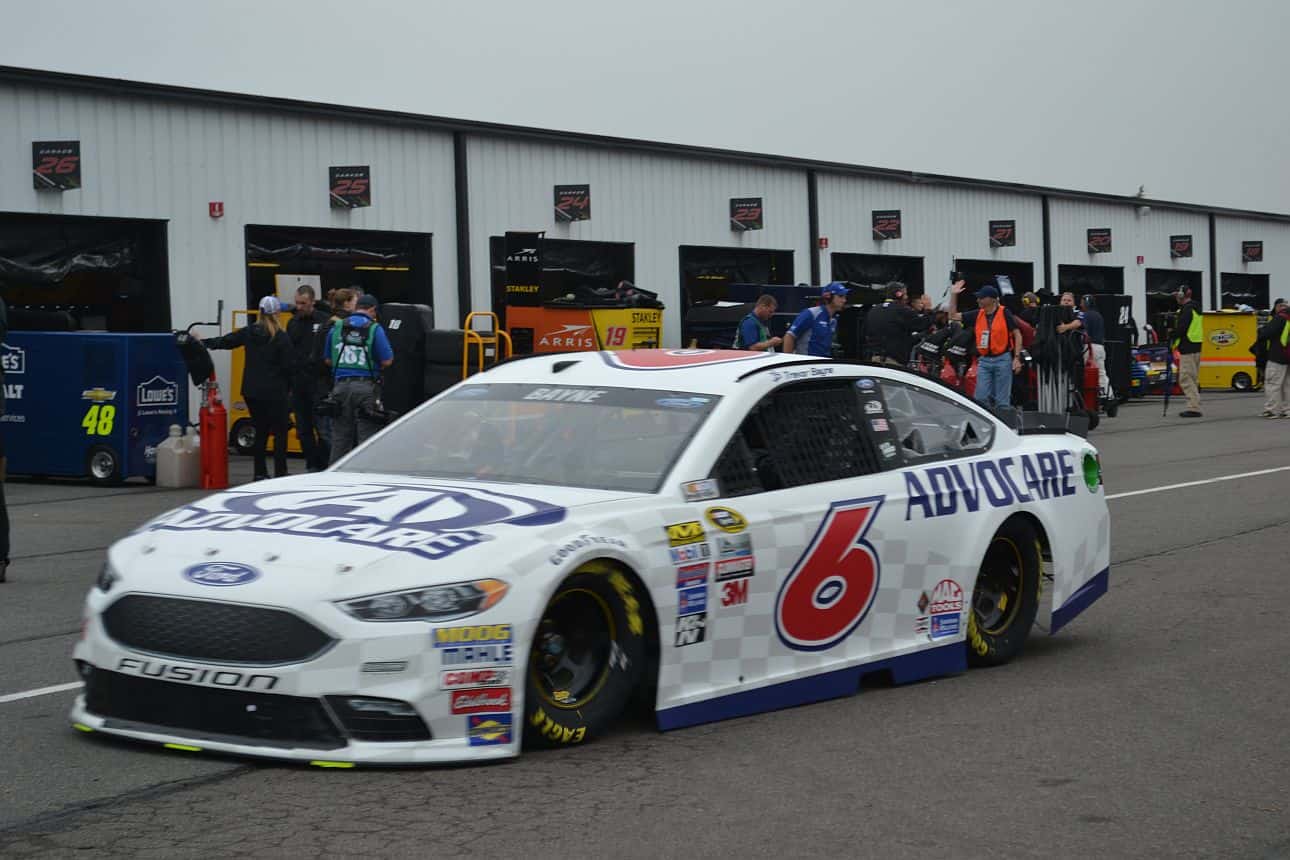 No one expected Sprint Cup Series rookie Chris Buescher to win at Pocono Raceway. In fact, no one expected his Front Row Motorsports team to even be in contention for the Chase.

Buescher’s triumph was evidently a case of David v. Goliath, the famous Bible story that breaks down the journey of a small, determined man versus a beast. As most know, David won and became a king.

While Buescher might not be a king, he is certainly in royal territory in 2016. Taking advantage of NASCAR’s Chase for the Sprint Cup format, Roush Fenway Racing is increasingly stepping up its aid to Buescher’s No. 34 squad. At Bristol, he ran incredibly well, finishing fifth and finally breaking into the top 30 in the standings, which is good enough to put him in the Chase, if he can stay there.

With Buescher playing the role of spoiler, he has inadvertently kicked one of Roush’s drivers outside of the Chase Grid. That driver is Trevor Bayne, who has been ascending throughout 2016 as a consistent contender for top-15 results. However, there is still time to see who will make the Chase and who won’t.

Meanwhile, over on the Chevrolet side of the garage, the future is looking bright. The bowtie group was uncertain about the next few years, with the exception of Chase Elliott staying with Hendrick Motorsports for the long-term and Cole Custer eventually moving up the ladder at Stewart-Haas Racing.

Adding William Byron to its developmental program, HMS should feel like it’s heading in the same direction as it was when it signed Elliott. The feeling of knowing one of the team’s future drivers could develop into a star is certainly nothing new for the team, and it will be quite interesting to see how he does in a Chevrolet.

Q: Who is the wildcard driver that’s not currently in the Chase with the best shot to make it in? – Nico, New Jersey.

A: There are a mere three races left until the Chase Grid is set. After Richmond, 16 drivers will battle it out for the prestigious Sprint Cup title.

While there have been 12 different winners already this year, there are still four open spots remaining. With the next three tracks – Michigan, Darlington and Richmond – being drastically different in terms of handling and track characteristics, it is quite possible we will not see a repeat winner. The last time there was a repeat winner in the last three races before the Chase was in 2012, when Denny Hamlin won back-to-back races at Bristol and Atlanta.

If none of the drivers outside of the Chase Grid as of now are able to win at one of the next three tracks — or run very, very well — they have a shot at being in NASCAR’s version of the playoffs.

While it seems simple to do, it truly is not.

Michigan will be using the same aero package that it had earlier this year, giving cars less downforce, something drivers continue to plead for. Darlington, too, will be a challenge given its unique egg-shaped surface. The same can be said about Richmond, a track that continuously presents challenges to drivers.

Trevor Bayne is the one driver on the outside looking in who has been stepping up to the plate as of late. Since Daytona in July, he has an average finish of 15.29, which is better than Ryan Newman’s mark of 16.43. Newman holds the final spot on the Chase Grid entering Michigan, holding a 35-point gap ahead of Bayne.

Bayne was told entering Bristol that he can make the Chase if he runs in the top 10 for each of the remaining four races. While that may be a bit of a stretch, he will need just a bit more than a few consecutive top 10s. His comfort zone ahead of the next two guys behind him, Kyle Larson and Kasey Kahne, is a mere four markers. That deficit can be erased with one small mistake.

However, Bayne has an advantage for the next few races. Michigan is known to be one of Roush’s best tracks, with 13 wins at the two-mile oval. In his limited time in the Cup Series, he has been strong at the track, finishing ninth in this race last year and 15th in the spring.

Meanwhile, another factor that plays into Bayne’s favor is he is the most consistent driver outside of the Chase. It comes as a surprise that he’s been so consistent in 2016, already earning four more lead lap finishes than his mark of 13 through 2015. But Bayne is showing he is the comeback driver of the year, and a Chase berth could be the icing on the cake for the No. 6 team.

A: This move is surprising – or maybe not so much – depending on how you look at it. On one hand, it’s crazy that Byron would leave the most dominant organization in the XFINITY Series for nearly a decade. On the other hand, it’s understandable considering the limited space Toyota has to offer.

Byron leaves a situation at Toyota and Joe Gibbs Racing that was clearly uncertain. The manufacturer is stacked with talent for years to come.

Erik Jones is moving to the Cup Series next year with Furniture Row Racing, essentially giving Toyota its sixth premier team, in addition to the two BK Racing cars. Daniel Suarez, who currently sits second in the XFINITY Series standings, is also expecting to move up to the Sprint Cup level sooner rather than later.

Oh, and let’s not forget the plethora of prospects Toyota has, including Cameron Hayley, Ben Rhodes, Rico Abreu, Matt Tifft, Christopher Bell and Todd Gilliland, amongst a handful of others.

With more drivers than available space for them in NASCAR’s top two divisions, Byron made the wise choice. Heading to Hendrick Motorsports, he enters a situation that gives him a full-time seat with JR Motorsports, a team that is known to be among the title contenders in the XFINITY Series year-in and year-out.

Essentially, Hendrick Motorsports might have just made up for losing Kyle Busch to Joe Gibbs Racing in 2008, in what would’ve been his fourth year in the No. 5 car. When HMS lost Busch to Gibbs, no one expected a guy who had four wins in three years would end up winning eight contests within 36 races. But guess what? It happened.

Not only did Hendrick Motorsports lose out on Busch, but it lost out on Brad Keselowski after the whole a mid-2009 fiasco that sent him to what arguably became a much greater situation for him at Team Penske, leading to a championship in 2012.

And HMS might have just gotten a gem in Byron, who has won five Truck Series contests in his rookie year and is clearly a title favorite.