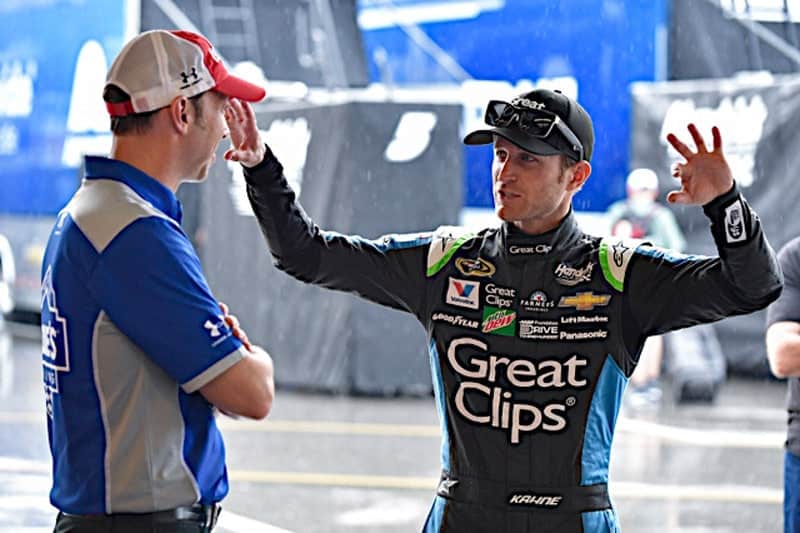 Silly Season has been rather tame this far in 2016, but there’s still time for teams to make changes.  Which teams need a shakeup the most, and should it be driver, crew chief or something else?

John Douglas, Contributor: It’s abundantly clear that the No. 5 team of Hendrick Motorsports needs a huge shakeup. The driver and crew chief roles are stale and so far underperforming; I was surprised this didn’t happen last off-season, contract or not. Get Kasey Kahne out of there; Kyle Larson needs that ride as much as the ride needs him. Larson’s equipment is the letdown to his career so far, and the No. 5 would really give that a boost.

Bryan Gable, Staff Writer: Hendrick Motorsports has not performed up to its usual standard this year, but I think the problems within the No. 5 team run deeper than the rest.  Swapping out crew chiefs and other personnel has not produced an uptick in performance, and it looks increasingly like Kahne and Hendrick would both be better off parting ways.  And speaking of struggling teams, where has Richard Petty Motorsports been this year?  Aric Almirola and Brian Scott have a combined zero top 10s through 23 races.  I would not let either of the drivers go (and I would think twice before splitting up Almirola and Trent Owens), but the organization really needs to bring in some new people or switch around its current team members.  Danica Patrick is without a top 10 as well, but she will keep her seat in the No. 10 car as long as the sponsorship dollars keep rolling in.

Mark Howell, Senior Writer: Hendrick Motorsports needs to totally restructure the No. 5 operation. There’s a lot of stagnation there that seems to be affecting all aspects of the team. New personnel across the board might revive what should be a competitive and consistent outfit.

Amy Henderson, Senior Editor: Since everyone else is bagging on the No. 5 team (deservedly so), I’m going to look at a couple of teams deeper in the field who have fallen back a couple of steps this year.  One is for sure, as Bryan noted, RPM.  Up to last year, I’d have definitely classified it as a mid-tier team, but this year it’s slid back even further.  I think the team needs, among other things, a different driver in the No. 44.  The Brian Scott buy-a-ride hasn’t worked out too well for anyone; RPM needs more talent in the seat.  The other team that’s fallen back in a year where it should have improved is Germain Racing.  In that case, I’d like to see a crew chief change; when Darian Grubb was available in the offseason, I thought he’d be a perfect fit at Germain with Casey Mears, a driver with whom he’s won in the past. A different ear on the radio might benefit the driver, who communicates very well, in that maybe different changes are needed than current head wrench Bootie Barker knows how to make.

Many of his fans await the return of Dale Earnhardt, Jr., but let’s look at the bigger picture in this. Has Earnhardt’s absence due to concussion-like symptoms had a negative impact on the sport as a whole?

Gable: It’s fair to say that Dale Earnhardt, Jr.‘s fans probably have less interest if he is not racing.  So that’s not good for the sport if it means that less people are watching.  But beyond Earnhardt’s fans and conversations about how to deal with concussions, racing, and life, goes on.  The overall negative impact of Earnhardt’s absence really depends on how much positive attention each fan pays to the driver himself.

Howell: I think Earnhardt’s recent health concerns have been great for the sport in that it gives NASCAR some much-needed context within the arena of mainstream sports. There’s been plenty about concussions in football, yet there’s a tragic history of such injuries scattered throughout automobile racing. Just because racers get in accidents from time to time is no excuse to disregard the presence of CTE and the inevitable nature of brain injury.

Henderson: Look, if the absence or presence of one driver could bring the sport to its knees, NASCAR would have been gone decades ago.  Yes, Earnhardt has a large fan base, and his personality and heritage are both great for NASCAR, but the sport had superstars before and it will have them long after he retires.  Traumatic brain injuries are no joke, and anyone who thinks Earnhardt should rush back in order to appease fans or NASCAR is delusional.  As long as he’s not ready he’s a danger to himself and others on the track.  Better sidelined for several weeks than to end up an unfortunate statistic.

Douglas: Earnhardt’s absence was always going to have a certain negative impact, but NASCAR has done a lot to curtail that issue. Between Jeff Gordon‘s return to the driver’s seat and Chris Buescher‘s win (and subsequent entry into the Chase), there have been great storylines to follow in the past few weeks. A race fan has a lot to be happy about with the 2016 Sprint Cup Series. An Earnhardt fan, not so much. Note the distinction.

As teams roll into Michigan International Speedway this weekend, lots of drivers are hoping to change some luck.  Who needs to find Victory Lane the most, and can they do it this week?

Howell: The next three weeks are massive for drivers like Ryan Blaney and Kyle Larson. Both need to score wins to get a seat at the grown-ups table come Chicagoland Speedway. There are too many hangers-on around the top 16 to think that someone like Blaney or Larson can simply point their way into the Chase. It’s go time for these two.

Henderson: The Chase field is about set—I don’t see another new winner (though there are a couple of teams left who could be capable if the universe aligns), so I’m looking more at at drivers like Jimmie Johnson and Carl Edwards, who won multiple races early on this season but haven’t been able to get back to the top since.  In this case, Edwards is better off than Johnson in that he’s with a team that’s pretty much had a stranglehold on the Cup Series this year, but both have had a bit of a summer slump in the win department, and momentum goes a long way.  Either one could win it this week, and it would give them a boost as the Chase approaches.

Douglas: Kahne and co. at the No. 5 car desperately need a strong run at Michigan and the following races to show improvement in performance with William Byron now a direct contender for a Hendrick Cup ride in the next few seasons to come. AJ Allmendinger has been trying his backside off the past few weeks, and with his downtrodden attitude at the past couple races, look for Allmendinger to turn his frown upside down with a couple strong runs as he puts his head down and refocuses. Whether either can win at Michigan is doubtful, but a solid run can go a long way toward finding Victory Lane.

Gable: Anyone outside the Chase cutoff but within the top 30 in points needs a win.  Realistically speaking, though, a victory  for the drivers who are closest to the bubble would have the biggest impact on the points standings. Larson has left a lot of points on the table the past few weeks, and winning could be his only way forward now.  Trevor Bayne could use a little luck too.  He has shown a lot of improvement this year and is Roush Fenway Racing’s best hope for the Chase, but it will take three strong races from the No. 6 team (or a win) to reach the postseason.

Hendrick Motorsports announced last week it has signed William Byron to a contract to driver for JR Motorsports in the XFINITY Series next season.  Was the move a shot across the bow to Joe Gibbs Racing and Toyota, and was it the right decision for both sides?

Henderson: Of course it was. Anytime a team can snatch a talented person from a competitor, it’s a coup (and it happens all the time, though it’s rarer with drivers then with other crewmen).  But it’s not malicious to want to make your own teams stronger, and Byron was stuck in a long line of young talent with Toyota because it only really has two elite teams in its stable. He chose to move to a team where he’s got a real shot of making the Cup Series within the next three or four years as the organization’s only development driver in a national series while two of the drivers are over 40 and a third is getting close and can’t buy a race worth of luck.

Douglas: Byron meant no ill will to JGR with his move, but make no mistake. Rick Hendrick just sent a torpedo straight into the hull of the Toyota fleet. With Furniture Row Racing’s two seats full, JGR’s four cup seats and three XFINITY seats taken, Byron was left to ask one simple thing: Do I really want to be stuck in a Truck Series ride as a champion, or do I want to move on with a solid team and further my career and exposure? It doesn’t hurt that all involved at Hendrick seem to have a long history with the youngster. It was no doubt the right move for Hendrick Motorsports, but Toyota and JGR just missed out on a huge commodity. Timing is everything in this sport, and JGR just got caught on the wrong side of it.

Gable: Hiring Byron is more about Hendrick preparing for the future and less about taking a shot at JGR directly.  The name of the game is to develop the best driver lineup possible, and Hendrick saw an opportunity to get a talented young racer.  Losing Byron is not a good thing for JGR or Toyota, but it is not surprising that one of their prospects slipped away.  As for Byron himself, there is every reason to believe that he will thrive with Hendrick and JR Motorsports.

Howell: Byron’s signing should be treated as Jeff Gordon 2.0. When rumors abounded that Gordon was going to get a contract from Ford, Hendrick assessed Gordon’s obvious talents and asked him if he had signed with the Blue Oval Bunch. Gordon said no, Hendrick said OK, and the rest is NASCAR history. Signing Byron was merely a matter of getting the upper hand over other suitors. I hope the gamble pays off as well as it did with Gordon.

How do Rousch and Biffle get a pass. I like Biff but the results are just bad. That team has been in decline since Mark Martin walked away. (Ready to tell the real story yet, Jack?) First Matt bails then Carl joins him. He no longer has much support in Dearborn either, that has gone to Roger.