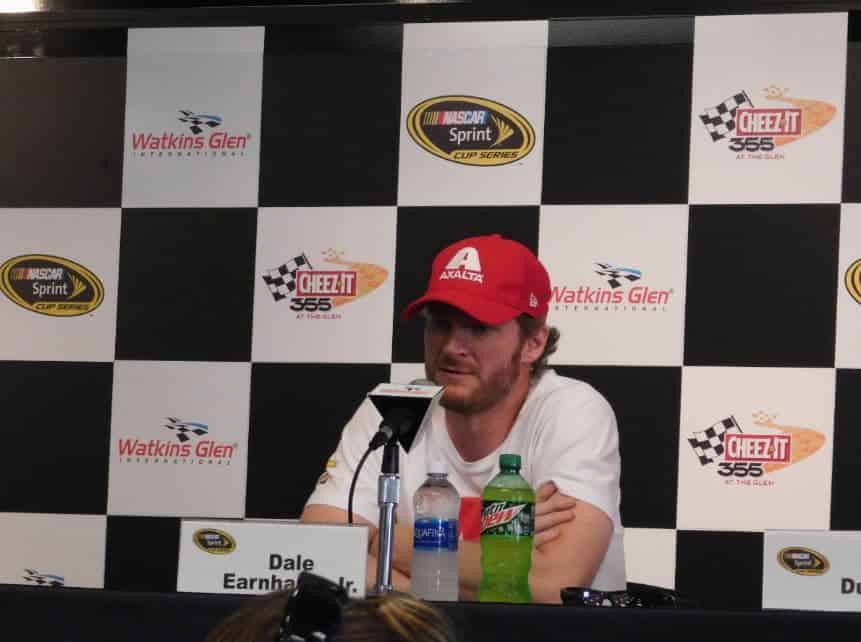 This upcoming Sprint Cup race at Michigan will mark the sixth straight that Dale Earnhardt Jr has missed due to his concussion.  All he can do is watch as Alex Bowman takes over his car for the second time this season.  Earnhardt will also miss his seventh race next weekend, when Jeff Gordon returns to the No. 88 at Darlington.  After doing some of that math stuff, the numbers would seem to indicate that Earnhardt will have missed nearly 20 percent of the season at that point.  But hey, he’s still Chase eligible.

Earnhardt’s issue is, in many ways, a wild experiment for the sport.  Traditionally, the drivers have been allowed to dictate themselves that they are ready and able to get behind the wheel after an injury.  No one told Ricky Rudd that he couldn’t tape his eyelids open to driver.  Though that story may go down as lore (and may have taken on mythic proportions), the reality is that a driver in such condition probably shouldn’t be driving.

But part of these aspects go into the very tenets of American ideology which incorporates ideals of individuality, can-do attitude and an infusion of hubris.  When doctors dictate that a driver shouldn’t be behind the wheel it takes away the decision-making and makes the driver look as one who is not in the same control that is considered the norm.  Or if you’re taking it from another perspective it looks like nanny-state control and wussifies those in the sport.

Basically it is one ideology doing battle with another – systems in place meant to protect the driver and other competitors versus American individualism and exceptionalism. The reality is that most athletes/competitors need to be protected from themselves at times.  The overriding desire to compete is one that can get in the way of smart decisions and put people in danger.

What to watch going forward is how NASCAR decides to police injuries, after all each driver is a contract agent, which means they don’t technically work for the organization. This matter becomes more cloudy as NASCAR continues not to have their own traveling medical team. Just as important, how do sponsors cover for themselves when their selected driver is not in the car?  Is there a breaking point?

One thought that continues to hang in the ether is whether or not it’s best for Earnhardt to sit out the rest of the year?  That’s a whole different debate.  Regardless, speedy recovery.

Happiness Is…Buescher.  The rules regarding the Chase state that a driver can make the playoffs by earning a win and sitting in the top 30 in points.  At this point most fans can spout that notion while sleeping.  It’s how NASCAR designed things, so apparently the organization likes how a driver who has not missed any races and has just two finishes in the top ten might make the Chase.  From a competition standpoint, it would seem better to have a driver with better stats taking Chris Buescher’s place in the playoffs.

But why?  Would having Kasey Kahne or Jamie McMurray be so much better than Buescher?  All Buescher is doing is playing the rules that everyone else is playing.  When Denny Hamlin locked him into the Chase by winning the Daytona 500, he could have tanked half the season and likely made the playoffs with ease.  Sure, Buescher may not make it out of the first round but that makes him no different than many teams in stick and ball sports that are fodder for the better teams.  So sure, let Buescher and his team steal a spot in the Chase, taking some of the attention and money from the bigger organizations.  Things like this are good and provide interesting stories for a sport that can surely use them.

Happiness Is…Sponsorship.  Elliott Sadler enjoyed a reprieve from the unemployment line this week when his primary sponsor, OneMain, decided that they would not be leaving the sport and would instead be sponsoring him for two additional years.  Regardless of what made the company change their mind, this news is quite the positive for the sport.  Over the past few years it seems like many companies have ditched the sport, citing either a desire to go in a new direction or their own financial issues that accompanied the great recession.

For Sadler and JR Motorsports, the agreement offers a level of stability that one would not have expected for the 41 year-old driver.  While one could argue that Sadler is past his prime (and some might wonder if he ever actually had a prime), he has been a competent and steady driver for the past few years, and even better now at JRM.  With OneMain re-signing, Sadler now has the opportunity to end his career in fine fashion.  Then again, Mark Martin took a decade to retire after announcing he’d leave.

Happiness Is…Power.  Over that past six races in the IndyCar series, Will Power has won four times and finished second twice.  Those numbers are tough to beat.  In fact, those statistics are kind of ridiculous and are tough to match in almost any form of racing (yes, even F1 and its strange parade).  Powers ascension through the standings this season came late as he battled health issues that kept him from training early on.  Now, after missing the first race of the season, he’s second in the standings, just 20 points behind Simon Pagenaud.  That’s the thing that is really wild to remember – Power has one fewer start compared to the drivers at the top and he’s still just 20 points away from leading the standings.  With three races to go Power’s story continues to be one of the more fascinating ones to watch in motorsports.

It’s laughable that media members and fans alike are screaming about how having Chris Buescher qualify for the chase by the rules given makes the chase even more of a joke. These are the same people who had no problem with a cup driver padding his ego by running in a lower series race, and through his own arrogance suffered a major injury that caused him to miss eleven races, was granted a special waiver by the governing body head, and managed to win the championship. If that didn’t make the whole system look like a (sick) joke, how is Buescher, who has won a race, and been in all the races so far this year, being in the chase any different? Personally, and I know he won’t make it passed round one, I hope Buescher makes it all the way to the last race at Homestead. Maybe then, Brian will sober up enough and realize he made a major mistake with his chase idea.

Hi Ken, for the record I think Buescher qualifying for the Chase is a joke, zero consistency or up front side by side. A win as a win, but let’s be real..a gift..not a competitive win. And nothing against him. There will be no asterisks next to his name in the win column, the same as Aric last year. As for the other day, attrition thru and thru, imo. Hey, good for him, but lets not make more out of it than it really was.

I think the abortion know as the Kyle Busch saga last year was pitiful and a insult to the sport. I think the Chase sucks, and no doubt in my mind, scripted with the Homestead “win”. Ahem.. I have no proof, but that is my opinion.

I still am thinking in the sick mind of Brian and the lure of $$$$$, he is plotting how to get the cash cow Little E into the circus know as the Chase. My worthless two cents……

Should Oscar’s last name be Pistolius? (Another lunatic with a gun)