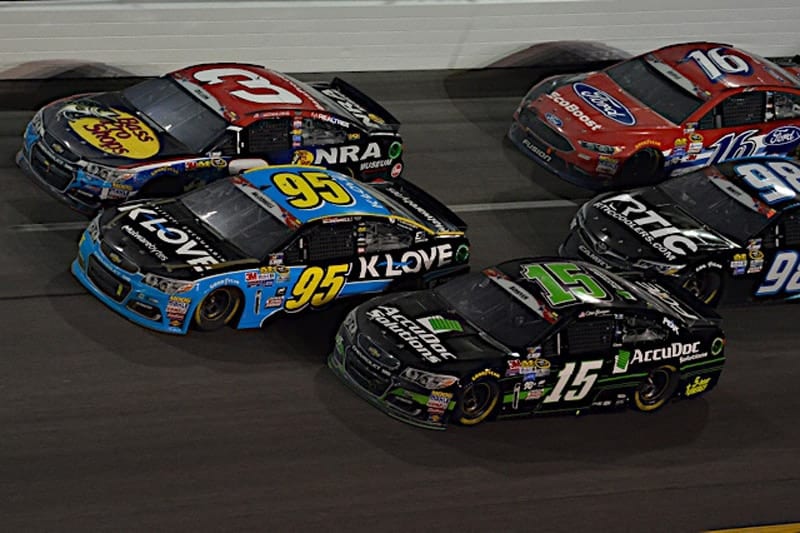 Let’s talk about the NASCAR Sprint Cup Series Chase to the Championship, because there’s only three more races before it begins.

Yeah, for 2016 there are three different Chases across the three national touring series, with the XFINITY and Camping World Truck series also closing in on setting their fields for their inaugural post-season situations.

But in the case of the Cup Chase, we’re talking familiarity. This has happened before, and it’s probably going to happen again. We already know how it’s going to go from experience, with Richmond International Raceway the battleground for the final Chase slots for the last while now. Three races left, 16 spots available, we get the picture.

Well, OK, maybe not 16 spots available per se. Given the series’ win-and-you’re-in mentality, 12 spots have already been claimed, with the top 10 in points currently possessing wins, Chris Buescher in due to his victory and, currently, a 30th-place position in the standings, and then Tony Stewart’s single win and points ranking of 27th that gets him in despite missing eight races due to the waiver afforded to him by NASCAR.

With three races left before the grid is set, that tells you two things: one, anyone who has a win is pretty much locked in barring a missed race attempt or falling outside the top 30; and two, if you win one of the next three races and you’re already set in terms of the other qualifications, you’re golden, too.

That makes looking forward to the next three events, held at Richmond as well as Michigan International Speedway and Darlington Raceway, much clearer in terms of the Chase picture. It’s simple: you win, you’re in. Already won? Don’t need to win, but that cushion won’t hurt.

So, with all that out of the way, who’s actually got a shot of sliding in last minute?

Bear in mind, first of all, that Austin Dillon, Chase Elliott, Jamie McMurray and Ryan Newman currently hold the final four tickets to the Chase by virtue of their current points positions, possessing spots 11th through 14th in the overall standings through Bristol Motor Speedway.

And if there’s anyone from that group that has a shot to lock himself in based on past results, it’s Newman. After all, the driver of the No. 31 has three wins at the final three tracks, with two victories at Michigan and one coming at Richmond. He’s also one of the best in terms of active drivers at the latter, sporting an average finish of 11.7 over 29 starts — behind only Kyle Busch, Denny Hamlin and Kevin Harvick. Not bad at all. Further, though winless at Darlington, his 12.2 average ranks him sixth among drivers who have started at least 10 races at the track, with seven top 5s and 11 top 10s.

McMurray, meanwhile, is likely sweating a little more. Despite wins in the series, he’s never visited Victory Lane at any of the remaining tracks and has average finishes of 18.2 (Michigan), 15.9 (Darlington) and 20.1 (Richmond). Terrible? Far from it. Indicative of a good showing the next three weeks? Iffy.

As for the two young guns of the four, Dillon has a top 5 and two top 10s, but all those stats came at Michigan; his Darlington and Richmond results are nothing to write home about. Elliott? Oh, a second-place finish in his first Michigan Cup start earlier this year, so there’s that.

In addition to Newman, five other drivers still with a shot at making the Chase have won at the remaining three tracks. They’re led by Greg Biffle, who’ll look to be Roush Fenway Racing’s entrant after a subpar few years. He has six wins among the speedways, four at Michigan and two at Darlington. He’s followed by Dale Earnhardt, Jr., who, of course, would need a waiver even if he did win and is not even confirmed to be returning before Richmond, sitting out the last few races and continuing to do so at Michigan and Darlington. In the event that he does return for Richmond, things just might work out in his favor; he has three wins at the short track.

Speaking of Richmond wins, Clint Bowyer knows a thing or two about them — OK, two specifically. He’s won there twice, the last coming in 2012 (and in significantly better equipment; his HScott Motorsports team probably won’t be making it into Victory Lane). Kasey Kahne has a Richmond victory too, along with a triumph at Michigan.

Finally, Regan Smith is on the outside looking in with regards to the top 30, entering Michigan in 32nd. He’d need a bit of a miracle to catapult him inside, and it’d probably have to come at Darlington, where he scored his lone Cup win.

Others to look out for: Trevor Bayne and Kyle Larson, drivers barely outside the cutoff, plus others with a lot less to lose by making brash, bold decisions on race day — think Ricky Stenhouse, Jr., Ryan Blaney, Paul Menard and the like.

Let’s look at who NEEDS to win to get in and see if there is any reality to it. The only person that strikes me with this opportunity in this position is Larson. Specifically at Richmond. He has shown speed there, won a pole or 2 at the track. Now, can they find and keep that speed for 400 laps is the ultimate question. Maybe Newman at Richmond too, but that’s a big maybe….. Same goes for Larson at D(C)arlington & Michigan. McMurray is also a decent pick for Richmond. Yet again though, he can try to points race his way in….

For this weekend, Austin has the best opportunity out of the no win club to break through. I just don’t see it happening though as he is truly points racing his way in right now. He won’t take the risk that a Larson needs to in order to get into the chase. I hear him n Larson are bringing their Pocono cars this weekend tuned up to try and win.

AND, I see Buescher points racing his way into round 2 of the championship, where most see him flaming out after 1 round. They don’t have the speed to win, we know it, FRM & Roush knows it. They will do their damndest to eek out 3 T-15 to 20 finishes, & hope for some of the chase guys to have 1 bad race. Voila, round 2.