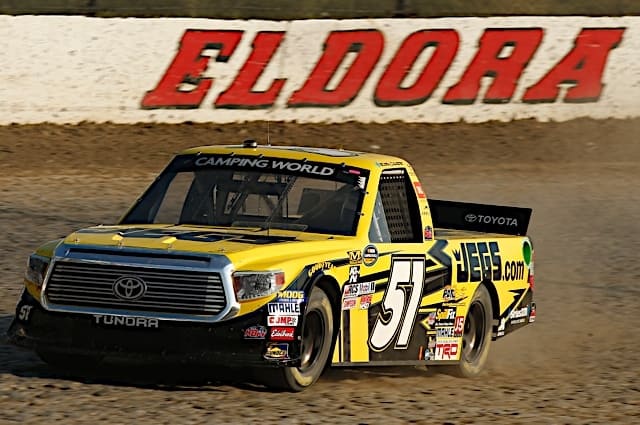 Kyle Busch Motorsports announced on Thursday that NASCAR Next driver Gary Klutt will pilot the No. 51 Toyota at Canadian Tire Motorsport Park next week in the Camping World Truck Series.

Klutt, 24, will be taking over for Cody Coughlin, who will be competing at Winchester Speedway in the ARCA CRA Super Series.

Coughlin has been a part of five Truck Series races in 2016 with a best finish of 12th at Texas in early June. He most recently ran the No. 51 truck at Pocono, coming home 13th.

Klutt will be making his debut in a top division of NASCAR. He has raced full-time in each of the last two seasons in the NASCAR Pinty’s Series, which is a NASCAR touring division in Canada.

So thankful for this opportunity from @KBMteam @JEGSPerformance
to get in the #51 Toyota Tundra @CTMPOfficial pic.twitter.com/gf5ZO691fX

Through nine races in 2016, Klutt has five top-10 finishes, with a best finish of sixth at Toronto. In his last outing, he led two circuits, the only laps he’s led on the season.

Running all 11 races last year, Klutt picked up his first top-5 finish of his career when he won the season-opening race at Canadian Tire Motorsport Park. The newly acquainted KBM driver led 12 laps, the only laps he led of 2015.

Gary is the son of Peter Klutt, owner of Legendary Motorcars, which shows on Velocity

It’s cool that Peter Klutt’s son of Legendary Motor Cars fame is going to compete in a higher level Nascar series. Just wish that it was with ANY other team than KB motor sports. I predict that Gary won’t be there long because he seems to be a genuinely nice kid and KB is a toxic punk.