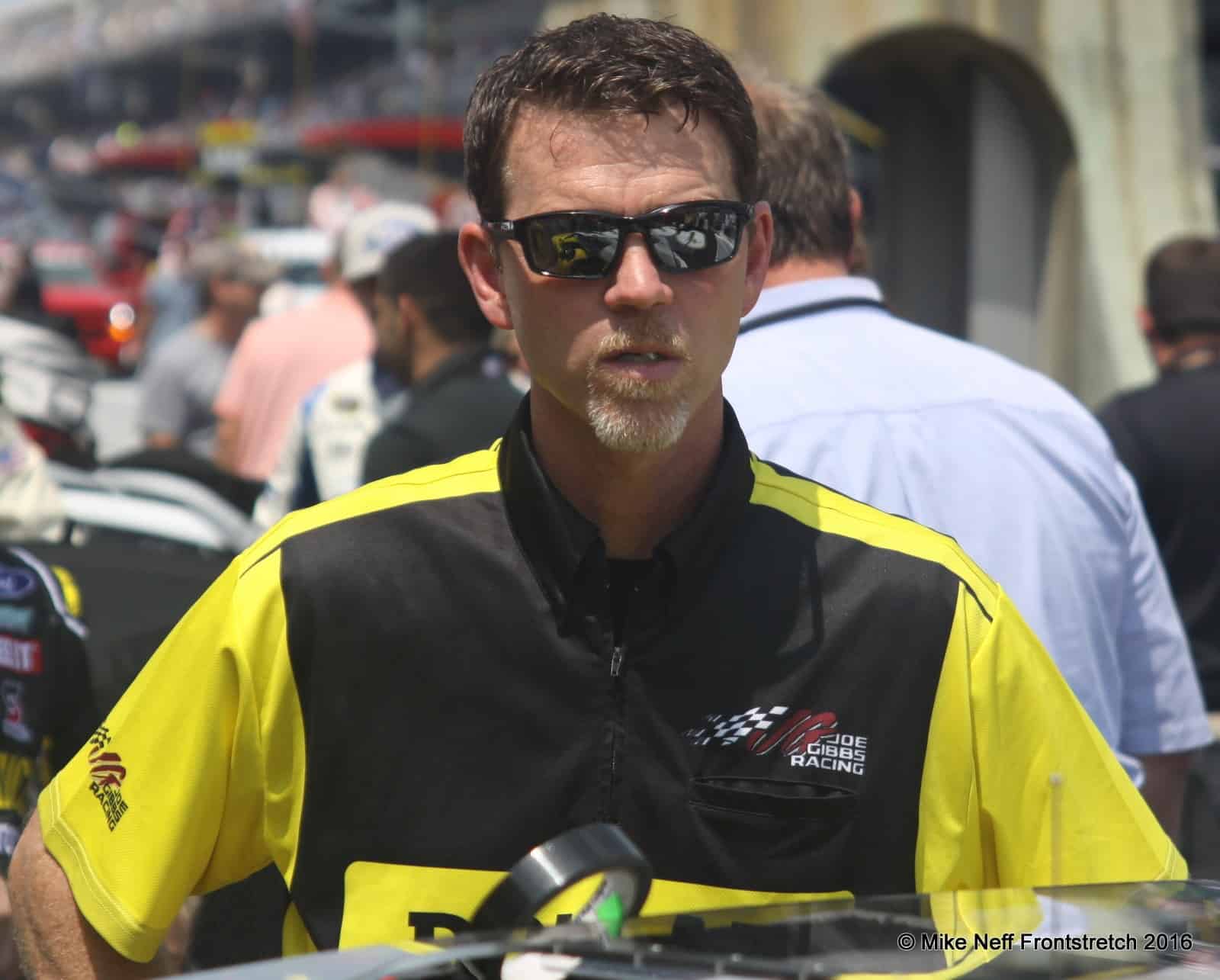 Heading into the Irish Hills of Michigan, teams will have a few more options. The wide racing surface at Michigan International Speedway always offers a vast number of racing options for drivers and teams. The track has even employed tire machines in an attempt to spread the groove even further up the track. The challenges presented this weekend are a little more vast thanks to the special aero package being implemented.

Jason Ratcliff will lead his No. 20 team, driven by Matt Kenseth, into Michigan after a less-than-acceptable run in the spring race. After winning from the pole last fall, the team came home 14th in the first race at the track this year with the low downforce package. Ratcliff feels the team made gains at Kentucky Speedway, where the same package was run. Heading back this time he knows the team will have to deal with the cars not gripping the racetrack and will have to work to find the proper balance. He also feels that tires will be the most important item this weekend. Fuel mileage may increase but teams most likely won’t get to take advantage of it because tires won’t last.

Mike Neff – Bristol was less than the success that you wanted, but you were competitive when the trouble fell you. How did you feel about the 24 hours of Bristol?

Jason Ratcliff – I thought we made gains on it all weekend. We had a good qualifying effort the first day and learned some things. Actually, when we got a few laps under our belt on Saturday it seemed like the car was going to be pretty good. We knew the track was green and expected it to be loose to start. It was everything we expected but, for whatever reason, on Sunday with the different conditions, the car was just too tight … much tighter than we expected. It took us a while to get it to respond.

Overall we were making some gains, and I felt like we were going to move back to the front until we got caught up in that wreck. It wasn’t the Bristol experience that we were expecting, but it is Bristol — you are either going to go there and run up front all day and have a shot to win, or unfortunately you get caught up in something. Very seldom do we go there and finish eighth or 12th (laughs). It is either the top two or three or it is a DNF, unfortunately.

Neff – Bristol put a rosin on the bottom of the bottom groove to try and make it more competitive with the top. Were you able to notice the difference with your car, and was there still some of it left after all of the rain and racing before the race got close to completion on Sunday?

Ratcliff – I think so. Even towards the end of the race, especially on restarts, guys were able to make some headway down there, which we haven’t seen in a long time at Bristol. Whatever they did it definitely made a difference. Was it everything they were hoping it would be? I don’t know, I’m not sure what the goal was (laughs). It definitely opened up two lanes and had some guys moving around. It created some more passing. It gave options. Whether it was catching a lapped car or chasing a guy down, at least you had another place to go and feel like you could be competitive. All in all I think it was a plus.

Neff – You go from a half-mile track to probably the fastest track on the circuit right now. How do you feel about a Michigan track that has started to age and gain a little character?

Ratcliff – The last two races there, we’ve thrown different aero packages at it, so it is hard to evaluate the difference in the track itself from what it was in 2013 and 2014. It is still Michigan. It is big, fast and can get widened out and create some good racing regardless of what aero package you have. We were able to go in there last year and have a good showing in the second race with the high-downforce package. We didn’t have as much success in the first race this year with low downforce, but I felt like we learned a lot at Kentucky with this same aero package. With that, I’m looking forward to going back to Michigan and trying it again.

Neff – NASCAR has implemented some improvements to the cars for plate tracks in 2017 and all tracks in 2018, phasing it in as people start presenting chassis to be certified. Have you worked with it at all outside of your Talladega Superspeedway car?

Ratcliff – No, we haven’t. Most of it, if not all of it, is new safety things. They are always learning there and evolving. It is unfortunate that you have any wrecks but when you do at least you can learn from them. Those are some things they are implementing at the speedways. Other than that we probably won’t do a lot with that until it is mandatory, for a number of reasons. Number one is it is some work; it isn’t going to be free. Number two, it is going to be heavier (laughs). Heavier race cars usually aren’t faster. I’m sure most teams will drag their feet on it until NASCAR makes them do it.

Neff – So the car will be heavier. That doesn’t mean the total car weight is heavier, but you will have less opportunity to place the weight where you want it. How significantly will it impact the center of gravity on your car?

Ratcliff – It will be big, but if it is the same for everyone then it is the same for everyone (laughs). A few years ago we did a weight reduction in this series and we got it to where teams could put some ballast in the car and adjust their weights. Now we’re adding weight, and I understand the reasons behind it, but if you start adding weight back it makes it difficult to do again. Taking weight off of a car is about 10 times as expensive as adding it. When you get to the point where you’re heavy, you’re probably not going to be heavy total. If you are, then you need to tear your car apart and start over. The right-side weight can be tough sometimes to get out of the car. We want to watch that. There are smart ways to do these things without bulking them up and adding a bunch of weight. It is going to be taking lead out of the frame rails and welding it into the door bars basically.

Neff – Does it involve additions to the firewall as well?

Ratcliff – It is. It’s around the foot compartment, the floorboard, replacing the door bars and a few other areas I am probably forgetting about. It is focused around the cockpit area.

Neff – Is the aero package this weekend going to be the low downforce, or is it the no-downforce package?

Ratcliff – If it was no downforce we’d be in big trouble (laughs). It is much lower than what we’ve been racing the majority of the year. To put a number on it would be tough for me to do off the top of my head. It seems like we are back and forth all of the time. It is significant; it is not a small amount. This is the direction they think they are going for 2017, so it doesn’t hurt to get some laps on it. Lets everybody know where they’re at, and it will reduce some winter testing if we can learn what to expect now. Also, they’re going to a zero skew or straight-up housing as well, which changes things significantly. It will be the third race on it now, once at Michigan and once at Kentucky. I think at this point, everyone should have a pretty good feel for what they need. We’ll just go out there and see how competitive it is.

Neff – Some people might think that with lower downforce and the cars slipping and sliding and spinning the tires you’d get worse fuel mileage than with more downforce. In reality don’t you get better fuel mileage because you are out of the throttle longer?

Ratcliff – Yes, you do, and it has less drag on it so there are a number of things that help the fuel mileage. Typically fuel mileage always comes into play, but when you reduce downforce more times than not you’re going to want tires before you want fuel. If there is a fuel mileage increase that’s good, but I don’t think you’ll be able to take advantage of it.

Neff – We have seen some interesting strategies at places like Pocono and Indianapolis where people would pit immediately when a green flag flew, from the back of the pack and get back out on the lead lap. Is Michigan still too fast, even though it is 2 miles, that if you pit on a green flag lap you’re going to go a lap down?

Ratcliff – Pretty much; it is pretty tight, unless you’re the leader. If you’re any distance back from the leader, odds are you’re going to go a lap down if you pit. It depends on how long you’re on pit road. If you just need a couple of gallons of fuel than maybe you can make it off and get a little bit of a gap on the leader. If you are going to put tires on, especially four tires and have to fill it up, you will find yourself a lap down or very close to it.

Neff – Have you done anything with preparing cars for the Chase yet, or are you still a little too far away?

Ratcliff – The cars we are going to be racing at Chicago are really no different than what we’re going to run at Darlington next week. Each team will probably get a few new cars heading into the Chase. The way the schedule falls you’re going to end up having to race a couple of old ones too. All of them are pretty fresh. The days of running a car a dozen times are few and far between. Not that you don’t. Occasionally we’ll find one that we’re really happy with and we’d run it 25 times if we thought we could do it. We just keep cars updated and even chassis that we may run three or four races on we’ll still strip them down and put new bodies on them and just make sure they are fresh.