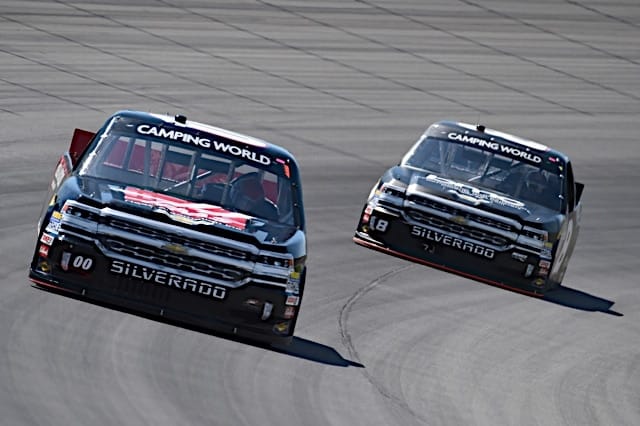 Cole Custer‘s late gamble for a win and a Chase berth fell apart in a big way after a heavy crash late in Saturday’s Careers for Veterans 200 at Michigan International Speedway.

Shortly after leading the field to green on a lap-85 restart, Custer was being pushed by eventual winner Brett Moffitt when Moffitt – seeing that the inside line of Timothy Peters and William Byron was prevailing for the lead – jumped outside of Custer for third. The two drivers were sailing through turns 1 and 2 when Custer lost control of his No. 00, sliding to the left before overcorrecting right and spinning head-on into the outside wall.
“(Moffitt) stopped pushing me — which it’s his right to do that, we were kind of losing (Peters) there — but he went to the outside and I started getting tight,” Custer said. “Once he got to the door I got loose and overcorrected it. ”

Heavily damaged, Custer’s truck caught ablaze as it slid to a stop on the backstretch, prompting the Californian to quickly evacuate his machine, a welcome sign for fans that feared the worst after his vicious hit.

“I’ve never taken that big of a hit before,” Custer said. “I can’t thank everyone enough safety-wise. I wasn’t hurt at all.”

After running outside of the top 10 for much of the race, Custer made his way to the front of the field with a fuel-mileage gamble, staying out during a series of late stops under on lap 64 and attempting to stretch his fuel for 54 laps around the two-mile oval.

The move appeared to be a good one going into the race’s late stages. After a slew of cautions, Custer had enough fuel to make it to the finish, and his truck was able to keep pace with the leaders down the stretch. Unfortunately for Custer, the good run simply wasn’t meant to be.

“I just hate it for my guys” Custer said. “They brought a great truck, and we’re probably going to throw that one away.”

Still, while Custer sits a full 50 points off of the Chase bubble and will likely need a win in the next two races to make the playoff, the JR Motorsports driver was able to take positives from his performance in the Irish Hills.

“I was happy that we were able to run up front this weekend,” Custer said. “Our mile-and-a-half stuff’s been getting better, so we’re definitely going in the right direction.”