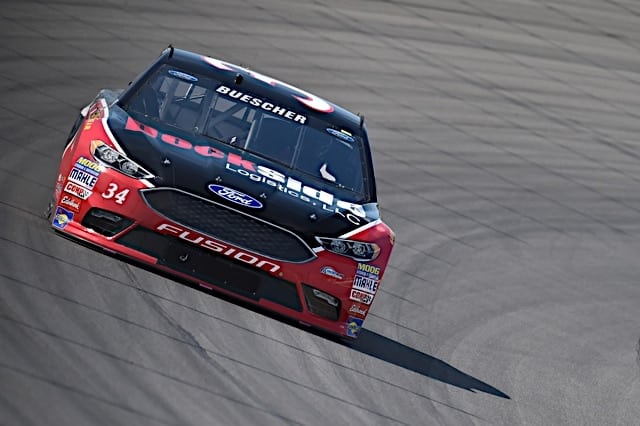 Chris Buescher‘s path to the Chase got a little closer and dramatic after a 35th-place run at Michigan International Raceway.

However, as hard as it is to believe, it could’ve been worse.

Buescher was riding around during the opening stint of Sunday’s Pure Michigan 400 when he began to slow, reporting that his engine sounded “flat”. The Texan limped his No. 34 Ford around the two-mile oval until a lap-20 competition caution, then brought the machine to pit road to repair what his Front Row Motorsports crew believed was a broken plug wire.

In the end, attempts to fix Buescher’s machine left the rookie multiple laps down, and when the repairs proved unsuccessful, Buescher was left making the most of a slow car. Buescher ultimately passed three cars on-track, while also benefitting from issues for teammate Landon Cassill and Clint Bowyer that left both drivers behind the wall.

“The guys worked really hard on our Dockside Logistics Ford to get it back out there,” Buescher said. “I know it isn’t fun opening a hood of a race car that is as hot at it is and trying to work on it. Kudos to my guys for keeping their heads down and working at it and getting it fixed. Usually when you have engine trouble you are along for the ride. It ended up being something a little bit more simple than I guess we originally figured. We got back up and running and made some laps and made a really terrible day into just an okay day.”

With the effort, Buescher maintains a seven-point advantage over 31st-place Regan Smith, who ended Sunday’s race in 29th.

Despite the tight gap in points, Buescher remains optimistic about his chances over the final two races and says his team will stay aggressive.

“We’re still aggressive,” Buescher said. “We’re not coming to the race track just to points race at this point. We know we’ve got to get out there and make these up.”

Buescher will look to hold onto 30th for the final two weeks in his first-career start at Darlington Raceway and at Richmond International Raceway, where he finished 34th in the spring.

“Darlington we’re going to go get all we can get and have some fun. I think we should be pretty good there,” Buescher told Frontstretch. “And honestly, I’m excited to be heading to Richmond. We’ve been talking a lot over the past couple weeks about different things we can try there. The groove widened up and we were able to move top side there last time. Landon ran pretty decent there, Stenhouse ran really good on the top there last time. We have some good notes and some ideas to try to make that a better race for us the last time around.”