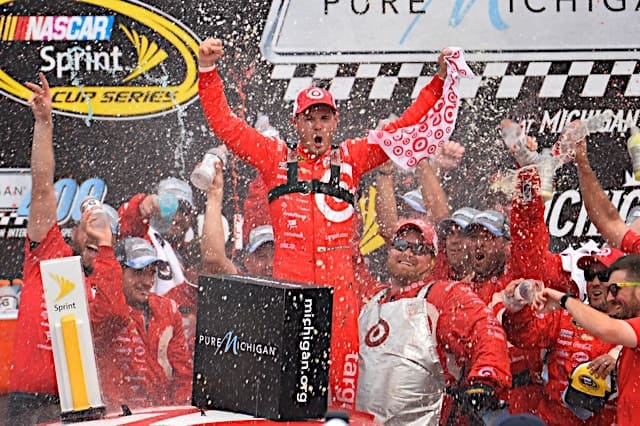 After nearly three full seasons of close calls and deflected questions about when his first win would come, Kyle Larson finally found a winning move in the NASCAR Sprint Cup Series on a late-race restart in the Irish Hills.

Larson powered his way around rookie Chase Elliott with a push from Brad Keselowski on a lap 191 restart and kept the field at bay for the final laps to cap off a strong performance at Michigan International Speedway with his first-career NSCS win in Sunday’s Pure Michigan 400.

The victory comes in Larson’s 99th start, and ends a winless streak for Chip Ganassi Racing that dates back to Jamie McMurray’s victory at Talladega Superspeedway in 2013.

Afterward, the Californian dedicated the win to his late friend, Bryan Clauson.

“I was teared-up that whole last few laps because I could just feel it. It was finally going to be it,” Larson said. “This one is for the Clauson family. We really miss Bryan. We love you guys. We’re going to miss him. We parked it for him, so that’s really cool.”

Larson led a race-high 41 laps in the win, but needed a pass on the race’s final restart to beat Elliott after losing the lead to the rookie on the final round of pit stops. Leading the field to green, Elliott struggled to find speed as his No. 24 Chevrolet got loose, allowing both Larson and Keselowski to pass him on the outside.

Elliott was able to get back around Keselowski, but ultimately crossed the line in second after failing to catch Larson.

Michigan native Keselowski crossed the line in third on the same weekend where he got to run a 1901 Ford around the two-mile Brooklyn, Michigan track.

“It was a typical crazy restart at Michigan here at the end,” Keselowski said. “It is about getting a good launch and push. It looked like Kyle got a good launch and maybe something happened to the 24. I was able to give him a push, a really hard push, and got sideways there and was able to get the lead. The 42 just drove away.”

Coming off of a June race that saw a record nine cautions at Michigan, Sunday’s race was dominated by long green-flag runs. The caution flew only four times in the race’s 200 laps, with one of the yellows coming in the form of a competition caution to check tire wear on lap 20.

With his win, Larson becomes the 13th driver to win on the season, and with it stamps his name into the 2016 Chase field. Currently three Chase positions on points, with Chris Buescher in by just five points after suffering engine woes and finishing 35th.

The Sprint Cup Series will return to action on Sept. 4, when the field heads to Darlington Raceway for the Bojangles’ Southern 500.

Another “competition” caution where most teams changed only 2 tires. I was waiting for a second competition caution to check the tire wear on the left sides. That’s the purpose of it, right?
I guess the 2017 package is more of the same-hope for a caution in the last 10 or 15 laps to set up a late-race restart and make you think it was a good show because an over-hyped guy finally won a race.