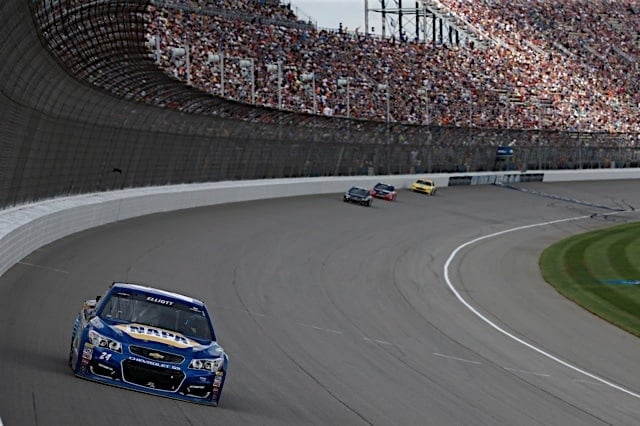 If it weren’t for restarts, Chase Elliott would likely be a two-time winner at Michigan International Speedway. Instead, the rookie phenom found himself shrugging off another close loss, this time to Kyle Larson, in Sunday’s Pure Michigan 400.

Elliott was leading late in the 200-lap event when a lap-188 caution for debris allowed the field to close up to his No. 24 Chevrolet. Elliott led the field back to green on lap 191, but quickly fell back to third after a poor restart when machine got loose going into turn 1, allowing both Larson and Brad Keselowski to pass the Hendrick Motorsports driver. Elliott was able to work his way around Keselowski, but fell short of the race win, taking the checkered flag 1.478 seconds behind Larson in second.

“Bummer again here,” Elliott said. “I hate to let my guys down is the biggest thing.  For the second time this has happened.  I made a mistake early on in the race.  I asked my guys to bail me out, and they did.  Unfortunately, I didn’t do my part again.

“That’s a couple races in a row in just a few short months here at this place we had a really good car, had an opportunity.  That’s one thing I try really hard to do is make the most of opportunities when they’re presented.  Obviously I didn’t do a very good job of that here both trips.”

Elliott was leading late in June’s FireKeepers Casino 400 when he surrendered the lead to Joey Logano on a late-race restart. After suffering the same fate in his Michigan return, the rookie acknowledged that his restarts need to improve.

“Need to do my restarts a little better,” Elliott said. “That’s obviously not a strong point, at least here at Michigan.  Think about that some and I guess take the positives.  We were strong I felt like as a company today, which was encouraging.  Look at that, try to get to Darlington.”

Unfortunately for Elliott, the only way to practice is to be in position during races.

“You can go practice it if you want to rent a racetrack, sit there and restart all day long, if you wanted to, I guess,” Elliott said. “But know you’re not going to recreate those scenarios, what the people around you are thinking like when one of these Cup races are on the line.  That’s just a part of life, man.  You do have to put yourself in those situations more often to see how you’re going to handle them and how you can fix them moving forward.”

Elliott will get another chance to earn his first victory on Sept. 4, when the Sprint Cup Series field heads to Darlington Raceway for the Bojangles’ Southern 500. Elliott has one XFINITY Series victory at the track from 2014, and competed in the race as part of a limited schedule in 2015.

The rookie will also attempt to clinch his way into the Chase. Elliott currently sits on the preliminary Chase grid at 11th in the standings with two races remaining, 27 points ahead of Ryan Newman, who is the first driver outside of the grid.

As usual, no love for the rookie in P4 – #21 Wood Brothers, Motorcraft/Quick Lane Racing Ford of Ryan Blaney’s awesome Run! Chase – Rock Star! Ryan – also ran? Perhaps it will get picked up by mid-week, again, as usual. Us Fordies are quite accustom to media snubs & would not know what to do with out it! Thanks anyway.
Chase needs to learn two things. First is winning at the Cup level. Two is NOT to spout off in media negatively about himself. Fine to console the team in person & somewhat refreshing to hear such candid feedback. But doing it in mass media is not good for anyone. Needs to quit it! His competitors will learn to use it against him, if they haven’t already.

You are correct…they will and do use it against you. Shortly the old hypocritical, sneaky hags will start using it too in the way of doing something to him and then BLAMING HIM! It has happened before and will happen again~~~~~~~~~~~~~~~

He is also teetering in that gray area of saying sorry so much that he will start taking blame for others and the idiots will be all to happy to agree with him.