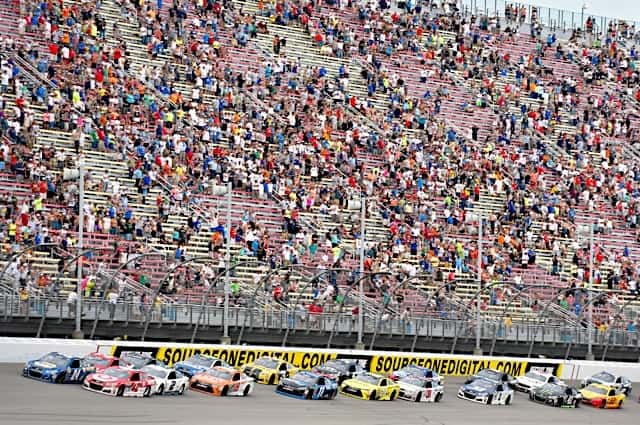 Kyle Larson was in the spotlight for his win, but he wasn’t the only driver for Chip Ganassi Racing to take home a top 10 on Sunday as teammate Jamie McMurray came home eighth in his No. 1 Chevy.  CGR has struggled over the last couple of seasons, switching engine programs and making sweeping personnel changes in order to find the right combination to take them back to the elite status they enjoyed a decade and a half ago.  It’s a bit early to say they’ve hit on it, but this week was a step in the right direction for a team that’s never quite been among the top tier in the sport.

Michigan was the third and final test of the rules package that NASCAR is likely to adopt for 2017.  Things were definitely racy in the pack, while clean air was still king up front…as it’s likely to be at a freshly-paved 2-mile oval with any package, so it was hard to see how much difference the changes made as the racing in the pack wasn’t broadcast to the viewers at home.  Same old same old.

Hidden under the same old same old talk about the racing, though, are a couple of things to keep an eye on as the Chase nears.  One is that the new package, unlike the current one, doesn’t seem to favor the Toyotas.  The three races with the changes were won by two Fords and a Chevrolet.

Also of note was that while the Joe Gibbs Racing cars have been fast as always, the team wasn’t in a class by itself at Bristol and certainly not at Michigan, where JGR cars combined to lead just nine laps, with seven more for satellite Furniture Row Racing. Team Penske drivers led 38 laps; Hendrick Motorsports, who has been largely and conspicuously absent from the conversation for much of the year, led 68; and winner Kyle Larson led a race-high 41 on his own.  Have the other teams caught the JGR juggernaut at exactly the wrong time?

On a different note, NASCAR’s three national touring series all saw a driver take the checkers for the first time this weekend.  In a sport that sometimes gets labeled as predictable, the weekend showed that nothing is a foregone conclusion all the time (Kyle Busch wasn’t in the XFINITY race, so…) and that there is a lot of talent in the ranks. The sport is in good hands for the foreseeable future.

Joey Logano certainly has plenty of speed this year, but it’s fair to say he’s not having the season he had in 2015. Winning the pole for this weekend’s race was a nice sidebar for Logano, but the driver wasn’t able to close the deal on Sunday.  He led twice for a total of 24 laps and snagged a top 10, finishing tenth, but if Logano is going to make noise in the Chase, he might need to start warming up his voice.
Matt Kenseth was certainly on the list of favorites to win Sunday—his Joe Gibbs Racing team has dominated this season and Kenseth is always strong on the 1.5 and 2-mile tracks, but this weekend, mechanical gremlins got between him and a trophy run.  Kenseth led eight laps, but later in the run reported to his team that something felt “messed up” on his car, and he never contended afterward, finishing 13th after gaining a spot on the final restart.

It certainly wasn’t a race of attrition.  Michigan doesn’t tend to get messy like Bristol or Darlington.  But it was a race where small things and little mistakes took a toll, and on Chase teams who should know better—and who can’t afford to make them three weeks from now.  A bad spark plug almost cost Chris Buescher a Chase berth (and it still could as he has just a 7-point lead over 30th place, though he does have teammate Landon Cassill in prime position to cushion the blow.) This week saw yet another pit road mishap for Martin Truex, Jr., as his car fell off the jack during an early stop, causing a long stop from which the team never recovered. Jimmie Johnson, who hasn’t made much noise this summer, looked like he had a winning car, but a fueling problem on pit road and a later loose wheel cost him a chance at the win.  Maybe it’s a good thing that they’re getting these things over with before the Chase…but maybe it’s a matter of weaknesses being exposed.

Why… did Kyle Larson win the race?

Raise your hand if you didn’t think Larson was going to get to Victory Lane eventually?  Yeah, me either.  The surprise here is that Larson didn’t get there sooner; he’s come close enough times that the win would have been almost anticlimactic had the emotions surrounding it not been so overt and genuine. Larson got the victory thanks to a late flat tire for Michael Annett in the No. 46, which allowed him one more shot at a dominant Chase Elliott. On the restart, with both drivers on worn tires, Larson was able to get a better jump than Elliott, who spun his tires while Brad Keselowski pushed Larson to the lead.  Larson took off in the clean air out front and ran with it all the way to the checkers.

A few weeks ago, after Denny Hamlin caused significant body damage to his Toyota after celebrating a win, NASCAR warned drivers that there could be penalties for torn-up bodies if the cars could not pass postrace inspection or hindered the process. Larson pulled into Victory Lane with battered rear quarter panels after doing some impressive burnouts, and if NASCAR wants their words to have bite, they need to penalize Larson.  There’s no reason to believe that Larson’s celebration was meant to cover something up (there are other teams where that’s a possibility but unlikely this time), but NASCAR can’t stand by after issuing the warning. And in this case it’s a good idea—if the car can’t be fully inspected, there’s no way to know if the win was legit or tainted by shades of grey.

Who cares if they penalize Larson, they won’t take away the win and in his case points won’t matter. Penalties have become a meaningless joke with this championship system once a driver wins.