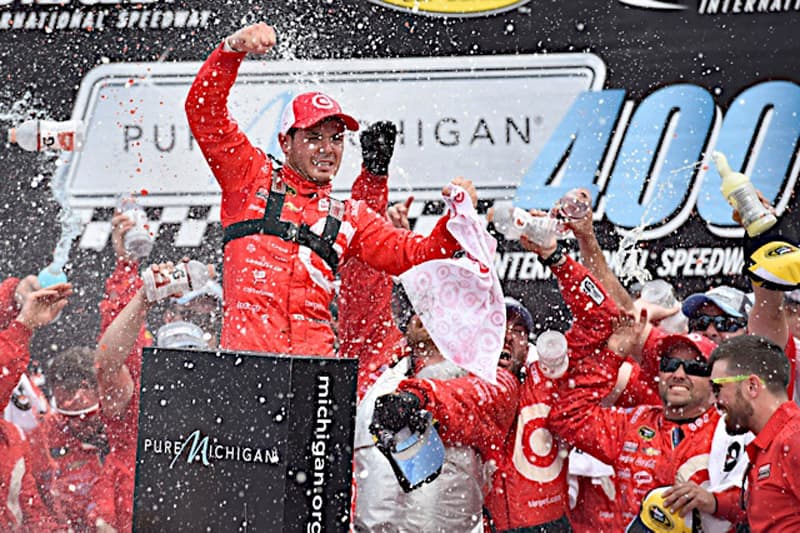 Who’s in the headline – Shouldering the label of best not to do something can be a heavy burden. For 98 Cup races, Kyle Larson took the green flag but was not the first one to see the checkered. After eight top 5s and 17 top 10s as a rookie, it seemed inevitable that Larson would visit Victory Lane, most likely many times.

2015, however saw a sophomore slump that knocked Larson back and led to a new crew chief, Chad Johnston. This season has looked like it was trending in the right direction; however, every win Larson came in contention for seemed to be accompanied by bad luck. Well, Sunday saw that monkey come off the young phenom’s back for good. The only question now is whether this victory will open the floodgates.

BEDGOOD: The Emotion Of Larson’s Cup Victory Runneth Over

What happened – Joey Logano started on the pole and led up until the competition caution. On the ensuing restart, Kevin Harvick grabbed the top spot and led for 32 laps. Martin Truex Jr. then took a turn at the point before pit stops mixed up the order a bit. Jimmie Johnson then emerged up front, leading 37 laps beginning on lap 71.

Another round of stops culminated in a caution period, one where Larson exerted control on a lap 125 restart. He led for 31 laps until the final shuffle of pit stops. Quick work on pit road put Chase Elliott at the point for 22 laps, starting on lap 169 up until the final restart of the race. That’s when Larson grabbed the lead for the second and final time on lap 191 and held it for the final nine circuits to claim his maiden victory in the Cup Series.

Four caution flags flew for 17 total laps in what was a typical clean race by Michigan standards.

Why you should care – The win by Larson puts a tighter vice on the drivers battling on the dreaded Chase bubble. Ryan Newman was in the final spot coming into the race but, thanks to Larson’s win, he’s now on the outside looking in. Elliott, Austin Dillon and Jamie McMurray are the three drivers in on points at this time but there are two races left until the cutoff, enough time for any of the trio to fall out or even a 14th surprise winner to emerge.

Elliott is 27 points ahead of Newman at this juncture, which means if he can finish 19 positions ahead of whoever is 17th in the Chase standings after Darlington he’ll be “locked in.” Others could also clinch depending on circumstances in the Southern 500.

Also, keep in mind Chris Buescher could also factor into this mix; he had a difficult day at Michigan and came home 35th, seven laps in arrears. The finish puts him just seven points to the good ahead of 30th position with two races left to maintain any kind of gap and make the Chase.

What your friends are talking about – Nashville Superspeedway’s days are numbered. It was announced this week that the facility is being sold by Dover Motorsports to Panatonni Development Company, an organization which specializes in build-to-suit, industrial and office properties. Need I say more?

The concrete track, which last hosted a NASCAR touring series event in 2011 was reportedly sold for $27.5 million. The deal includes assumption of debt for the Infrastructure Revenue Bonds that were issued for Dover Motorsports, the independent company who now holds just one NASCAR-sanctioned track (Dover Downs).

NASCAR continues to work at expanding the fan base and its latest effort is a new app designed to attract kids. As part of the Kids Drive NASCAR campaign they launched the NASCAR Acceleration application. It is designed to provide racing games, fun ways to learn about the sport and activities. The app will feature young drivers sharing their experiences outside of the track, social media takeovers and family experiences with their children. If the effort is a success, it will bring a whole new generation of fans into the stands. The initiative also offers a new opportunity for kids 12 and under. They will be afforded free admission to all Truck and XFINITY races.

Social media was abuzz this week after Colin Kapernick sat during the national anthem of a preseason football game as a protest. NASCAR is one of the most patriotic sports in the world and fans take loyalty to their country seriously. Several years ago, Kurt Busch was skewered for wearing his hat during the anthem when he was running late to the grid and didn’t realize he had not removed it. Kapernick used his position in the sport to make a statement, and while the avenue may have been questionable, he undoubtedly continued the discussion about race relations in the U.S.

Who is mad – Feel free to skip to the next paragraph if you think you’ve heard this story before. Clint Bowyer’s season in waiting continues to be about waiting to get out of the No. 15. The team started 27th and clawed their way up to 21st. They battled from a lap down to a point where, at one point they rose to fourth before a driveline issue that turned out to be a broken transmission. The team replaced it and returned to the track to receive a running at the finish credit; however, it was a last-place result for the 5-Hour Energy ride that continues to limp through 2016.

Truex Jr. was able to make a pass for the lead on the racetrack, flexing the muscle of his No. 78 Toyota. But by the end of Sunday’s race, that was about the extent of the excitement for the Furniture Row Racing driver. During a pit stop on lap 64, the No. 78 team had a jack issue and the car dropped before the left rear tire was in place. As a result, they ended up one lap down and spent the remainder of the day battling damage and lost track position. It ended with a 20th-place finish and a feeling of what might have been.

Buescher had a big day at Bristol and jumped up inside the top 30, looking good a spot in the Chase. Unfortunately, he started the race at Michigan and immediately experienced an engine issue. The team diagnosed a broken spark plug and brought the car to the pits during the competition caution. They changed plugs and eventually, the motor came to life but it was too little too late and he finished the race seven laps down in 35th. Buescher is still seven points ahead of 30th position but it is far from a comfortable feeling with two races left until the Chase field is set.

Who is happy – You’d think a driver who was beaten on the final two restarts of the race and came home second might fit into the Who’s Mad section. If you saw Elliott’s post-race interview, he also might have been categorized as mad but, when he steps back and looks the Cup Series rookie ought to feel pretty good. Elliott led the race the most times and was 10 laps shy of leading the most laps. He also had not had a finish better than 13th in Cup since the last race at Michigan. Next up is Darlington, a track where he won his second career XFINITY race. Clearly, Sunday was a crucial turnaround for a season that had threatened to go sour.

Ryan Blaney has 42 career starts in the Cup series and a total of three top-5 finishes. His fourth on Sunday matches his career best which was at Talladega last season during a partial schedule. Blaney is trying to give Elliott a battle for the Rookie of the Year. While missing the Chase is likely, if Blaney can put together some runs like this over the final 12 races of the year the ROY race could be interesting.

An eighth-place finish might not be that spectacular but, when you are in a tight battle to make the playoffs, it can be the difference in walking out on the stage in Richmond or going home feeling empty. Jamie McMurray came home in that position Sunday while Ryan Newman crossed the finish line in 17th. Add it up and McMurray is 15 points ahead of Newman for the last spot in the Chase. He is also six points behind Austin Dillon for the next spot up the ladder. While McMurray most likely isn’t sleeping soundly, he’s sleeping a little more comfortably than he was before heading to Michigan.

After 24 races Keselowski, Kyle Busch, Carl Edwards, Johnson, Matt Kenseth, Hamlin, Harvick, Kurt Busch, Joey Logano, Truex Jr., Tony Stewart and Larson are all locked into the Chase assuming they attempt the remaining races thanks to wins and the fact that there cannot be more than 16 unique winners by the end of the race in Richmond. Buescher, thanks to his win at Pocono, will make the Chase if he can maintain a spot inside the top 30.

The remaining Chase drivers at this point and their point position:

What is in the cooler – A first-time win is always an exciting moment to see but the low downforce package at Michigan still didn’t bring the excitement that engineers hoped it would to the track. Two on-track passes for the lead and still no viable slingshot maneuvers feels like they still have a ways to go. Seeing cars four and five-wide back in the pack added some excitement but that didn’t happen often on Sunday. As a result, Michigan gets two lukewarm Glory Days IPAs from Tecumseh Brewing Company.

Where do you point your DVR for next week – Break out the leisure suits, tie dye and bell bottoms, it is throwback weekend at Darlington Raceway. The traditional Labor Day Southern 500 hits the egg-shaped oval at 6:00 PM on Sunday, September 4th. The action can be seen on NBC and streamed on NBCSports LiveExtra. You can also hear the action on your local MRN affiliate or SiriusXM NASCAR Channel 90.

Besides all the throwback paint schemes at Darlington, they should have throwback rules. No free passes or wave arounds. Old restart rules-lapped cars on the inside lane, lead lap cars outside. No overtime. If it ends under caution, so be it.

I love that idea but it could never happen. They could also award points based on the old Latford system. That would be a real wildcard for the chase points cutoff. It would be stupid, but since they love hokey, crapshoot gimmicks, it would be perfect.

Glad to see Larson finally seal the deal and win (I was tired of hearing/reading the “when will he finally win one” interviews/stories. While I’m not a fan of any driver, as the race wound down I just wanted to see a 1st time winner and would have been fine with Larson, Elliott or Blaney taking the win.

Karma has a funny way of working Clint.