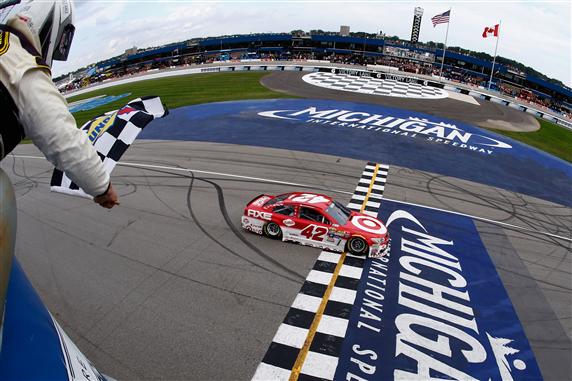 If you follow NASCAR, you knew that the potential to see a first-time winner last weekend at Michigan International Speedway was pretty high. Drivers like Ryan Blaney, Chase Elliott, Ricky Stenhouse, Jr., and Austin Dillon had all been running well, leading laps, and finishing in the top five. While Chris Buescher had already earned his first career victory earlier this season at Pocono Raceway, you still had to expect at least one of those drivers to make it to Victory Lane too.

Kyle Larson was on that list as well, and finally made it happen in Michigan, leading 41 of the 200 laps and earning his first career NASCAR Sprint Cup Series victory. Interestingly enough, Blaney and Elliott were two of the drivers he had to beat on the final restart to make it happen.

Larson’s victory wrapped up a weekend that saw a first-time winner in all three of NASCAR’s national series, with Brett Moffitt winning the Truck Series race in Michigan and Michael McDowell winning the XFINITY Series race in Road America.

This is Larson’s third full-time season in the Sprint Cup Series, winning in this 99th career series start. Though the 24-year-old driver has two victories in the Camping World Truck Series and four in the XFINITY Series, he found it more difficult to achieve the same result in the Sprint Cup Series. Still, the No. 42 team had shown the performance needed and the ability to make it to Victory Lane, but hadn’t quite been able to seal the deal. Though Chip Ganassi Racing is far from the strongest team in the garage area, it wasexpected that Larson would eventually make it to Victory Lane.

Larson had led 140 total laps in the races before Michigan, finished in the top five four times, and the top 10 seven times. In 2015, he

earned 10 top-10 finishes and led 115 laps. In his rookie season, he had eight top-fives, 17 top 10s, and led 53 laps. Looking at those numbers, it certainly is a surprise it took this long for him to win, certainly a fact that wasn’t lost on the California native.

“This feels different because it’s taken me a lot longer than it took me in any of the other stuff to get a win,” said Larson post-race. “Took me a couple months to win my first Sprint car race, four days after my 15th birthday. Took me a few months to win when I got into USAC. Took me a few years to win an Outlaw race. This, after the way my rookie season started, coming close a few times, not getting it done, you can visualize the win that early in your career. It’s going to happen. It’s going to happen. But it just never happened. This one’s different just ’cause of how long we had to wait and how much harder I’ve had to work for it.  Like I said, it’s special because all the hard work’s paid off.”

Despite the fact that Larson has been able to run up front for quite a while now, this will be the first time that Larson will be able to compete for a championship as the win earns him a Chase berth. A difficult last few weeks and an unexpected win from Buescher had put that spot in jeopardy, but now there is no longer any question.

However, this win wasn’t just a big deal for Larson. The victory was also huge for CGR, breaking a 99-race winless streak for the team as well.

“I remember when I got into this business, James Finch told me it took a hundred races before these guys could figure it out,” said team owner Chip Ganassi. “Thank God we beat the triple digit by one.”

The last race win for CGR came with Jamie McMurray, Larson’s teammate, in October of 2013 at Talladega Superspeedway. After Larson’s win, McMurray now sits only 15 points ahead of the Chase cutoff line with just two races left before the start of the Chase in Richmond. Larson is the 13th different winner this season.

The first career victory is always an emotional one no matter the circumstances, but for Larson this win carried additional meaning above and beyond his season and career implications. On August 7, 2016, sprint car driver Bryan Clauson lost his life due to injuries sustained in a crash at Belleville High Banks in Belleville, Kansas. Larson, an accomplished dirt track driver himself, was close friends with Clauson. Stenhouse and Larson ran commemorative helmets for Clauson in Bristol Motor Speedway a couple of weeks ago, and Larson paid tribute to Clauson after his victory on Sunday.

“Watkins Glen, knowing that morning we didn’t get any good news, that was really tough getting in the car there,” said Larson. “Bryan was going to race 200 times this year. He would want us to race. This is our job.  We love doing it.  He loved doing it.  It’s not hard to get in a racecar. Especially we’re extremely sad, and still are sad, but after hanging out with the Clauson family, his fiancée Lauren at Knoxville, to see how strong they were being, really helps all of us. All of their close friends and stuff.

“Yeah, you hate it, you hate to see anybody go in racing, but especially somebody like Bryan that touched so many people, done a lot for a lot of people, charities and stuff like that,” continued Larson. “It’s good to be able to park it in Victory Lane, like he would have said. He didn’t like people doing burnouts and stuff like that, ’cause he wanted you to act like you’ve been to Victory Lane before. But I hadn’t been to Victory Lane before so I was going to do some burnouts.”

He doesn’t think it will be the last time this season that he will have the opportunity to do burnouts. Now that the team can solidly look ahead to the postseason, Larson thinks he will have multiple opportunities to win again and potentially make a run at the championship.

“Yeah, probably half the tracks are some of my best racetracks,” Larson explained. “Starting out in Chicago, that’s a great one for me. Loudon we’ve struggled a little bit. Dover, that’s a good one. We almost won there earlier in the year. Texas, Charlotte, Kansas, then Homestead is awesome for me.  Martinsville has typically been a bad track for me, but we ran third there this year. Hopefully we can go back and have another good run.”

Larson recalled the last couple of years, reminding everyone that his statistics back up that confidence.

“Yeah, there’s a lot of good tracks,” Larson continued. “My rookie year, I didn’t make the Chase obviously. Do the math. I made like the third or fourth most points in the Chase. Had I been in the Chase, I think I would have finished like sixth in points or something. Yeah, there’s a lot of good tracks coming for me. Talladega is a wild card. We could have a good run there or bad run, whatever. But we’ve been pretty decent on superspeedways this year, gotten our cars better.  I feel we definitely have a shot to make it to the final eight.  If we make it to Homestead, I’d be super excited because we can run in the top there pretty good.”