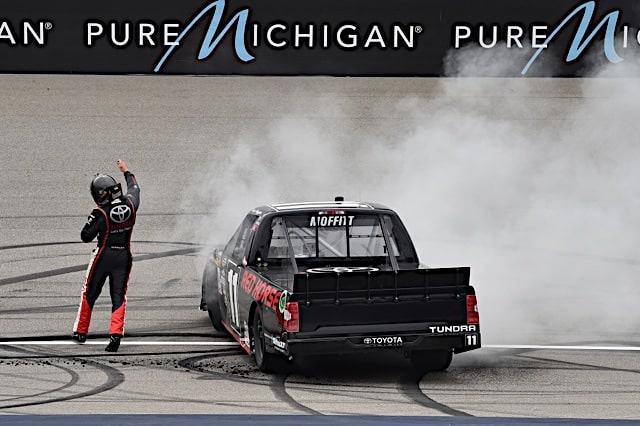 Sprint Cup Series: Youth Makes A Comeback – Much of the NASCAR season has been focused on when there will be a “changing of the guard.” 45-year-old Tony Stewart is retiring, 45-year-old Jeff Gordon has already done so but is filling in for fellow 40-something Dale Earnhardt, Jr. during his concussion recovery. That trio accounts for millions of dedicated NASCAR fans, all of whom have been asking the same basic question: “Who do I follow next?”

For months, youngsters like Chase Elliott, Ryan Blaney, Austin Dillon, and Kyle Larson have been positioning themselves to take their place in Victory Lane only to fall short. That changed Sunday, a Michigan youth movement culminating in Larson outdueling Elliott, the first of what will be many 1-2 battles up front between the two in the Sprint Cup ranks. In his third season on tour, Larson took control of the race following a frenetic final restart and finally cashed in after a career riddled with second-place finishes and “almosts.”

“I couldn’t quite catch my breath there after I got out of the car because I spent two minutes screaming because I was so pumped up,” said Larson, who had four second-place finishes in his first 98 career Cup starts. “It was pretty special and I’ll remember it forever.”

For Elliott, another runner-up finish wasn’t all bad as it kept him 27 points to the good in a shrinking Chase bubble. Suddenly, of the four young drivers listed above three are in strong position to make their first ever postseason appearance. The “young guns” expected to transition to the top may still get their chance at a bigger stage before Homestead closes out the season in November. – Staff

XFINITY: Sieg Still in the Chase Hunt – By finishing 14th at Road America, Ryan Sieg remains on the XFINITY Series Chase bubble with three races to go.  It is a tough spot to be in for Sieg’s small organization, but the No. 39 team was able to salvage a decent finish out of a day that could have gone much worse.

After starting from the back of the field, Sieg came to pit road on lap 12 just before the second caution came out to address an overheating issue.  The problem could have put Sieg’s Chase chances in serious jeopardy.  However, the team rebounded and, perhaps more important, stayed out of trouble in the closing laps.  Sieg finished ahead of rivals Blake Koch, Jeremy Clements and Ross Chastain, giving him more points to work with during the final stretch of the regular season. The small independent team that could stayed strong on a day when a fellow underdog, Michael McDowell, finally cashed in on a top-tier ride with Richard Childress Racing and took his first major NASCAR win.

Sieg remains 15 points above the Chase cutoff, his closest pursuer now Dakoda Armstrong after a strong weekend performance.  It was a rough weekend but a quick response by the No. 39 team and a little bit of luck means that Sieg still has a chance to make the inaugural NXS Chase.  Yet his margin for error, like that of all the bubble drivers, will be thin. – Bryan Gable

Camping World Truck Series: Brett Moffitt Has Earned a Full-Time Ride – Filling in for Matt Tifft at the No. 11 of Red Horse Racing, Brett Moffitt has made a case for himself in deserving a full-time ride somewhere in NASCAR. Jumping into the truck at the last minute in July while Tifft continued brain tumor recovery Moffitt saw his hopes go up in smoke, literally, after suffering an engine failure at Kentucky Speedway just 26 laps into the race. But since then, finishes of third, second and first at Pocono, Bristol and Michigan respectively have shown he’s up to the task on the racetrack. Even better is that he’ll do it cleanly, done without needing to rough up fellow competitors along the way. Moffitt’s Saturday win may have taken a certain Chase berth away from RHR teammate Timothy Peters but it didn’t end with both trucks totaled, either.

“I’m here to win – I said it earlier and I’ll say it again, I’m not going to wreck him (Peters) for it,” Moffitt said after the race. “I’m going to race him clean because I know he needs to get in the Chase, but this team needs to win and these guys deserve to win. That’s what we come to do and our partners at Toyota want to do the same and we got it.”

Moffitt, whose time with RHR is winding to a close (his last start is next weekend), called the win “everything I needed to have happen and it couldn’t happen at a better [time].” He’s absolutely correct. Three straight top-5 finishes is certainly something you can go to a sponsor with, but having a win as a part of that, especially in the form of a thrilling three-wide, last-lap pass just holds more value.

Someone needs to pick this kid up quickly. – Beth Lunkenheimer

IndyCar: Pagenaud Tops Power in Texas Tussle – Simon Pagenaud fell four spots short of his first career oval win in the Verizon IndyCar Series. However, the Frenchman’s run might have finally turned the championship battle with Team Penske teammate Will Power back in his direction.
Restarting outside the top 10, Pagenaud had a long way to climb to catch Power, who took the green flag in fourth. Pagenaud did just that, rising past his teammate in the final 50 laps and even contending for the win before settling for fourth.
“I thought we were going to get it, but when it went four-wide I got touched, [it] pushed me into (James Hinchcliffe) and I had to back out of it or there was going to be a big wreck,” Pagenaud said. “The Hewlett Packard Enterprise Chevy just got better and better all night. I really thought it was going to come together right at the end when we got back on the lead lap. We were able to come in for tires. Everything nearly came together.”
Power, who would settle for eighth after contending for the lead early, admitted that the race changed the championship battle.
“Yeah, I would say that,” Power said. “Obviously, there are still plenty of points on the table. Simon (Pagenaud) did a good job to get up there, get his lap back and get tires to make it up there. But that was an intense race there at the end. I kind of just stayed out of it.”
With this result, Pagenaud increased his points lead over Power to 28 with just two races left – IndyCar’s return to Watkins Glen International and the double-points finale at Sonoma Raceway. – Aaron Bearden
Sports Cars: The CTSC Had A Slog at VIR – Last weekend saw some beautiful weather for a number of series.  The IMSA WeatherTech SportsCar Championship raced under warm and sunny skies on Sunday, for example while the European Le Mans Series had a great race under the sun at Circuit Paul Ricard in France.
The IMSA Continental Tire SportsCar Challenge was supposed to have a nice race on Saturday afternoon as well at Virginia International Raceway. Unfortunately, Mother Nature had other plans that ultimately affected the WeatherTech race as well if you made a mistake.

The race started out under threatening skies, then the rain started to fall.  Drivers started sliding off the course left and right on their slick tires.  With no paved runoff, it did not take long for drivers to get familiar with tire barriers.  The full course caution flew. Then, the rains kicked it up multiple notches.  Chaps, you can’t race in that kind of downpour.  The fact the track was freshly repaved only made the situation worse.

It's bad right now. We are under caution but lots of standing water. Red coming. Drivers can't see anything! #OTGP pic.twitter.com/RFNIn3y8UH

As a result, IMSA was forced to red flag the Oak Tree Grand Prix for 52 minutes in order to wait for the weather to clear and take care of a substantial amount of standing water. Only 39 laps were completed for the overall leaders over the 2.5 hour distance.  Even once the race went back to green, the track was still completely wet.

CJ Wilson Racing’s No. 33 of Marc Miller and Danny Burkett passed Multimatic Motorsports’ No. 15 of Scott Maxwell and Billy Johnson on the final restart and held on take the team’s first-ever GS victory.  In ST, HART’s No. 93 Honda Civic Si of team owner Chad Gilsinger and Ryan Eversley won despite an early spin in the rain. – Phil Allaway

Formula 1: Rosberg Takes Belgian GP – With teammate Lewis Hamilton relegated to a position at the back of the field owing to numerous engine unit changes the Belgian Grand Prix looked like it would be Nico Rosberg’s to lose.

Rosberg managed a clean getaway at the start and never looked in the rear-view, coasting to victory rather easily.  Even the difficult tire strategies that others played made no difference as Rosberg earned his sixth win of the year and closed the championship gap between he and Hamilton to nine points.

The start of the race proved to be rather dramatic. Max Verstappen reeled off slow then closed up on the Ferraris of Kimi Raikkonen and Sebastian Vettel at turn 1 in a moment that would set all three back as they bounced off one another.  Each member of the trio made stops to fix damage, moves that would set them back from finishing near the podium.
Daniel Ricciardo pushed his way up to second spot but had little in the manner of a challenge for Rosberg. Hamilton enjoyed taking advantage of the calamities of the race to take the third spot on the podium in what should be considered a rather amazing rescue.
Kevin Magnussen provided the scary moment of the race when he lost control of his car heading along Eau Rouge, spinning out and nailing the safety barrier.  Magnussen walked away from the violent impact in an incident that looked as though it should have been much worse.  The wreck brought out a lengthy cleanup and safety car period.
Rounding out the top-5 finishers were the Force India duo of Nico Hulkenberg and Sergio Perez. Now, Formula 1 turns toward south Europe as this weekend is the Italian Grand Prix at Monza.  –  Huston Ladner