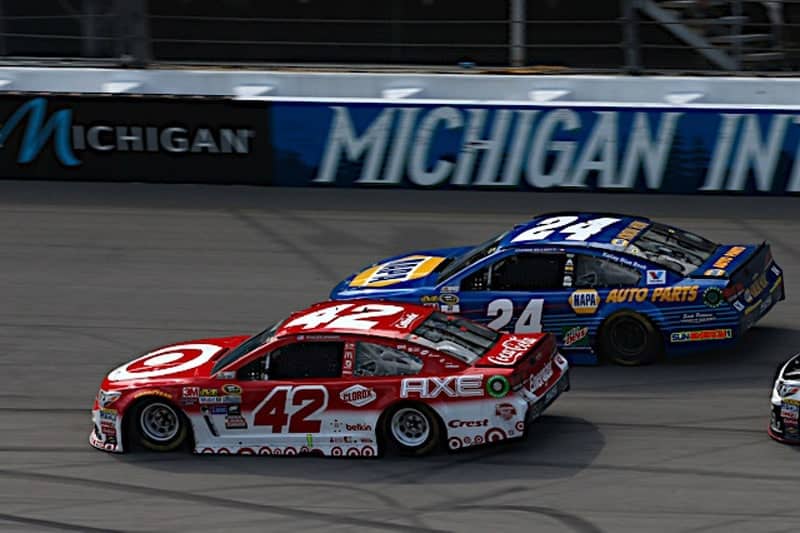 If this season has any theme, it’s that this sport is alive and well with young talent who have bright futures. So far across NASCAR’s three national series, rookies have won multiple races, posed a legitimate threat for their own series championship, and pulled into Victory Lane for the first time. While Kyle Larson isn’t a rookie, he is one of several drivers in 2016 who have made it to Victory Lane for the first time in their career and believes he can contend for this year’s championship. However, Larson will have to go through several other drivers to make it happen, many of whom are within his same age group.

Here are some young drivers in the Sprint Cup Series who could realistically win their first title in the very near future.

1. Chase Elliott – This 20-year-old is a bit of a throwback, as he regularly takes responsibility for his own mistakes on the track rather than pointing the finger at someone else.

Elliott has a 28-point cushion with two races left in his race to make the Chase in his rookie year. Jeff Gordon’s successor hasn’t won yet, but we all know that it’s just a matter of time. His ability to not panic and search for ways to become a better driver are championship qualities. And considering he drives for Hendrick Motorsports, a championship will likely come sooner rather than later for Awesome Bill from Dawsonville’s son.

2. Kyle Larson – You probably know the 24-year-old visited Victory Lane after a Sprint Cup race for the first time this past weekend at Michigan. His rise through the ranks has come quickly, especially since Tony Stewart went out of his way to comment how talented Larson was while Larson was still driving midgets and sprints on dirt tracks a few years back. Now that Larson has won a race, it wouldn’t be a surprise to see him do it again. The one issue he’s had early in his career is consistency, and that may be the only thing separating him and a title in the near future.

3. Ryan Blaney – He is not quite on an elite team like Elliott nor has he had the staying power of Larson, but the 22-year-old got a boost when his No. 21 Wood Brothers car became affiliated with Team Penske this season, allowing Blaney to run a full schedule. The rookie has shown he has the talent to win, but like Elliott is still searching for his first trip to Victory Lane in the Sprint Cup Series. Blaney may always be compared to Elliott after their rookie of the year duel, but if he can have a bit of good luck in terms of missing accidents, a championship to add to the comparison may well rest in his future.

4. Erik Jones – It was about this time last year that car owner Joe Gibbs was going gaga over how good of a driver this now 20-year-old is and was going to be. It may have seemed a bit overboard at first, but no one is doubting the Coach’s evaluation now.

Jones will officially be a teammate of Martin Truex, Jr. next year in the Sprint Cup series, so the learning curve will start at a young age. Jones has three wins in the XFINITY Series this year and 12 total (including trucks) for his career. Jones leads the way for his age group. With a little more time to learn, and a likely jump to a regular ride at Gibbs in the future, it’s not difficult to envision the Michigan native as a champion.

5. William Byron – When you’re a teenaged racecar driver and Rick Hendrick comes calling, you pretty much have to ask the same question as the 18-year-old Byron did a couple of weeks ago: Where do I sign?

Byron is currently leading the Camping World Truck Series with five wins and sits atop the standings with the Chase approaching. He’s proven he knows how to finish races and his squeaky clean image should fit right in with the type of personalities that Hendrick likes to have on his team. Byron still has a lot of learning to do, but being in the XFINITY Series next year with an elite team is a good place to grow.