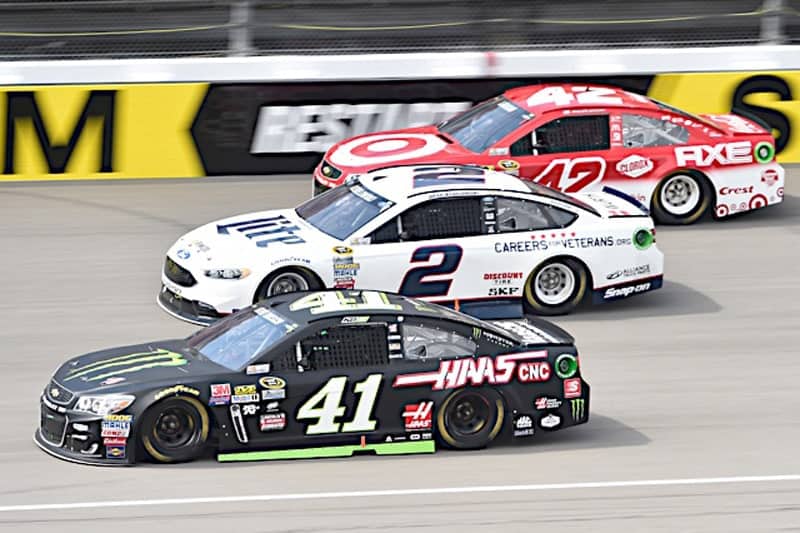 After weeks – no, years – spent waiting for a new young driver to score a legitimate breakthrough in the NASCAR Sprint Cup Series, fans of the series saw not one, but two future stars shine in the Irish Hills of Michigan.

In the end, it was Kyle Larson that got the best of Chase Elliott on a late restart to take a long-awaited first victory in the Pure Michigan 400 and stamp his name into the Chase field. With Larson’s win, he joins a group of young stars including Elliott, Austin Dillon and Chris Buescher on the preliminary Chase grid.

However, while the youth shone bright in Michigan, the veterans still have a stronghold over the sport.

Was Larson’s win enough to elevate him into the top 10? Did good runs from Elliott or Ryan Blaney help elevate them back into the field?

“Keselowski made waves early in the weekend when he drove a 1901 Ford around the two-mile oval. He probably should’ve stuck with it all weekend, too. It had a better chance to pass post-race inspection.” – Aaron Bearden, Frontstretch
“Should have won the Southern 500 last year. He will be good in his throwback scheme.” – Dustin Albino, Frontstretch

“Has had a terrible two-race-stretch, but is still running well at least at some point almost each week. ” – Doug Turnbull, PRN

“Time to step up the pace. The Chase is nigh.” – Spencer

“Great run to 10th at MIS after the air hose snafu.” – Spencer

“Couldn’t back up past Michigan dominance with an ill-handling car most of the race.” – Turnbull

“YOUR TEAM GOT RED GATORADE ALL OVER MY GRAY SHIRT IN VICTORY LANE. CONGRATULATIONS, WHERE DO I SEND THE DRY-CLEANING BILL?” – @AnnoyingRaceFan
“You keep knocking on the door to Victory Lane, eventually it opens.” – Jim Utter, Motorsport

“Looked like a potential winner early on at Michigan. Next up: Darlington, where JJ’s won three times.” – Bearden
“Hendrick Motorsports appears to be turning the corner just in time for the Chase.” – Utter

“He had 14 top-10 finishes in the first 16 events. In the last eight, he’s had two. On the downside.” – Albino
“Struggled all day with a loose race car but rallied to finish better than he started. After some great races in the second quarter of the season, Busch has gone six-straight races without a finish higher the 10th.” – Pete McCole, AutoRacing1

These two drivers each earned their way into the Chase with emotional wins over the summer, but they’ll need to pick things back up and find some luck if they hope to make it back into the top 10.

Martin Truex, Jr. (13 Points) – “What does this dude need to do to have a clean day? Car falls off the jack and its like he’s Fall-Apart Rabbit from Bonkers.” – Allaway

Tony Stewart (12 Points) – “Back-to-back tough races for Smoke. However, his won goal prior to the 2016 season was winning Darlington, a track he’s never been victorious at. Here’s your shot, Smoke. ” – Albino