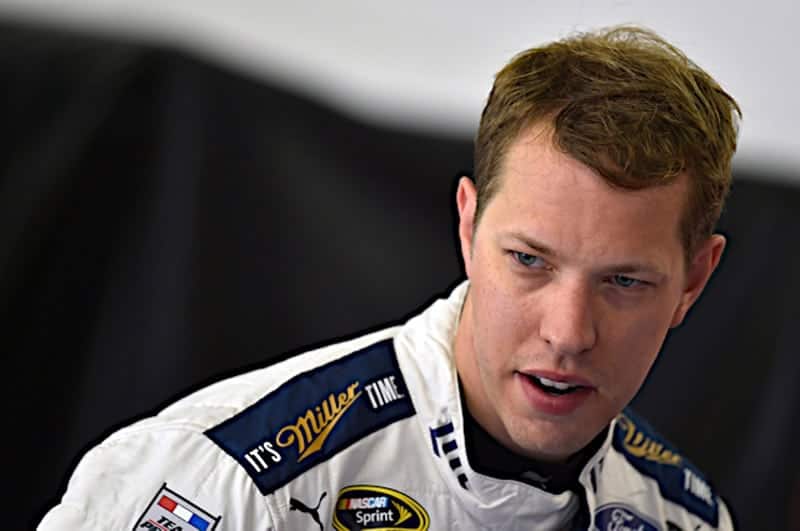 On Wednesday, NASCAR released their weekly penalty report.  It contained a wide assortment of warnings, but one graded penalty as well.

Brad Keselowski‘s No. 2 Miller Lite Ford flunked the post-race laser inspection on Sunday at Michigan.  It is a penalty that has happened multiple times recently.

NASCAR ended up assessing the No. 2 team a P2-level penalty.  As a result, ten driver points have been docked from Keselowski and ten owner points from Team Penske.  In addition, crew chief Paul Wolfe was fined $15,000.  Also, just to add insult to injury, the No. 2 also failed the pre-race laser inspection twice.  That earned the team a warning.

Team Penske’s No. 2 was just one of the teams that were warned for failing the pre-race laser inspection.  Tommy Baldwin Racing’s No. 7 for Regan Smith flunked twice, as did Richard Childress Racing’s No. 31 for Ryan Newman and the Circle Sport-Leavine Family Racing No. 95 for Michael McDowell.  These teams also earned warnings.

Hendrick Motorsports’ No. 5 for Kasey Kahne and No. 24 for Chase Elliott, along with HScott Motorsports’ No. 46 for Michael Annett failed the pre-qualifying laser inspection twice on Friday.  They were all given warnings.

Finally, Smith, Roush Fenway Racing’s Trevor Bayne and Chip Ganassi Racing with Felix Sabates’ Kyle Larson all failed the pre-qualifying template inspection twice and were warned for it.  Smith will lose pit selection in Darlington.  Bayne reached four warnings as a result of this infraction as well, but gave up his pit selection in Michigan.

In the XFINITY Series, only one warning was issued as opposed to the 12 for Sprint Cup in Michigan.  Joe Gibbs Racing’s No. 18 for Owen Kelly was hit with a warning for failing the pre-race laser inspection twice at Road America.

Finally, in the Camping World Truck Series, GMS Racing’s Spencer Gallagher was fined $5,000 for approaching the racing surface on Saturday.  This occurred after Gallagher crashed out of the race and was concerned for the condition of Christopher Bell.  Gallagher sprinted up to where Bell’s truck stopped, then went to the ambulance to check on Bell’s condition.

There is another article on Frontstretch.com about James Hinchcliffe’s car failing post race inspection at Texas:

Runner-up finisher James Hinchcliffe and Schmidt Peterson Motorsports have been issued a 25-point penalty in both the drivers and owners championships and have been fined $20,000 after Hinchcliffe’s No. 5 ARROW Electronics Honda failed post-race inspection.

Hinchcliffe’s Honda was ruled to be in violation of Rule 14.6.8.2.2 of the Verizon IndyCar Series rule book, indicating that the car had too much domed skid wear following the event’s conclusion.

“In our post-race analysis this week it was determined the skid plate on the No. 5 entry was worn and in violation of our rules,” Jay Frye, INDYCAR president of competition and operations said in a release. “This was both a performance advantage and a safety concern, as the domed portion of the skid had been ground down to the point it would have been ineffective.”

So, if I may ask either Mr. Helton or Mr. O’Donnell (I won’t bother asking the brainless bozzo, as he most likely isn’t sober enough to give a coherent answer), what rule number was broken, and what exactly was the failure? Was it a panel out of line? Was it something else? Please provide an explanation as to how this “failure” would have effected the performance of Brad’s car. After all, if INDYCAR can be open and transparent by explaining what the penalty was, and why Hinch’s car failed, don’t you think it was about time NASCAR was just as open and transparent about these “failures”?

Greetings, Ken.
If you receive a warning, there is no rule number noted in the Penalty Report.

However, in the case of Keselowski and Gallagher, they do have rules listed. Both drivers violated Section 12.1, the catch-all “Actions Detrimental to Stock Car Racing.” Keselowski violated Rule 20.17.3.1.2, while Gallagher violated Rule 10.4.2.1. NASCAR doesn’t always make the rule numbers readily available like nearly every other series. The only reason I got them (other than 12.1, since everyone that gets fined gets that) is that NASCAR puts the actual reports on NASCARMedia.com. It’s an invitation-only site for working media. Most of us here at Frontstretch have logins there.

Since NASCAR still hasn’t put the rule books online for public viewing in contrast to other sanctioning bodies like IMSA or Pirelli World Challenge, I don’t know of the official wording of Rule 20.17.3.1.2.

What rule book? It’s printed in invisible ink in block letters on the head of a pin.

How can Kyle Larson’s car pass post race inspection with flat tires? Replacing the tires would be an unapproved adjustment made between the checkered flag and inspection. These show off burn outs need to stop.

It’s obvious whose teams he doesn’t drive for.

Phil, thank you for answering my query. I was unaware of the NASCARMedia.com site. If this site is available, why aren’t any journalists conveying the information to fans through their respective websites/blogs? Let’s just say inquiring minds want to know! It would also alleviate much of the suspicion many fans have about the inspection process. Is it true some teams get hammered (say, Penske) for the same thing other teams get away with (say, Hendrick). Does anyone from an independent body oversee this, so that we-the-fans know everything is on the up-and-up? This has always been a suspicion since the mid-60’s when Ford sat out most of the 1966 season due to their famous Cammer engine being banned. In 1965, Chrysler sat out most of the season when NASCAR outlawed the Hemi, only to renege on the ban just before the Southern 500. Bill France actually begged Chrysler’s racing representative Ronnie Householder to bring his factory teams back. The same wasn’t true the next year when it was Ford’s turn to sit out. Ford had to get down on bended knee and beg France to let them back in. That was when France let Ford know he didn’t like them, a feeling his grandson, or his grandson’s yes-men, still feel today. Fords had a hard time getting through tech inspection for several years, until the factories left for a while in 1971. And remember, this was at the same time good ol” Smokey brought in his famous 7/8ths Chevelle to the track.

I know former completion director Robin Pemberton called any fans who complained about NASCAR’s lack of transparency a bunch of whiners and crybabies. Guess Mr. Pemberton wasn’t paying attention to the dwindling attendance and TV ratings. Which brings me to the super-secret inspections done at the NASCAR Research Centre in Concorde, North Carolina. Is there any witnesses to this inspection, so NASCAR isn’t accused of bias? With what you answered, you and your journalistic colleagues owe it the ones who pay big money to attend the races (ie, the fans) an explanation of the rule violated, and what the perceived advantage is.

Again, thank you for responding to my comments.