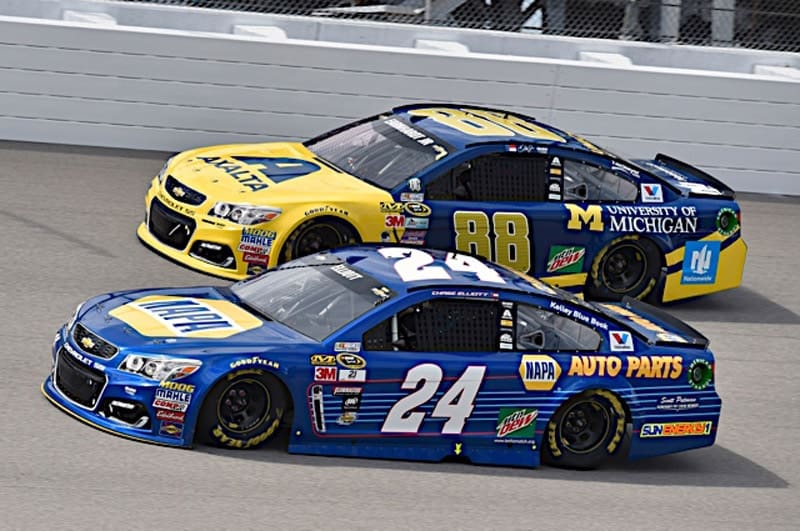 Sunday’s Pure Michigan 400 was more than just a dream come true for Kyle Larson, it was also the final test run for the Sprint Cup Series in the proposed 2017 rules package.

Coming off of previous years at Michigan International Speedway that saw drivers running nearly flat-out around the two-mile oval, the lessened downforce from the lower-low package forced drivers to hit the brakes, slowing over 30 mph in the turns.

The package, created to continue to trend of reducing downforce in an effort to put racing more into the driver’s hands, ran in only three races this season — at both Michigan races and at Kentucky Speedway in July, following test sessions at Michigan (May 17) and Kentucky (June 13-14) and a similar package being used in the Sprint All-Star Race at Charlotte Motor Speedway. However, NASCAR seems set to use the lower-low package next season after finishing the season under the current package.

Is implementing the prospective package for 2017 the right call, or could NASCAR be making a mistake?

NASCAR’s On the Right Path

NASCAR’s proposed 2017 rules changes are yet another step in the right direction when it comes to racing competition. Riffing off of this year’s low-downforce package, the potential ’17 setup used at Michigan and Kentucky has provided solid racing and should definitely be implemented next season.

Why? Well, first off, the fans seem to favor it. Motorsports writer Jeff Gluck’s weekly Twitter poll shows all three races run under the proposed rules as being considered a “good race,” with all three scoring at least 57 percent favorability. And while the three races are buried in the middle among all 24 races run this season, they are among the highest scored cookie-cutter tracks. It’s the short tracks, road courses, and plate races that are beating Michigan and Kentucky — all tracks where car control is necessary for a good finish as opposed to the aero-dependency of the intermediates. The only such tracks that beat Michigan and Kentucky?

Both of those tracks are known for their worn-out surfaces where grip is hard to come by. That surface makes the cars harder to drive, which is what drivers have been asking NASCAR to do over the past few years. The other cookie-cutter tracks (Las Vegas, Texas, Kansas, and Charlotte) all score below Michigan, and three score below Kentucky on Gluck’s chart.

Each step NASCAR has made in regard to making the cars harder to drive has been met with cheers from the stakeholders in the sport because it has improved the quality of racing. The proposed 2017 rules package is another such step. Speeds were way up at Michigan this weekend, with drivers hitting the high 210s before slowing down, making it easier for drivers to play with the throttle in the corners and try to out-drive their competition.

Imagine implementing this setup across the board at every track next season. And combining the new package with a softer Goodyear tire will do even more for the sport. Already great races at Auto Club, Atlanta, Dover and the road courses will become even better as drivers will have to rely less on their cars and more on their skill. It’s no surprise that Kyle Larson, Joey Logano and Brad Keselowski all took wins this season while running the package. They’re among the best when it comes to car control.

With a 2017 season built around this proposed package, expect even greater racing and better chances to see first-time winners like Larson break through.

With September’s arrival, schools are back in session for the fall semester, and much like the students recovering from syllabus week parties, NASCAR’s not quite ready for the final test just yet.

With the success NASCAR’s found with 2016’s low downforce package — photo finishes, great racing and genuine crashes — they can’t be blamed for wanting to take away more downforce. Truthfully, the prospective 2017 rules package seems like it could be a step in the right direction, too. However, the sanctioning body simply doesn’t know enough yet.

NASCAR’s tested the current edition lower-low downforce track at two different tracks this season, but in truth only one of the track’s provided clear, usable data. Michigan’s two races offered a noticeable difference in the on-track product, with drivers forced to use heavier braking and set passes up differently than they have in recent years.

As for the other test – Kentucky – there were simply too many variables to garner any useful data.

Remember, this summer’s race at Kentucky was held on a newly-repaved track, with altered banking in the corners and Goodyear’s hardest tire compound making it difficult to gauge tire wear. Because of all of these variables, any data garnered from the race has lost value because there are no previous experiences on the current racing surface to compare the results to.

With Kentucky a virtual wild card that leaves only two races at Michigan as legitimate tests for the package, and that’s not enough to determine if the package should be implemented next season.

“You test it at a new repave like Kentucky and you test it at a really, really fast single-groove track right now like Michigan and it’s really hard to gauge where it’s at,” Carl Edwards told NASCAR before the second Michigan race.

The actual opinion of the package seems to be positive overall. Tony Stewart praised the package in June when he was able to make passes and earn a top-10 finish, and Brad Keselowski echoed Stewart’s sentiment after both Kentucky and the August race in Michigan.

The problem isn’t with the package’s perception. It’s simply that there isn’t enough data.

College students still have multiple homework assignments, a handful of tests and a project separating them from their finals in the winter. In that same vein, NASCAR would be wise to follow their lead and scatter a few more tests before implementing the lower-low downforce package.

Why? Because they could get lucky if they take the final test now, but they still have much to learn.

They still need to lose the sideskirts and huge rear quarter panels. There’s still an alarmingly high dependency on side force which we saw proof of by Kyle Busch going around so easily when someone swept past him on the outside. And lose the splitter for the love of the almighty.. stop sealing off the front ends.

Open the front grills …but does it really matter Nascar is dying ..been a fan since the late 60’s ..this all so artificial