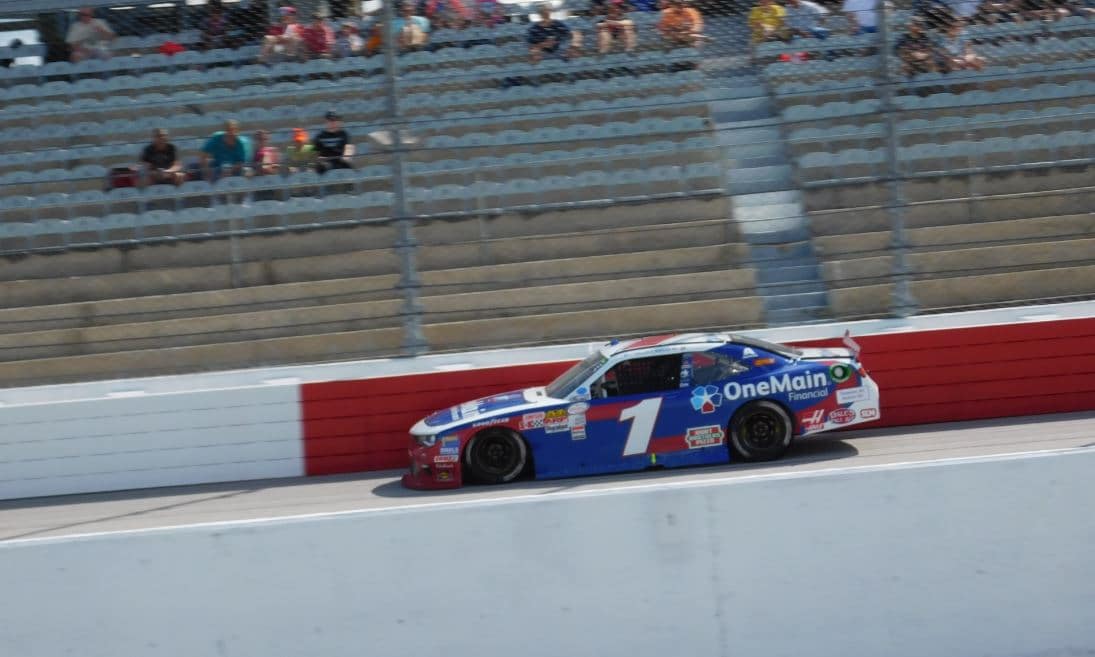 Elliott Sadler, leading the most laps of the afternoon at Darlington Raceway, almost threw the victory away… twice.

With two laps to go in Saturday’s VFW Sport Clips Help A Hero 200, it was Sadler who brushed the wall in turn two, giving hard-charging Denny Hamlin a shot to steal the win.

“Those last two laps, I messed up,” Sadler said. “Just ran out of room and almost gave it to [Hamlin]. All in all, we were able to hold him off.”

Playing it conservative one lap later in turn two, Sadler was taken double-wide into turn three by Hamlin, who was without success, as Sadler surged ahead off turn four and won at Darlington for the first time, grabbing his second win of 2016 and 12th of his XFINITY Series career.

“I could see [Hamlin] coming and I was trying to make up some time,” Sadler said. “I started focusing on the lapped car in front of me. Darlington means a lot to me from a history standpoint. I used to come here as a kid and I’ve had a lot of great chances to win here but never did.”

Driving for JR Motorsports, Sadler dedicated his win to car owner Dale Earnhardt, Jr., who will not return to NASCAR competition for the remainder of 2016 due to a concussion.

“This win today is for my man Dale Earnhardt, Jr.,” he continued. “I know he’s going through a tough time. He’s not being able to race his racecar for the rest of the year. He was riding there with me today. He’s given me such a great opportunity to be a part of his race team. ”

“We definitely got a good line going through [Turns] 1 and 2,” Hamlin said. “I didn’t get a good restart, he got position on me. Track position meant so much. When we ran the high line, my car was entirely too tight to run low.”

Coming home third was Daniel Suarez, who looked to have the car to beat following the final restart with 36 laps to go. He, however, soon fell off the pace after losing grip in his Goodyear rubber, later hitting the wall.

“I was pushing the car to try and get the lead and I hit the wall,” he said. “I felt that my car didn’t like that.”

Indeed, if there’s one thing racecars don’t like about Darlington is the constant contact with the wall. Starting the afternoon with bright white and red colors, the outside walls of the track soon turned black as nearly every car in the field found themselves grinding against it.

The most significant accident of the day occurred in turn three when then-race leader Kyle Larson spun his No. 42 Chevrolet while entering pit road. Ryan Blaney, Carl Long and Ross Chastain piled in behind him, bringing out the race’s final yellow.

Though rebounding to a fourth-place effort, Larson denied comment after the race.

The same can’t be said about fellow Chip Ganassi Racing teammate Brennan Poole, however, as the 2016 XFINITY rookie grabbed a top-five result in his debut showing at Darlington.

“When I realized I wasn’t going to get [Kyle Larson for fourth] I started saving my tires,” Poole said. “And then the [No.] 20 caught me and we were racing really hard. It was just a lot of fun there at the end of the race.”

Ryan Preece finished 10th, earning his first career top-10 finish in his 27th start. In fact, Preece has topped his career-high finish in each of the last three races of 2016.