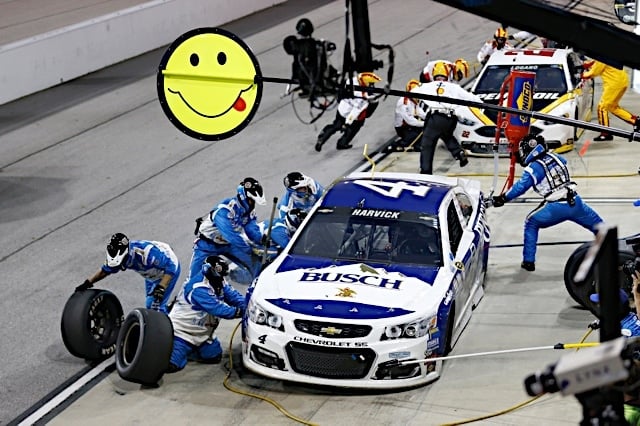 When somebody leads 214 of 367 laps of the Southern 500 at Darlington Raceway and fails to get the win, frustration is not only natural, but it’s expected.

For Kevin Harvick, the No. 4 Stewart-Haas Racing driver blew the doors off the competition in the early going, leading the opening 93 circuits from pole before returning to the top spot on Lap 139.

This all came to a delayed halt during a pit stop with 85 laps to go, when Harvick dropped to 12th from the race lead after a broken right-rear pit gun demolished Harvick’s precious track position.

“We had a great car,” Harvick said. “The guys in the garage and at the shop continue to do a great job and we continue to give it away on pit road. Pretty much summed up the night. Just the dominant car and just three bad pit stops on pit road.”

Climbing back into the top 5, a rash of late yellows led to two more slow stops for Harvick, who was bested by eventual race winner Martin Truex, Jr. each time.

“We have championship cars and we’re mediocre on pit road,” he continued. “It’s been that way for a few years.”

Indeed, the pit crew debacle at the No. 4 team has seemed to last as long as the team itself, as Harvick continues through his third year at SHR.

“You have a couple good weeks here and there and every once in a while, you just put together a day,” he said. “But they can’t put together a whole day on pit road right now.”

With only one win since March, Harvick’s patience level is officially pegged as the Sprint Cup Series completes the regular season next week at Richmond.

“I’m over being a cheerleader,” he said. “Those guys get paid a lot of money to perform on pit road and cheerleading hasn’t really been working. You’ve got to get after it on pit road and do your job.”

Where does Kevin in his faux reality bubble think he was ever a “cheerleader” to anybody but himself? Except of course his boyfriend “Smoke”. Lol.

I know his pit crew has let him down several times, however how can you blame a tire changer for an equipment malfunction?

you’re right – the equipment failure was the big mishap on the night, but the stop before and the stop after they lost spots. The larger issue is that they are consistently losing spots on pit road, which sucks. Seems like Gibbs invested in pit crew / training more so than cars a few years back, and those guys continue to cut fast times – and now they’ve put it all together in a way that most teams haven’t. NOW, i know that throwing people under the bus is not a “good” thing – but i think he’s been “nice” on calling them out – but he’s right – it’s like any dead weight on any team, you can only fix or coddle for so long until you give the harsh words. I know he’s done this in the past, and is notorious for doing so, but – when you have cars like that, and his willingness to drive it up through the field (which he seems to have to do more than he should) – at some point – you reach a breaking point. That breaking point won him a championship in ’14. Lets see what happens this year.

Well I’m sure its tough to work on a pit crew for a team whose driver will go on camera after the race and throw you under the bus when you don’t nail every stop. These guys could get the same amount of money working on a different team and not have an a-hole for a driver.

Dissatisfaction is fine, address the issue where it needs to be addressed IN PRIVATE WITHIN COMPANY WALLS. What good is to yell to the world with the majority of people you are addressing ARE NOT EMPLOYED IN THE PROFESSION and have no understanding other than their trivial and insignificant comments (like my own). Trying to garner sympathy seems to have backfired as it always does with him. Gee if I was working with Happy public humiliation is a great motivator. NOT! The guy is an idiot emotionally and otherwise.