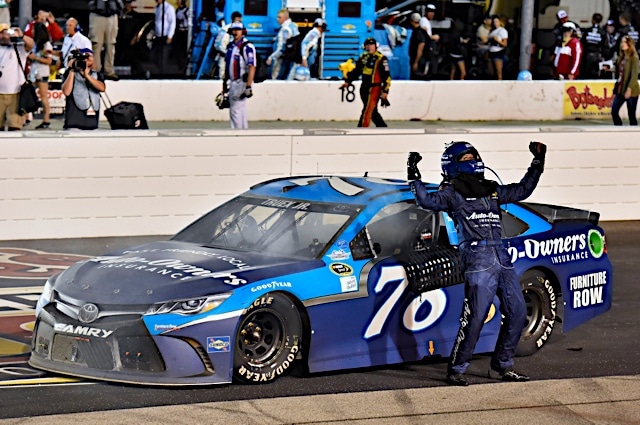 Who’s in the headline: For the first time in his career, Martin Truex, Jr. has won multiple races in a single season. Kevin Harvick was the dominant car for the vast majority of Sunday night’s Southern 500, but pit road miscues put him behind in the final laps and he was unable to overcome the handicap. Truex, now signed long-term with Furniture Row Racing, has capitalized on the team’s partnership with Joe Gibbs Racing this season. One year removed from a surprise Final Four bid, it won’t be a surprise this year if he  makes a serious run at a championship with his No. 78 team. Truex also now owns a second NASCAR crown jewel event after earning a Coca-Cola 600 trophy back in May.

What happened: Harvick started on the pole thanks to the loss of qualifying to Hurricane Hermine. When the green flag flew, he took off and led the first 93 laps before Brad Keselowski took control. Three laps later, the caution flew for Trevor Bayne and trapped 25 cars a lap down, including Harvick. After taking the wave around, Harvick clawed his way back to the point, past Keselowski, and regained the lead on lap 139. From that point on, Keselowski faded and it was Harvick’s race to lose.

Sadly, his crew did just that, thanks to a faulty air gun during a caution flag on lap 251. Once that happened, dropping Harvick to 12th, the race was wide open. Kyle Larson seized control after a series of restarts and led for 45 laps; then the penultimate caution flew and Ryan Newman stayed out to grab the lead. He held it for nine laps before succumbing to the advances of Truex.

Once Truex got out front, that was all she wrote, though Harvick made a frantic bid to make it back to the top spot. Up to second, he was closing on Truex in the final laps before an infamous Darlington Stripe officially derailed his bid for victory.

Why you should care: Much of the talk after Michigan centered around the fact that other teams, specifically Chevrolet, might be catching up to the JGR camp. After Darlington, it looks like the two sides may well duel it out all the way to Homestead. Harvick and Larson both had strong showings at the front of the field. At the same time, Truex, Hamlin and Kenseth all showed the ability to control the pace with Toyotas. The Ford camp is in the conversation as well, led by Team Penske and in particular Keselowski. While not dominant at any point Sunday, they certainly have the ability to stretch fuel and sneak their way into the mix through strategy. In a year of parity up top, the Chase is going to be far from a foregone conclusion as to which manufacturer or team has an edge.

What your friends are talking about: Try as you might to deny it, the continuing health status of Dale Earnhardt, Jr. is at the forefront of conversations among fans. Earnhardt stopped by the track Sunday to provide an update with his doctor and team owner. It appears that his recovery has picked up speed since it was announced he would be out of the car for the rest of this season. His doctor, Micky Collins, pointed out the stress of worrying about getting back in the sport was most likely hindering Earnhardt’s progress. While everyone involved is painting a positive picture about the driver’s long-term prospects – Earnhardt steadfastly maintains he isn’t retiring – there has to be an honest assessment about his future in Cup. Alex Bowman will drive his No. 88 in eight of the final ten races, a short-term fix that could be a long-term audition to wind up somewhere within the Hendrick family of cars next year.

CATANZARETI: Earnhardt Says ‘My Heart Wants Me To Continue’

In a development that could have huge ramifications for the Chase, Ryan Newman’s car failed post-race laser inspection at Darlington. The resulting penalty could include points which make it even more difficult for him to overcome Jamie McMurray for the final spot in the Chase after Richmond. Obviously, the nature of Darlington and contact that occurs with the outside wall may have caused extenuating circumstances here, ones that will be taken into consideration when NASCAR doles out fines and penalties this week. If there is a point penalty, look for there to be an expedited appeal process so that everyone knows the playing field entering Richmond. No one wants a repeat of a few years ago.

In one of those moments where cooler heads should prevail, there is a possibility Ryan Blaney could be fined after his efforts in Darlington practice. While truly embracing the throwback aspect of the weekend, Blaney went out for a couple of stints during the first session without his driving gloves. NASCAR noticed during his second time on track and summoned him to the garage as a penalty. For safety reasons, a rule has been in place since the death of Dale Earnhardt requiring gloves be worn at all times during on-track activity; however, let’s hope NASCAR lets this one go in the name of this new Darlington tradition.

NASCAR’s Most Popular Driver voting for 2016 opened Sunday, Sept. 4 at midnight ET. It will remain open until 11:59 p.m. on Nov. 20. The question is if Earnhardt Jr. can win the award for a 15th straight time or whether another driver be able to wrest the crown from his head? The voting has not been close for years but it will be interesting to see how it plays out this time; Earnhardt, of course, will be out the remainder of the season.

Richard Petty turns 80 on July 2 next year. When you are the King, you don’t just celebrate for a day. The Petty family and the vast suite of organizations that comprise their empire will be spending the next 10 months celebrating the pending event. For fans who want to stay abreast of the activities as they unfold they can bookmark www.kings80th.com.

Who is mad: In one of those rare moments for modern NASCAR racing there were actual engine failures during Sunday’s race. Trevor Bayne lost a cylinder early in the event and, try as he might to soldier on, eventually the powerplant failed after 161 laps, relegating him to a 40th-place finish. For a driver who still had an outside chance of pointing his way into the Chase, Bayne is now in a win-and-you’re-in scenario for Richmond.

Ouch. The odds are, barring a miracle, 2016 will wind up another disappointing season for easily the most improved Roush Fenway Racing driver, one that at one point looked like a huge surprise for this year’s postseason field.

Speaking of DNFs, an overheating motor took Tony Stewart out of the event and secured the fact that he will never win a NASCAR Cup race on the egg-shaped oval at Darlington. Stewart was working his way toward the front and felt hopeful about the potential to break his winless streak at the facility. However, it all came to a Smoke-y end once the engine let go on lap 317.

Harvick was laying waste to the field on Sunday night, pulling out to significant leads over and over until the pit crew let him down… again. A faulty pit gun caused consecutive poor stops, ones that put Harvick well outside the top 10 late in the event. The end result was Happy Harvick was less than ecstatic over his team’s performance.

“These guys get paid a lot of money to perform on pit road, and cheerleading hasn’t really been working.” he said. “You’ve got to get after it on pit road and do your job.”

The 2014 Cup champion, despite such public criticism, is absolutely right. This type of performance at Homestead would easily cost the driver a shot at the title.

Who is happy: Kasey Kahne is on the outside looking in at the Chase even though his team is getting it together. Sunday night, a seventh-place result became the third consecutive top 15 for a No. 5 team slowly improving. Kahne is in a must-win scenario to make the Chase but that hasn’t stopped him in the past. The momentum from this run just might be enough to put him over the top at Richmond to secure yet another last-minute Chase berth.

Chris Buescher beat David Ragan by four spots again Sunday to further cement himself into the 30th position in the point standings, a spot which will lock him inside the Chase. Buescher is 11 points ahead of Ragan heading into the final race of the regular season at Richmond. Should Buescher finish ahead of Ragan there he’ll be all set for a Chase berth as a Cup Series rookie.

After 25 races Keselowski, Kyle Busch, Carl Edwards, Jimmie Johnson, Matt Kenseth, Denny Hamlin, Harvick, Truex, Kurt Busch, Joey Logano, Stewart and Larson are all locked into the Chase assuming they attempt Richmond. Buescher, thanks to his win at Pocono, will make the Chase if he can maintain a spot inside the top 30 in points.

Here are the remaining Chase drivers at this juncture and their position in the regular season standings:

What is in the cooler: The Track Too Tough to Tame was a little forgiving Sunday, as the number of Darlington stripes seemed reduced from previous years. On-track passes for the lead were also minimized, predominantly because the No. 4 of Harvick and Stewart-Haas Racing were so dominant. However, Throwback Weekend was a huge success both from a competitor standpoint and fan participation. While the racing wasn’t stellar, the whole experience was worth four cold Leroy Brown ales from Southern Hops Brewing.

Where do you point your DVR for next week: The final race of the regular season will set the 16 drivers to compete for the 2016 Sprint Cup championship. That event takes place at Richmond International Raceway on Saturday, Sept. 10 at 7:30 p.m. ET. It can be seen on NBCSN and streamed live on NBC Sports LiveExtra. The race can also be heard on your local MRN affiliate or SiriusXM NASCAR Channel 90.