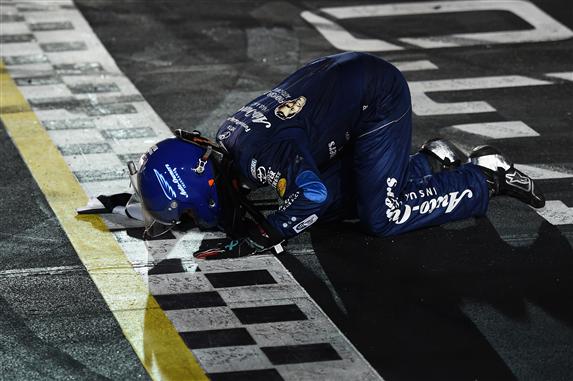 In the “where did he come from” department, the best finish in the Hendrick Motorsports stable came from Kasey Kahne.  Kahne has been strong at Darlington in the past, so his seventh-place run shouldn’t be a surprise.

But given the season Kahne’s had and how he took the stealth approach, the finish was just that. His frustrations are hard to pinpoint; he doesn’t lack talent nor does his team lack resources, but Sunday night’s run was just what he needed to get a little luck on his side.

Even as the sport evolves into something the first racers would barely recognize, there’s still a place in the sport for it’s storied history, and that’s especially apparent at Darlington, NASCAR’s original superspeedway.  If you can’t feel the sport’s rich past all around you at the track dubbed Too Tough to Tame, you probably won’t understand the sport’s roots.  It’s not just the throwback paint schemes and uniforms; it’s the understanding of who and what came before, and what this race represents.

Kyle Larson said after the race that they don’t need to have a throwback weekend to get the throwback feel at Darlington, and he’s absolutely right. Once one of the most prestigious races on the schedule (and to the drivers and teams it very much still is), the Southern 500 represents one of the last ties with the sport’s distant past, and serves as a reminder that even as the sport evolves, some things, like racers and race fans, endure.

Kevin Harvick may have started up front by virtue of owner points after qualifying was rained out on Friday, but he proved he belonged there, dominating the early part of the race.  Brad Keselowski got a taste of the lead on a restart, but he was the only driver to challenge Harvick in the first half of the race.

A slight pit mishap dropped Harvick to fifth with just over 100 laps to go, and then on a late stop under caution, an air gun malfunction got him off pit road in 12th.  He had the fastest car, but lost more than 15 total positions on pit road over the course of the race, and Harvick’s speed couldn’t overcome the issues in the pits. He finished second, but blasted his pit crew in his mandatory press conference postrace—could changes be coming as the team heads into the Chase?

Carl Edwards wasn’t bad Sunday night — he raced in the top 10 for most of the night — but only in the top 10, not looking like a contender to win and wound up 19th after being forced to pit for a tire rub. While Denny Hamlin and Kyle Busch were running near the front for most of the race, with Hamlin leading a couple of laps, the Joe Gibbs Racing camp didn’t have the advantage it enjoyed in the first half of 2016, even with satellite organization Furniture Row Racing getting the win.  Heading into the Chase, the loss of momentum could be costly.

When… did it all go sideways?
Everyone knows that the Lady in Black can chew drivers up and spit them out as easily as she can guide them home, and she gnawed on quite a few drivers Sunday night.  However, even big, bad Darlington wasn’t the cause of the day’s lowlights.  First, in the Camping world Truck Series race at Canadian Tire Motorsports Park, John Hunter Nemechek tool Cole Custer all the way across the track into the far wall to win the race, a move that raised a lot of eyebrows.  The move was beyond a bump and run, (which might have been acceptable for the win) and Custer showed his displeasure by tackling Nemechek on the front straight as he celebrated.

The Sprint Cup race also featured a move that crossed a line when Tony Stewart, frustrated with a slower Brian Scott, put Scott into the all and out of the race well before halfway.  There was no need for Stewart to turn Scott, who was already multiple laps down from a previous spin and not impeding Stewart to a significant degree for that point in the race. Both moves were both blatant and unnecessary.

It’s long been said that races are won— and lost — in the pits and that was apparent Sunday night as Truex’s crew put him in front when it counted, and when Kevin Harvick’s crew couldn’t get it done. Truex ran in the top 5 for much of the night, putting himself in just the position his crew needed to capitalize with some fast, accurate stops and a great restart by the driver when it counted most.  A second win on the season makes Truex look like a stronger title contender then last season, when he went to Homestead with a chance to win.  If he can have the same type of steady, consistent performance in the Chase, he can be in that position again, and he won’t be an underdog this time.

How… is Dale Earnhardt, Jr. doing?

Earnhardt came to Darlington to address the media this weekend and while he’s come a long way in his recovery from a concussion he suffered in June, he acknowledged that he’s got a ways to go before he gets back in the No. 88.  Dr. Micky Collins, one of Earnhardt’s neurologists, says that the lingering effects of the concussion affect the very things Earnhardt needs to be able to do to drive his race car.

“I want to make sure everyone understands the systems that are injured for Dale or the systems that make Dale Earnhardt, Jr., Dale Earnhardt, Jr.  his ability to sustain focus and stabilize his vision when he moves his head and interpret complex visual information.  Though Dale is feeling as a normal human being, to get him to that level of being a race car driver is exactly to your point it is a different set of skills than any of us in this room have,” Collins said Sunday, but added that “ I’m very confident that we will be able to do that” and that Earnhardt can make a return to racing at some point.  That’s good news for Earnhardt, who was emotional when talking about sitting out.

“I’m very disappointed.  I miss my guys, I miss the garage, I miss all of you folks (the media),” Earnhardt said.  It’s so much fun to see so many familiar faces.  That part is the disappointing part because I am just used to being here and this is sort of our circle, our family.  It’s been weird not being at the track.  Again, I would love to be competing with my guys.  We are obviously out of the Chase and all that stuff, but I’m not really concerned about that I just enjoyed what I was doing, enjoyed my job and have a great group of guys that believe in me as a driver.  It’s a difficult decision.”

…At what point can we move on with the Dale Jr. reports? Not all race fans despite what NASCAR and the media tell us are enamored with his every move.

The actions of Tony made me wonder about the dirt track incident.

That was exactly my thought at the time. You could see that it was an impulsive act of aggression with an intended result. Easy to make the connection. One that other professional race drivers quietly, off the record, made at the time.

Yes, because putting a bumper to someone is so closely related to running someone over with their race car. What an absolutely ridiculous comment.

That wasn’t “putting the bumper to someone” that implies just moving them out of the way. This was an obviously deliberate wrecking someone in a reflex action driven by a burst of anger.
Two totally different things.

Yes Russ. We all know that compares to hitting a human being that walks in front of your car. So was Nemechek trying to kill Custer this weekend? Ridiculous.

I’d answer #2 by saying that Darlington is still way the hell better than 3/4 of the tracks on the current schedule.

I got a kick out of seeing the stands full last night at the track that nearly lost all its dates a little over a decade ago while Indy was deserted, NuBristol was a ghost town, and the cookie cutters that “grew the sport” couldn’t give away tickets to fill the stands if they came with free hotcakes.

They are going to have to give Harvick a new pit crew after those blistering comments in post race interview. Who is going to want to work for him now? I would love to see HIM get in the pits and do what they do.