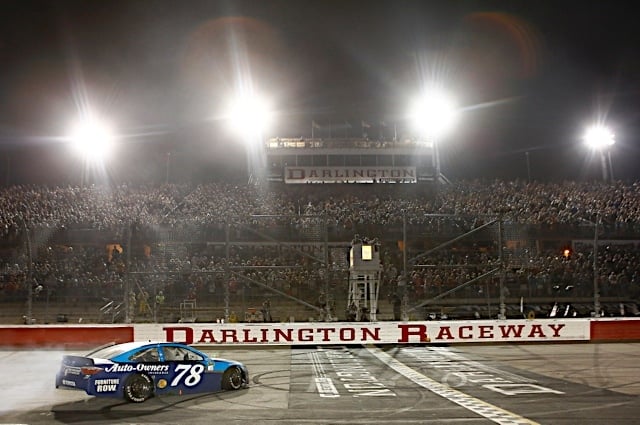 For Martin Truex, Jr., the term “go big or go home” has had significant meaning in 2016. Though he has had several races this year when he had a car capable of winning, Sunday night’s race in the Southern 500 at Darlington Raceway was only his second win of the season.

His other win? The Coca-Cola 600, where he led more miles than any other driver in any one single race in NASCAR history.

“Yeah, it’s been quite a weekend, quite a night,” Truex said. “You know, it’s just amazing to win a race like this.  I mean, the Southern 500 is just — you know, it’s one of the ones everybody wants to win. Coming in here this week, I knew we’d have a shot at it just based off the way we’ve been running this season, but to finally get it done and bring home the victory and go to victory lane here, it was a pretty amazing feeling.”

Truex certainly wasn’t the strongest car all night, however. He led only 28 laps all night, behind the totals of Kevin Harvick (214), Brad Keselowski (47), and Kyle Larson (45). However, some strong pit stops by the pit crew (a weakness of Harvick’s as of late) put the No. 78 car up front and Truex was able to take advantage of the clean air for his first career win at the track “Too Tough to Tame”.

“It’s funny, we’ve had the best car in a lot of races and not won, and tonight for the most part of the race, we didn’t have the best car,” Truex said.” So it’s definitely a sweet feeling to come to victory lane and be able to overcome that and make our car the best that we could at the end of the race and ultimately get the job done.”

The win couldn’t have come at a much better time. Next weekend at Richmond International Raceway is the regular season finale, the last race before the Chase begins. While Truex has been running well for much of the season, he certainly hadn’t been as much of a contender as he had been earlier in the season. That’s not to say that they were underperforming, but the dominance factor was missing. While Truex and his team certainly didn’t dominate Sunday night, they were in the top five for much of the race, and are hoping to carry that momentum right into the postseason.

“It’s been a good season,” Truex said. “It’s got potential to be a really great season. I think that based on the team we have and the way we’ve been running, I mean, we could honestly be sitting here with seven, eight, nine wins if things had gone a little different here and there.  But with that being said, we’ve got two, and I really feel like we’ve got a legitimate shot at this championship.”

“It’s been a good season, but it definitely could be a great season, and until Homestead is done and gone, we won’t know,” he continued. “Just looking forward to that opportunity to work with this team and trying to go after our first championship. We had a shot at it last year and didn’t really have the performance at the end of the season that we needed in our race cars, and I feel like this year with the speed we’ve had in our Toyotas that we can go to Homestead and really have a shot at this thing. So definitely focused on the Chase starting, and hopefully be able to put those results together and make it to that Final Four again.”

The win gives Toyota 12 race wins in the 25 events so far this season, and it’s unlikely that it will be the manufacturer’s last. For Truex, the rest of the season certainly shows some true potential for him to earn his first Sprint Cup Series championship.

I got a chuckle when Kes put a little bumper nudge to Kyle. At the end or the race when they showed Kyle talking to Kes and the reaction of Kes I had to laugh. Kyle is lucky it wasn’t Curtis Turner or Lee Petty or a few more or he would have wound up like the 44.

How about Throwback Firecracker 400? Run it on July 4 starting at 10 am. Fans would like it and since Brian always listens to the fans it should be a go.