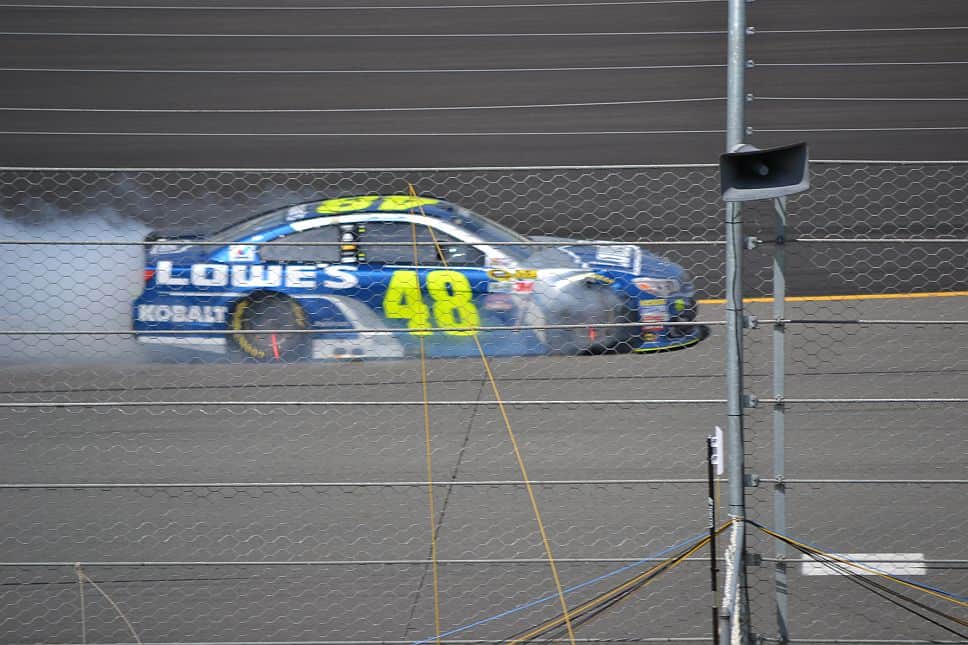 Did You Notice? … Hendrick Motorsports heads toward the Chase entering uncharted territory? Just one of its drivers sits inside the top 10 in the season standings: Chase Elliott in 10th. Only one of its drivers, Jimmie Johnson, has clinched a spot in the postseason field. Barring some bizarre circumstances, Elliott should join too but going 2-for-4 would still be the lowest Chase ratio for HMS since 2010.

Should Elliott miss? It would be the worst performance for HMS since 2005, the second year of the Chase. Only Johnson made the postseason then and he remains the best hope for a title; however, Johnson’s ten top-10 finishes are easily a career low through 25 races. Since his career low is 20 it’s almost certain the No. 48 team will fall short barring a miracle comeback.

Hendrick also has an impressive streak of running inside the top 10 in points. Since the program’s inception in 1984, when Geoffrey Bodine ran ninth in the season standings they’ve had at least one driver 10th or better in the final standings. No other major team out there can say that: not Gibbs. Not Penske. Not Richard Childress.

But the rollercoaster seasons of both Elliott and Johnson put that streak in serious jeopardy. One of the strongest Chase fields in years puts them at a disadvantage and keep in mind any driver who doesn’t make the Final Four, regardless of what round they’re eliminated can finish as low as 16th in the standings. It’s hard to believe we’re saying such things about a program that, three years ago earned its sixth title trophy with Johnson and eleventh overall in the sport.

Did You Notice? … The ratings for NASCAR’s “Big Four” races, the ones that used to comprise its Winston Million dollar bonus declined significantly this season? These events are still labeled crown jewels in the eyes of drivers and teams but have faded a bit when it comes to their television audiences.

While the Southern 500 was up against strong college football competition Sunday night (Notre Dame – Texas, a game which delivered a 7.0 rating) NASCAR can’t be pleased with what they’re seeing, especially since Darlington was heavily hyped as a “Throwback Weekend” critics deemed successful on the track and off. The downturn at Daytona happened despite a successful speedway renovation unveiled this February, selling out the track in advance of the 500 with amenities well received by those in attendance.

It’s away from the stands, then where viewership has suffered. Has this foursome truly lost its luster in the face of NASCAR pounding the drum on its 10-race Chase for the Championship? Whatever the reason, NASCAR’s next title sponsor would be well served to focus on elevating these “old school” events to the point fans can enjoy the drama the old Winston Million used to employ. The old rules were simple: win two of the four races above and earn yourself a $100,000 bonus courtesy former NASCAR sponsor Winston Cigarettes. Win all three? Take home a $1 million bonus, a prize won just twice (Bill Elliott, 1985 and Jeff Gordon, 1997) during the program’s initial history.

What would have happened if the bonus were in play this season? Truex would have won $100,000 for victories at both Darlington and the Coke 600 back in May. Two of the night’s other top contenders, Denny Hamlin and Brad Keselowski would have also had a little extra incentive to go for broke. This finish Sunday night would have also added focus to February’s Daytona 500, a race Truex lost by inches to Hamlin in a move which (under these rules) would been the difference in winning an extra $900,000.

At one point, Sprint toyed with a $1 million summer bonus idea but never really implemented one that worked during their tenure as NASCAR title sponsor. The Chase was their major sponsorship stamp on the sport; will the new title sponsor try a different approach? Big moments can still draw big audiences.

Take the Brickyard 400 this year as an example, a race that pulled an increase in viewership despite a dominant, boring performance by Kyle Busch. Why? The race was deemed Jeff Gordon’s comeback after Dale Earnhardt, Jr. was forced to sit out due to concussion symptoms. If a big name can bring fans back to the television set there’s no reason big prizes wouldn’t, either.

Has anyone noticed that with the increased cameras in the pits, Johnson and Chad have not been doing very well.
They were caught Sunday trying to modify the body of Johnsons car. How many times did Chad get away with cheating during Johnsons 6 time championships?? The survillance by nascar was lacking during Johnsons
chanpionship runs. No where as dominant now. Just wondering..

Really? You think big prize money will bring fans back? The winner of the all-star race gets a million dollars for winning that one race. Yet that does nothing to increase ratings. So why would you think fans would flock to the tv for one driver to have a snowball’s chance of winning a million if they can win the 3rd race in the series? Get real.

I believe it is way too late to fix things but if they get desperate enough and want to take a shot in hell, they should take a page out of Coca Cola’s book, and get rid of the damn chase and all the other gimmicks. What do they have to lose (except for Brian’s ego)? Although I seriously doubt it would help at this point. Too many fans have been alienated and they aren’t coming back.

Face it….the hype for the ridiculous 10 race ‘not-a-playoff’ chase has taken most of the luster from the first 26 races of the season. Brilliant idea to make the majority of the season pointless, and relegate 60% of the field as totally irrelevant for the final 10 races. Not only will Nascar never compete with the NFL in the fall, but they actually succeeded in draining the meaning out of most of the season. Way to go.

Why cheer and get excited, why watch? It is pretty much meaningless, other than padding stats for drivers and giving the media something to write about as if it means something. The welfare restart starts soon and all are equal, and then 9 races later, another welfare reset and the luckiest one of the one race is the CHAMP, (unless they are top or damn close to the old points system) And NO…P22 (Kyle Busch last year on the old points system) does not count and is a horror of travesty as a “Champ”.

yeah, so Darlington wasn’t a TV ratings juggernaut. What made this race fan smile was all those seats filled in the grandstands! Harkens to the days of yesteryear when those diehard race fans of the South sold most tracks out! Give the fans a throwback, remind them of the old days and what do you know? they came out to the race! What a concept. I have to give kuddos to both Darlington and Nascar for that one.

I was at Darlington last week, what a wonderful facility. Everyone involved did a great job of bringing the race back to Labor Day weekend and embracing history with the “throwback” weekend. The tropical storm rained out Friday, but the museum was still open and I got to see some wonderful NASCAR history. It was an easy experience with traffic and parking. The racing was great on both days too. This one needs to be on your “bucket list”.

Sounds great and look great. What fun! . Glad you and others had a great experience. They get the Gold Star for fan appreciation and effort!