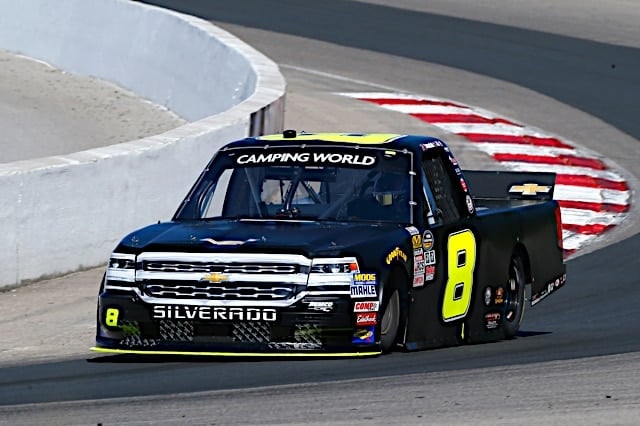 Nobody ever said that Canadian Tire Motorsport Park doesn’t disappoint.

Four years, four crazy finishes, three last-corner passes for the win. And last weekend’s finish between Cole Custer and John Hunter Nemechek was perhaps the craziest of them all.

Custer, leading on the last lap and needing a win to qualify for the inaugural Camping World Truck Series Chase, had the lead going into the final corner when Nemechek put the bumper the back of Custer’s No. 00 Chevrolet. Nine seconds and a grassy drag race to the stripe later, Nemechek crossed the line first.

Considering the nature of the pass, and NASCAR’s wait of about five minutes to confirm the No. 8 as the winner, many, including the broadcasters, were left wondering whether NASCAR was considering disqualifying Nemechek for the move. It wasn’t without precedent. NASCAR once stripped a win from Ricky Rudd for a move they deemed dirty at Sonoma; could Nemechek have been the next winner to be stripped of the victory?

He wasn’t, and while Custer tackled the winner on the frontstretch, many took to social media decrying Nemechek. He chalked it up to hard racing, saying he didn’t wreck Custer. While that might be a stretch – multiple torn up trucks is the definition of a wreck – one could make the case that the wreck wasn’t intentional.

Either way, Nemechek made an aggressive move on the final lap. Should he have done so?

Simply put, John Hunter Nemechek’s decision to pin Cole Custer against the wall in the grass for a win wasn’t a wise one, though it was well within the rules.

Look, I’m all for beating and banging for a win, especially for a driver with little funding where a win can make the difference between continuing to race and being sidelined. After all that’s the kind of excitement that keeps people watching, but the lasting effects for Nemechek are likely to be far-reaching.

First of all, you can bet that if Custer can’t manage to win at Chicagoland Speedway and secure himself in the Chase, he’ll do what he can to make it difficult for Nemechek to win the championship. Whether Custer would go the route of what Matt Kenseth did to Joey Logano last season remains to be seen, but there are plenty of subtle ways he can make Nemechek’s championship trek difficult during the final seven races.

From extra blocking throughout the field, making it difficult for Nemechek to make up ground in a timely manner to even well-placed contact at a track like Martinsville, where most wrecks can be passed off as racing incidents, Custer does have options for being the one to spoil what could turn out to be a much-needed championship for Nemechek and his NEMCO Motorsports team. In fact, Kyle Larson even tweeted that he “hopes” it would happen in some way.

Hey @JHNemechek that was not big picture racing there. Hope the 00 makes your life trouble in the chase….

But perhaps the larger concern for Nemechek is the loss of respect throughout the racing community. Long known as the soft-spoken, polite kid in the NASCAR garage, the 19-year-old was the subject of criticism from several drivers, fans and media.

MT just said it best. He may have crossed the line first but he isn't a winner. Total disrespect. ?

Sometimes respect is better than a trophy… Maybe somebody will learn that very soon.

There might be a reason @JHNemechek has no sponsor! I'm all for hard racing for win but not even close! Feel so bad for @colecuster00 #fb

Not that I haven't roughed a few up in my career but that was pretty ??

Perhaps the most obvious came from 2014 winner Ryan Blaney.

Not that hard to pass someone clean in that corner bud.

In case you’re not sure exactly what Blaney is referring to, he made a last-lap pass for the win over German Quiroga in 2013.

Is it likely Nemechek’s move would have been received differently if the roles were reversed? Probably. Staring down the barrel of two races remaining and in need of a victory to secure a Chase spot, the same people currently criticizing Nemechek would likely have been cheering Custer if he had done the same thing. After all, who doesn’t love a story where a driver makes something happen in one of the last possible moments?

The bottom line, though, is that, while there wasn’t necessarily something wrong with Nemechek’s choice to drive Custer straight into the guardrail and pin him there for the win, it may not have been the smartest move for the driver looking to gain more sponsorship and potentially move up to the XFINITY Series or beyond in the next few season.

After all, behind money, respect is key in NASCAR if you want to find long-term success.

HE AIN’T THE INTIMIDATOR, BUT…

I have the gift (or curse, depending on how you look at it) of seeing things from both sides. So I’m the perfect person to write this side of the argument. And while I too wanted to take to social media to rant about the finish, I refrained. And a few hours later, I’m glad I did. Because Nemechek’s move — while aggressive, bold, and perhaps poorly thought out — was, like Beth mentioned, well within the rules.

And perhaps not as dirty as everyone made it out to be — kicked up grass notwithstanding.

Nemechek’s move wasn’t all that different from what Chase Elliott pulled on Ty Dillon a couple of years back:

But while Elliott flat-out dumped Dillon, Nemechek hit Custer more squarely. Custer drove the truck as best he could, but with another truck pushing him, wasn’t able to straighten it out until Nemechek turned right. That’s a fine move — Gordon’s made it, Earnhardt’s made it, Busch’s made it. It’s what happened after that got everybody fired up.

Upon a second (and third) look, however, I’m not sure if you can definitively say that Nemechek proceeded to purposefully pin Custer against the wall. Once the two separated, before they went into the grass, Nemechek put the pedal down. There wasn’t enough grip with that amount of power. And that, combined with impatience, poor car control, adrenaline, whatever … caused his truck to kick out sideways and into Custer.

From there, the two were along for the ride, both pressing the gas as hard as they could, both trying to outdrive the other to the line. Beating and banging has worked before – Sprint Cup was racing later that night at a track with perhaps the best example of that in the sport’s history (see: Ricky Craven and Kurt Busch). Two young guys trying to make a name for themselves probably figured that was their best shot at checkers. So they did it. And Nemechek came out on top.

Unfortunately for Nemechek, the move he made – a solid bump in the final corner – turned out to have more consequences than he thought. A bump turned into a chance for the win. That turned into a sliding truck, which turned into a thrilling finish with Custer. But it didn’t end there. Ridicule, fights, threats, the works – he probably won’t win the championship this season. Actions do have consequences, and he’ll have to live with his.

But his action was the right one. Racers live to win, and to not go for it would have been a bigger blight on Nemechek’s legacy than this whole brouhaha ever will. Should you join the Nemechek fan club because of this? No. Join if you like the kid, not because of one move.

But perhaps you shouldn’t write him off as a dirty racer either.

If you watch the replay close, you will see Cole simply stopped in the final corner. JHN had no choice but to move him in order to even get to the line. Where JHN crossed the proverbial driver code was slamming Cole into the wall coming to the checker.

Again, take another close look. JHN overreacted and thought Cole hit him, when in fact, John got loose downshifting to get more power. That is when John crossed the line and said F it, im winning this biotch. But, that is WHY we have fenders and other series’ do not.

John simply took this too far. However, Cole is no saint either here. He quit driving in the last 2 turns and looked in his mirror. Live by the sword, die by the sword.

That move by Nemechek went far beyond “moving” someone. That was even beyond dumping someone. It may have played well 20 years ago, but now people look down their nose at a sport that allows such actions. Of course die hard fans may not condeem it, but you wont attract new fans that way.

I thought JHN went way over the line. But it was entertaining in a train wreck sort of way.

and he went waaaay past rubbin. From before the time Custer hit the wall he should have gotten off of him.

A real chicken shit move. Maybe he should think about a figure 8 career. Had I been the race director, I would have
dis qualified him in about ten seconds.

It was clearly a dirty move, JH turned left and stayed left to keep him in the wall. POS move, fan of his dad but won’t follow that kid anymore.

“Nobody ever said that Canadian Tire Motorsport Park doesn’t disappoint.”

It implies Mosport does.

How about: Everybody says that Canadian Tire Motorsport Park doesn’t disappoint.

Or: Nobody ever said that Canadian Tire Motorsport Park disappoints.

Don’t you love when the “girlfriends” get into the discussion. Shut up Sherry. Jesus…really?

I think the tweets from the racing community say all that is necessary. Us couch spuds get an opinion but we won’t have the opportunity to dump little John Hunter’s ass anytime soon.