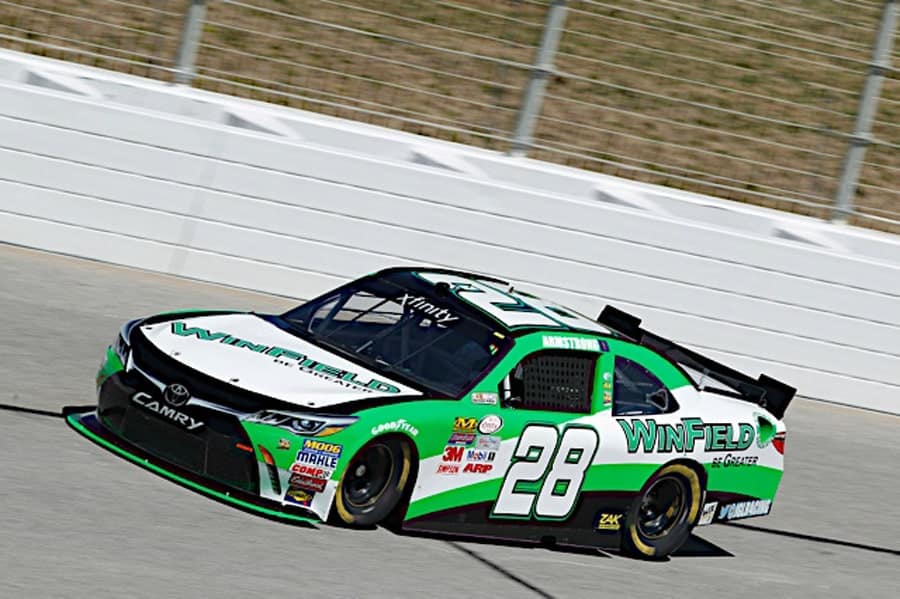 For the next two weeks, Dakoda Armstrong will have a lot more eyes on him than usual.

It may be hard, generally speaking, for a professional race car driver to escape the spotlight.  Armstrong, however, has managed to do just that, piecing together a very nondescript season full of thoroughly average finishes.  Although he hovered near the Chase cutoff early in the season, Armstrong was never quite in the conversation of serious Chase contenders.  His lack of top-10 finishes kept him from claiming a spot in the top 12, while his lack of bad finishes prevented him from ever dropping completely out of the picture.  Still, Armstrong’s Chase chances for much of this year seemed pretty remote.

Toward the end of July, however, Armstrong landed a big opportunity.  Joe Gibbs Racing needed a driver to substitute for Matt Tifft at Iowa Speedway, and Armstrong got the call.  His fifth-place finish in that race is still his lone top 10 on the year, but it did elevate him back into the Chase conversation.

So now, with two races to go, Armstrong has another big opportunity.  A few up and down races for Jeremy Clements and Ross Chastain have left Armstrong as the first driver outside the Chase cutoff.  To get in, he needs to make up 18 points on 12th place Ryan Sieg this weekend at Richmond and next weekend at Chicagoland.  While it is certainly possible to make up those points in the allotted time, Armstrong cannot count on Sieg or Blake Koch, who is 22 points ahead of Armstrong, having a bad day.  It will be up to Armstrong to close the points gap, and he will have to do it with JGL Racing.

In looking at the big picture, the next two races have the potential to be a turning point in Armstrong’s career.  In the midst of his third NXS season, following two years in the Camping World Truck Series, he has not produced the kind of results that make people jump up and take notice.  With only five top 10s in 97 XFINITY starts, Armstrong’s name is not one that gets tossed around a lot as a future star of NASCAR.  On the other hand, his career likely is not in danger as long as he maintains a good relationship with sponsor WinField.  The agricultural company’s logos have adorned Armstrong’s cars since 2013, and drivers with stable backing from sponsors tend to be a hot commodity in most forms of racing.

Armstrong has carved out a place for himself in NASCAR.  He can survive as a professional auto racer, which is a lot farther than many other drivers make it.  But can he thrive in NASCAR?  Is he really a guy who can deliver wins and championships to an XFINITY team?  His current results suggest that the answer is no, but in fairness to Armstrong, nobody knows for sure how well he would run with a well-funded team.

Early in his XFINITY career, Armstrong ran a handful of races for Richard Childress Racing.  Most of those races resulted in finishes in the teens.  He then spent the last two seasons driving for Richard Petty Motorsports’ NXS team, but there’s doubt about whether the organization can be considered well-funded.  RPM’s XFINITY team probably had a bigger budget than JGL does, considering that it is a Sprint Cup team.  Yet it is telling that when RPM’s sponsor could not pay the team earlier this year, the entire operation shut down, ending Jeb Burton’s Chase run.  That is not the sign of a team on solid financial footing.

Burton’s loss is potentially Armstrong’s gain.  If he can make up enough ground on the current Chasers in the next two weeks, his Chase performance could lead to a long-term deal with a top XFINITY team.  Team owners would have more concrete proof about Armstrong’s capabilities behind the wheel. At the very least, Armstrong could be more than just another guy who will bring in a sponsor and the car home in one piece.  The opportunity is there, but it is up to Armstrong to take it.