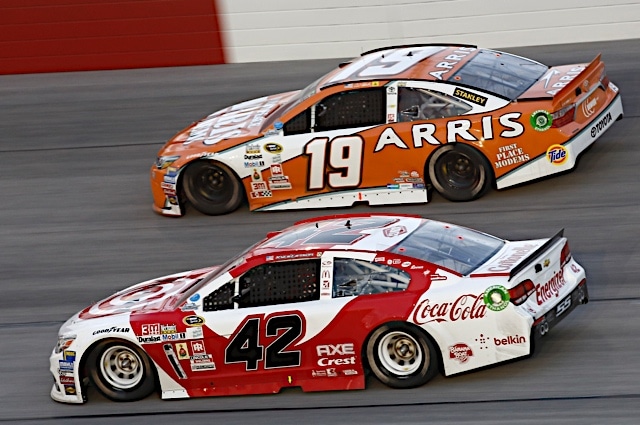 The ratings are in for the Southern 500 and, well, thy’re a bit on the disappointing side.  That’s right, the much-ballyhooed throwback extravaganza didn’t quite pull the numbers that the wonks in Daytona may have expected.  Last year the race held a 3.7 share of viewership, while this year it fell all the way down to 2.6,  By way of comparison, the Texas-Notre Dame college football game hit a high-water mark of 7.0

Once again, NASCAR is doomed.  Or not.  Or it is.  Perhaps a few things are best to keep in mind here.  For starters, ESPN put all they could into making this first weekend of the college football season one of the most competitive and intriguing ones ever.  Previous seasons have often showcased a couple marquee games with a smattering of powerhouses playing Directional Tech University in a glorified tune-up for the mega team.  In contrast, this weekend actually featured a number of, holy crap, watchable games – and that means watchable for a casual fan not just a fan (or hater) of a particular school.

But the Cup race faced only one staunch opponent!  Indeed.  And if that game hadn’t happened to turn out relatively interesting, perhaps more casual NASCAR fans may have tuned in.  Of course, these arguments and criticisms are just a way to level the notion that the sport continues its downward spiral.  Yep, the tent is folding up at the end of the year, no need to look for the sport in February.

Pshaw.  The 2.6 rating is low and a bit disappointing, but be kind and remember that it means that around 4.5 million people still watched.  Then consider that NBC hasn’t announced how many people may have watched the race through its online platform.  The numbers behind online viewership continue to grow for nearly all sports – why would NASCAR be any different?

Happiness Is…Age.  One of the fun things about having younger drivers competing is that bring a different attitude and aggression to the track that their elder, wisened, more composed competitors may.  Well, ok, sometimes yes, sometimes no.  This weekend held two prime examples of the silliness that can manifest itself at any given moment on a racetrack.  The most obvious depiction of racing asininity is the battle between Cole Custer and John Hunter Nemechek that has been played out to near ubiquity.  That being noted, the Camping World Truck series does not exist as a ratings juggernaut.  To have the highlights, or lowlights depending on your perspective, garner the attention they have it encourage viewership in the series.

The flipside, however, is that the crown jewel of the NASCAR weekend featured Tony Stewart proving that he still can show questionable judgment.  While Custer and Nemechek may have been racing for the win, Stewart punting Brian Scott looked like a move made out of frustration, and surely something his lawyers can’t be happy to see as it may pertain to his civil case.  The overall aspect, however, is that the racing this weekend reinforced the notion that NASCAR is a contact sport.  From a happy perspective, great – and even better, the suits will likely be happy that people have something to talk about.

Happiness Is…Curtains.  This weekend is it.  It’s the final weekend of the regular season for the Cup drivers.  Of course, the fact that NASCAR did not have the Truck or XFINITY series regular season end at the same time is just another questionable aspect in their concept of scheduling.  But whatever.

Since Denny Hamlin locked himself into the Chase at the Daytona 500, this race is what everyone has hoped to make it to with the playoffs in mind.  Right now there are 13 drivers locked in, though Chris Buescher is in a tenuous position being just 10 points to the good of the 30th-in-points cut-off line.  So there’s either three or four drivers with a shot of making the Chase.

The big battle is between Jamie McMurray and Ryan Newman, but with Newman’s 15-point penalty from this past weekend, his task just became more onerous.  So this race might not have a supreme sense of drama as so much of the field is set, but it will be interesting to see which teams really show their proverbial cards after many of them have had oodles of races to basically test.  Time for things to get, let’s hope, interesting.

Happiness Is…Change.  Something is happening in Formula 1 that is causing many fans to rejoice.  The simple gist is that the management aspect, or controlling party, of the sport is being sold – to the lofty sum of $8.5 billion.  The Dallas Cowboys are only worth $2 billion or so, which means F1 and its position as a global motorsport is entrenched as a true power.  The ownership change, as John Malone and Liberty Media begin their takeover, means that an American company will be overseeing the sport and will be looking to further maximize its profits.

No, it’s not likely that Malone will push for a Chase.  With Bernie Ecclestone staying on for three more years, he’ll still be shepherding the sport during this transition period.  This change is a fascinating one to watch from a NASCAR fan’s perspective.  It serves as a ‘what it’.  What if everyone’s favorite NASCAR honcho Brian Z. France made a similar move and sold the sport?  Fans would cry out in joy in the short term but that would be because losing France, to most, would be addition by subtraction.  But what would happen?  How would the sport change?  Or not change?  Watching how F1 moves forward will give some of concept of how an outside management company would seek to maximize its revenue, with the overall question being whether or not said company would give the fans what they want.

Forgive me…what the hell are you talking about Rockingham?

Maybe it was supposed to be Richmond and the tracks were mixed up. I can understand why. It should be Rockingham. Excellent editors.

It would be interesting to know the online numbers for Darlington as well as what the trend line looks like. However I suspect that college football saw the same trends. So the bar probably didn’t move. Regardless, I think the results show that while last years throwback race was nice, it was a novelty. Like a sequel of a movie its never as good as the original.

Liberty Media purchasing F1 will hopefully mean some positive changes. I suspect you will see another race in the US and maybe some other changes particularly online. But in the end they like CVC will be looking to maximize the profits for themselves. If that happens to improve the sport at the same time, oh happy days.

Finally, I think that one how much longer the truck series can be considered relevant? If Sprint Cup is declining the trucks barely have a pulse. I expect they will have to make change soon.