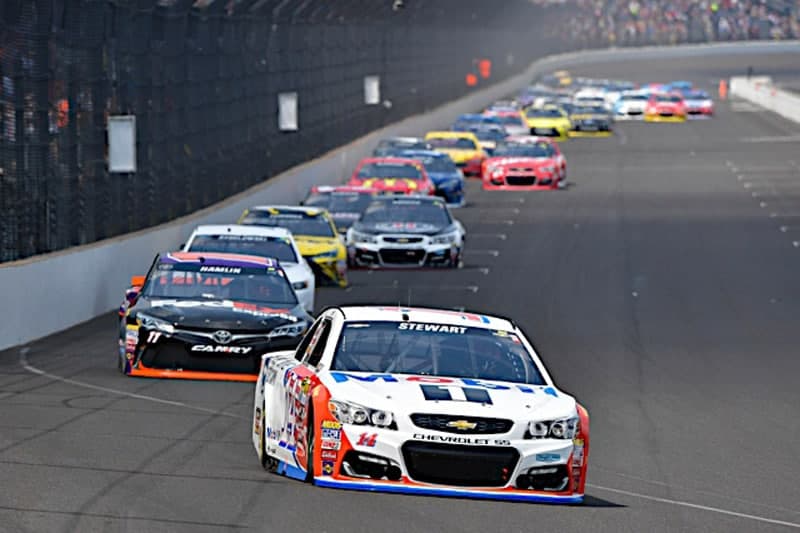 On Wednesday, NASCAR handed down a bunch of penalties, as it generally does on a weekly basis.

Most weeks, the penalties are minor: written warnings for going through inspection too many times, maybe a loss of pit choice.  Every once in a while, though, the sanctioning body hands down something bigger, as happened this week with Ryan Newman and Kyle Larson after failing inspection postrace at Darlington Speedway.  Ryan Blaney also got a fine that raised a few eyebrows: $1,000 for not wearing fireproof gloves during a practice run at Darlington.

But what came as the biggest surprise was what NASCAR didn’t do.

Noticeably absent from the infraction sheet was any penalty for Camping World Truck Series driver Cole Custer, who put a flying tackle on John Hunter Nemechek after Nemechek put Custer’s truck in the wall coming to the checkers Sunday at Canadian Tire Motorsport Park.

It was actually less of a surprise that Nemechek wasn’t penalized for his actions (he was given a written warning for an unrelated violation), as NASCAR hasn’t penalized for similar actions in many years (there is precedent; NASCAR did strip a win from Ricky Rudd for what it deemed dirty driving, but that was before Nemechek was even born).

It’s safe to say that there were some double takes Wednesday, because CWTS drivers Spencer Gallagher and John Wes Townley got hefty fines and probation for an on-track fight during a race at Gateway Motorsports Park in June, so many fans probably assumed that Custer would get the same.

But he didn’t, and that’s where the disconnect between the sanctioning body and the sport’s fans became apparent.

While the two situations were not exactly the same by any means, they were similar enough that many fans were rightfully confused by NASCAR’s lack of action this time around.  As a result, at best fans were wondering at NASCAR’s inconsistency, and at worst outright accusing the sanctioning body of favoritism because Custer drivers for a team owned by perennial Cup Series Most Popular Driver Dale Earnhardt, Jr.

Given the information that NASCAR gave, the questions are understandable. The two situations simply didn’t look different enough to most viewers for the drivers not to receive the same treatment.

The thing is, the questions are legit. NASCAR could have given an explanation as to why no action was taken, but it didn’t, leaving fans to guess at its motives. It’s not the first time NASCAR has made vastly different calls on physical altercations; in 2014 Marcos Ambrose and Casey Mears were penalized for a postrace altercation while later in the season, Brad Keselowski and Jeff Gordon were not.

In both cases, 2014 and 2016, the situations were slightly different, but not different enough for fans to understand the lack of consistency in penalties.  Perception is reality, and the perception was that NASCAR was playing favorites. And while NASCAR denies that, it would have been easy to diffuse it by simply explaining exactly how the situations warranted different actions.  Sure, there would have been naysayers, but at least the information would have been clear to all.

It’s not limited to driver behavior. Remember in 2012, when Hendrick Motorsports was penalized heavily for a body violation on the No. 48 when an inspector said the car’s C-post didn’t look right in opening inspection? The penalty was later drastically reduced (and many cried foul on that). But many fans wondered why the penalties were so hefty in the first place when a few months earlier the No. 18 car had a C-post that didn’t look right in opening inspection and the team was told to go back and fix it and present the car again, with no further issues.

Did NASCAR tell teams at that time that the next team with a similar issue would be issued fines and suspensions? Maybe they were, and fans didn’t know. Maybe they weren’t.  Was the No. 48 C-post manipulated to a greater degree than the No. 18’s?Maybe it was.  Maybe they were exactly the same.  Did NASCAR view Custer’s move on Nemechek as justified after Nemechek’s last-lap driving? Maybe. Maybe not.

And that’s the real issue.

The problem then and now wasn’t necessarily the difference in penalties.  It’s that nobody explained to the fans in the stands why the penalties were different for what many of them perceived to be the the same violations. Had NASCAR given a short statement about their decisions in these cases and others, it might have saved a lot of questions about the sanctioning body’s motivation and integrity.

Perception is reality, and if fans perceive that NASCAR is inconsistent, then it has a consistency issue.  Fans are paying attention to every move, and NASCAR should recognize that and be sure to include them in some of the whys and what-fors.

When it doesn’t, the sport’s credibility suffers, and that’s not good for anybody.

Yes Ammmeeeee, the big surprise is what NASCAR DIDN’T DO!!!!

Tony Stewart’s insane unprovoked mentally unstable move on Brian Scott, at the expense to RPM. But hey, it is the Little Buddha Belly so many worship with his nutty instability, and angered outbursts! The Little Buddha worshipers so often say “That’s Tony”…as if his outbursts and anger issues are “endearing and cute”! Glad when he is gone and the media hubris defending him or not acknowledging just bad behavior and having excuses or silence at the ready will cease, as he will not be in a race car in Cup.

…..And yes Ammmmeeeeee, NASCAR is wildly inconsistent, but what do us peons know?

…..And reading as the “journalists” continue their march from lasts weeks events to this week all but IGNORING Tony Stewart’s unstable breakdown deliberately causing the wreck of Brian Scott and expense to RPM. SHAMEFUL, not a one in the expansive universe known as the internet or print has said a damn word! I looked.

What we expect is the media to treat him not as a God and immune, but have the journalistic integrity (do they teach that anymore?) to call it like it is! The silence on his actions (past and present) astound. The sooner he is off the track the better, my two cents!

It’s like a line from an early episode of Law And Order: It’s about the perception of impropriety.

Martin Truex passes while entering his pit box? Penalty. A tire rolls out of Truex’s box by less than an inch? Penalty. Joey Logano’s crew has an air hose so out in pit lane that Harvick has to drive over it and no penalty. Tony Stewart diliberately takes out Brian Scott. No Penalty. I still love NASCAR but they do have their favorites.