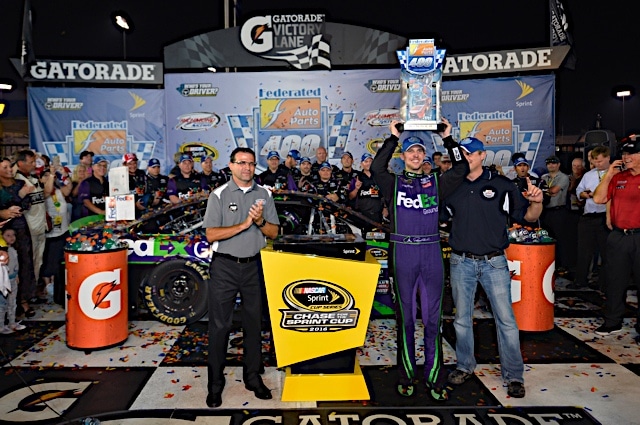 While Chip Ganassi Racing’s Kyle Larson was getting plenty of airtime for some bold moves late in the race and a recent hot streak, Jamie McMurray was quietly getting a top-10 finish of his own (he wound up seventh) and in doing so, made them one of three multi-car organizations to see each of its teams in the Chase (Joe Gibbs Racing and Team Penske being the others).

It’s the first time the Ganassi bunch has had two Chase-bound teams and while Larson has gotten the lion’s share of attention recently for his win at Michigan and aggressive drive for victory No. 2, McMurray has been consistently improving-his understated Richmond run was the kind of race that can move a driver forward in the Chase.  This year’s field is a tough one, but if McMurray can stay consistent, he does have a shot at the second round.

There was some good racing, there was some questionable racing and there were certainly plenty of crashes.  It’s too bad that it was all overshadowed by the Chase and all the who’s in, who’s out if the race ended right now (and it isn’t going to) talk during the broadcast.  If you weren’t already in the Chase, battling to get in the Chase or crashing someone in one of those two categories, well, you might as well have been invisible.

Yes, the Chase is coming.  Yes, some teams are going to get in and others are going to fall short, but there was a race going on that meant something on its own.  While the big picture is focused on the playoffs, each race also matters outside of the Chase.  Unfortunately, fans can probably expect more of the same for the next ten weeks—Chase contenders eating up the broadcast while others are barely an afterthought even if they’re performing well. That’s debatable journalism at best, but it’s what fans are going to get.

Denny Hamlin ran at the front early on, but at times didn’t look like he had anything for the No. 78 of Martin Truex, Jr., who ultimately led the most laps There were also enough others (the race featured 21 lead changes) making bids that Hamlin didn’t look like a lock until late in the game, when he led the final 89 laps to win at his hometown track.

Matt Kenseth was never quite as strong as teammate Hamlin, leading just three laps, but he was definitely in the mix for a top 5 for much of the night…until a flat tire sent him into the wall with just 65 laps remaining. Unlike some drivers who kissed the wall on Saturday night, Kenseth body slammed it, ending his night in 38th place. Kenseth limps into the Chase, the polar opposite of his teammate.

Richmond produced a wild race with a record number of cautions, and many of those came from one of two things: flat tires and short track racing.  In fact, many if not most of the tire issues came from contact on the track, not a bad tire (tires, overall, were excellent in that they did wear out and require constant management). It was not a Goodyear issue, it was racing incidents that caused much of the attrition on the night, and that’s not a bad thing.

Tempers did flare to the point of at least a couple of on-track incidents that were definitely not entirely accidental.  Incidents between Ricky Stenhouse, Jr. and Paul Menard and between Matt DiBenedetto and Casey Mears looked like there was more than a hint of emotion involved, and Tony Stewart and Ryan Newman bounced off each other a few times before triggering a multi-car crash which is one people will be talking about for all the wrong reasons. Newman, who needed a win to keep his Chase hopes alive, was driving aggressively, and tried two or there times to pinch Stewart down on the track, making contact with the No. 14 until Stewart decided he’d had enough and held his line, in the process getting into Newman and turning him.

Newman’s comments afterward gained a lot of attention after he eluded toward a sprint car accident Stewart was involved in in 2014 in which the other driver was struck and killed.  Newman called Stewart “bipolar” and said he should have retired already. Newman’s comments were largely uncalled for. Drivers have been using the chrome horn since the beginning of time, and Stewart was more patient in that situation than others might have been (DiBenedetto showed far less patience in the earlier incident and his move on Casey Mears was at least as blatant as Stewart’s).

Stewart took a lot of heat for an incident last week at Darlington as well where he appeared to intentionally spin Brian Scott after Scott, in a lapped car, held him up.  While that move was unquestionably dirty, to call extra attention to it simply because it was Stewart is a little silly; he was far from the first driver to let the frustration oust judgment and he’ll hardly be the last.

There were a couple of things at play.  One, Hamlin and his team made the right calls at the right time, and while other teams did absolutely the right thing by varying late tire and pit strategies, Hamlin’s was the right one for him and paid off.  But he also had great restarts when he needed to, the advantage of clean air (Yes, it still matters.  A lot.), and track position that kept him out of other people’s issues.  Those things combined were enough for Hamlin to take the checkers and roll into the Chase with a winner’s momentum.

How…does the Chase picture shake out?

Of course, a lot can change in just one race, let alone ten long weeks, but considering recent performance as well as past records at Chase tracks, here’s who I’m thinking going in is a final four possibility, who’s probably going to go deeper than the first round, and who is probably going to be concentrating on 2017 after Dover.

After the race at Darlington and the penalty to Newman, it was pretty clear to anyone with basic math skills that the chase was probably set and the probability of a shake-up was minimal. Yet those in the media kept building and hyping it up like that wasn’t the case and there was still some drama of who would make it. In the end there was no drama and the more the guys in the booth kept ringing that bell as the race wore on, the more insulting it was to fans with basic math skills.

As for Stewart, he isn’t the only driver that has lost his temper and intentionally wrecked someone, but he certainly has done it more than anyone else I can think of over the last 15 years. Using your car as a weapon to exact revenge or teach someone a lesson is not ever advisable, especially for someone that has a pending civil suit in the wings claiming that he used his car as a weapon to teach someone a lesson and someone got hurt. You’d think he’d try not to provide extra fuel for his detractors and accusers, but when you are a rage-aholic I guess you don’t always have control to keep your tendencies in check.

Gotta agree with Bill B. Stewart has an on-track reputation as hothead that has followed him for his entire career. Yes, he has a very respectable off-track reputation, but on-track he will always be remembered as an ill-tempered ass. I won’t miss him when he’s gone.

What is wrong with Newman saying he is “bipolar”? Newman isn’t a Dr., not qualified to make that his diagnosis official….but then again, do we really need a medical professional to tell us that something has always been “off” regarding his bigger than life outbursts. etc? I for one am very glad he will not be racing in NASCAR anymore. Go away loon. MTC.

Interesting Amy as to who you picked to go all the way, as wrong as most of your picks are. The first four eliminated will be Buescher, Keselowski, Logano (both courtesy of Kenseth), and McMurray. The second four eliminated will be Dillon, Elliott, Larson, and Stewart. Eliminated next will be Kurt Busch, Edwards (sacrificial Toyota/Gibbs lamb), Harvick, and Johnson. The final-4 will be an all Toyota affair with Kyle Busch, Hamlin, Kenseth, and Truex. Truex gets the Cup.

Ken, I cannot dispute your logic….sadly. And maybe another rain shortened race in the “round that counts” to get into “Homestead” if the opportunity for the crashing on purpose is not there! Does Phoenix come to mind? Jesus Joe prays for these things you know and the Lord and NASCAR hear his prayers. … How in God’s name with so much riding could they have called the race, sinful and moronic. The script last year was for Toys. Quid Pro Quo! NASCAR did not accommodate the lowering HP because the weak engines were blowing up because NASCAR felt bad! And Toyota did not dedicated all that money because they thought Daytona International Speedway needed an overhaul and they were happy just to have their name on a large portion of the grandstands!!!! No doubt this year as well. Classic points model rejects all doubt…but we know the sad story! Who knows maybe Marty Truex with 6 wins in a zillion races will be considered HOF material because of a manipulated race at Homestead, way to cheapen excellence on so many levels. Seems the sign of the everybody gets a trophy time!

I don’t think you can choose who will win the championship based on past performance. Nascar has set the precedent that anything goes, so the best driver may not win simply because he was taken out by another driver.

I’m wondering if after Tony heard Newman’s comment about the Ward incident, whether they are now still friends. That comment crossed the line.

I think Tony is leaving at the right time. The sisification of this country has finally hit Nascar due to all the crybabies in the field every week. I’m sure this and the idiotic Chase format are 2 of the big reasons for him leaving his full time seat (sorry haters but he won’t be retiring completely). He can now spend more of his time on real racing, and not to have to deal with the crybabies and all the contrived drama that is today’s Nascar.