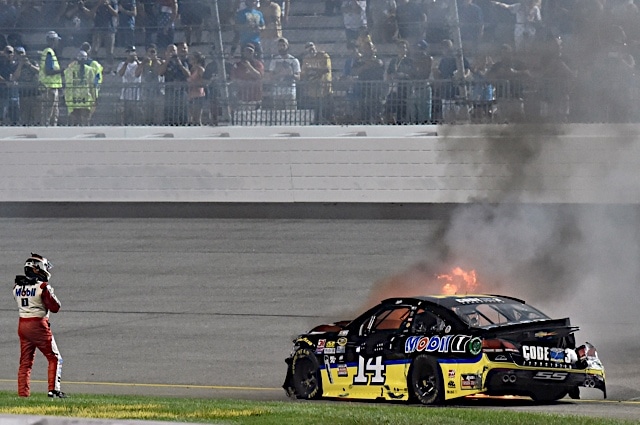 Who’s in the headline – Denny Hamlin started the regular season with a win at Daytona. He ended it with a win at Richmond. Martin Truex Jr. managed to be penalized on pit road again and potentially kill a winning effort. Kyle Larson got out of pit sequence but almost got back to the point on the green-white-checkered finish. Jamie McMurray managed to outdistance Ryan Newman to snag the last spot in the Chase.

What happened – Hamlin won the pole and led the first 50 laps, save a 2 lap stint during the first caution of the race. Truex passed Hamlin for the lead on lap 52, He led until Hamlin regained the lead under caution, on pit road, on lap 88. He led until the following restart when Truex assumed the top spot again and held it for 141 of the next 145 laps. An exchange of leads under caution and the a speeding exiting the pits penalty for Truex put him deep in the pack. Larson ended up a lap down at one point due to pit timing and cautions. His off sequence led to him being at the front with Hamlin while Truex fought back through the field. As laps wound down Truex made it back to the front but was on older tires. Hamlin led the last 86 laps, including the GWC, while Larson made a run over the final two laps with fresh tires. Ryan Newman was caught up in a wreck with Tony Stewart and Carl Edwards that ended his hopes for a miracle run back to the Chase.

Why you should care – Most of the common thought was that the Chase was set going into Richmond, but there is always the possibility of the Hail Mary win to upset the apple cart. In the end, Kasey Kahne was the only driver with a remote shot to make that happen late and that wasn’t very much of a shot at all. The field is set for the run to the title and it is now going to be interesting to see if Joe Gibbs Racing has been sandbagging.

– The Chase decides the winner of the title. Unfortunately for some drivers, the post race technical inspection process can prevent some drivers from having a shot at a title. NASCAR is trying to prevent that from happening. They are trying to come up with a policy that will prevent a situation where a post race infraction, that did not affect the finishing order or provide a competitive advantage, unfairly penalizes a title contender. That would seem counter to the premise that you need to be legal or you are penalized. This seems to be opening a Pandora’s box.

Following the Truck Series race in Canada last weekend, there were opinions galore about what should and should not happen with John Hunter Nemechek and Cole Custer. While Nemechek was penalized for illegal truck arms, nothing came of their post race brouhaha. It would appear that “Boys Have At It” is alive and well after that post race action north of the border.

After Harvick losing Darlington due to pit road miscues, he is going to receive the front tire team from Danica Patrick’s team. It seems like Harvick’s team always has issues on pit road, so it will be interesting if two new members can mesh with the existing team to provide stellar stops when they are needed most.

NASCAR still hasn’t announced a title sponsor for 2017. It would seem like they would have wanted to do that before the Chase, but it appears that all of the Is are not dotted nor Ts crossed. Most indications are pointing to some kind of co-sponsorship but we’ll have to wait and see.

Who is mad – Ryan Newman knew it was a longshot, but therer was still a chance when the green flag flew Saturday. Once he got together with Tony Stewart, that possibility went out the window. He already had to be ill thanks to his car failing post race laser inspection at Darlington. It is hard to imagine a car passing after the beating they take at Darlington. Newman and Stewart are friends but this will certainly strain that bond a little bit.

Ryan Blaney was another driver who was hoping to throw a successful Hail Mary on Saturday. Unfortunately for him that thought went out the window 12 laps in. A cut tire put him in the wall and ultimately behind the wall. While the team made it back out multiple laps down, any thoughts of sneaking into the Chase were dashed.

Carl Edwards seems to be the weakest link at JGR these days. While he’s won races, he’s not seemed to be a real threat most weeks for the last couple of months. The satellite operation of Furniture Row Racing has seemed more on point the last few races more than Edwards. The Chase can change everything and Carl has been through them before. We’ll wait and see just how far behind the No.19 is to the rest of the organization next week.

Who is happy – Jamie McMurray felt good going into Saturday night, knowing he was more than 20 points ahead of Newman for the last Chase spot.That said, he had to worry about a surprise winner messing up the deal. When Newman was in the big wreck and the lead five cars were all former winners, he had to breathe easier, but the checkered flag certainly had to make him breathe a sigh of relief.

It has been a pretty good couple of weeks for Michael McDowell. He scored the win at Elkhart Lake a couple weeks ago, then finished 12th on Saturday night. The No. 95 is rarely around the top 10 and hasn’t had a non-restrictor plate top 15 in ages. The run on Saturday is a huge win for the small team.

Larson may have come up a spot short on Saturday but the No. 42 team has been in the mix for several weeks. With a championship format that rewards hot teams, don’t be surprised if Larson is in the hunt in Homestead.

Hamlin’s triumph was his third of his career at Richmond International Raceway.

Larson has five career seconds,which ties him with several drivers for 84th on the all-time list.

Martin Truex Jr. finished in the third position for the fourth top 3 run of the season and second in two weeks.

Truex has one top 3 effort in his career at Richmond.

His podium finish was his 27th of his career. That ranks tied for 69th on the all-time list with Kyle Petty.

Chase Elliott finished 19th to claim the Rookie of the Race honors.

Elliott and Chris Buescher both made the Chase. They are the first rookies to make the Chase since Hamlin did it in 2006.

The 16 contenders for the title and their point total after the reset:

What is in the cooler -Richmond was the go to track on the circuit for years if you wanted great racing. It had two full grooves and provided tons of side-by-side racing. The Goodyear folks tried multi-zone tires and other options that have all failed. The racing for most of Saturday was single file and boring. The final 100 laps salvaged the race but it still wasn’t spectacular. The drama and Stewart excitement added some spice but it was far from a barn burner. We’ll give it four cold Legend Lagers from the Legend Brewing Company.

Where do you point your DVR for next week – The playoffs start on Sunday, September 18th at 2:30 PM at Chicagoland Speedway. The racing can be seen on NBCSN. It can also be streamed on NBCSports LiveExtra. You can hear the race on MRN affiliates or SiriusXM NASCAR Channel 90.

Lost in the Newman/Stewart dust-up was how convenient it was that the 38 car suddenly developed brake trouble early Saturday night.
The worst thing about series co-sponsorship is that now we could see companies in two different market segments precluded from sponsoring cars.

I give that race 1 warm can of pizzwater beer. Any race that allows so many cars that were lapped to get back on the lead lap (multiple wave-arounds in some cases) won’t ever get my vote as a good race. Nothing pisses me off more than watching the first 2 hours of a race and having everything that happened during that period be rendered meaningless. It makes me feel like a fool for not just tuning in for the last hour. That race exemplified everything wrong with NASCAR today including the points reset at the end for the stupid chase.

You fail to appreciate the beauty of 15 cars on the lead lap at halfway becoming 30 with 40 to go.
OK, I don’t either.

So Tony cuts in front of a driver numerous times and gets angry when he’s spun. Sound familiar? At least he didn’t call the other driver dirty. The disease is running rampant and there will be one less patient next year.

Why doesn’t Kyle have Busch beer as a sponsor? It seems natural. My brother and I were discussing it and came to the conclusion that their brain trust is smarter than the average beer.

After watching Tony’s performance the last two races anyone want to revise their opinion on the Kevin Ward incident. I’m not saying Tony intentionally ran over Kevin Ward but to not realize that Fat Tony was trying to big time him by spraying him with clay is absurd.

Sometimes I think that Kyle and Tony’s numbers match their IQs.

The Kevin Ward incident is in the past and it was kinda low of Newman to reference it in his post-race comments but I understand why he was mad … Stewart is never wrong in his opinion but it looked like to me that Stewart crept down and cut off Newman’s lane multiple times instead of Stewart’s contention that Newman ran into him. And if Newman did run into Stewart what would you expect … he’s in the way a lot and is lucky he is even in the Chase.

Dale Sr. wrecked people his whole career and NASCAR let him get away with it,so the more things change, the more they stay the same.

Tell Kevin Wards parents “its in the past”