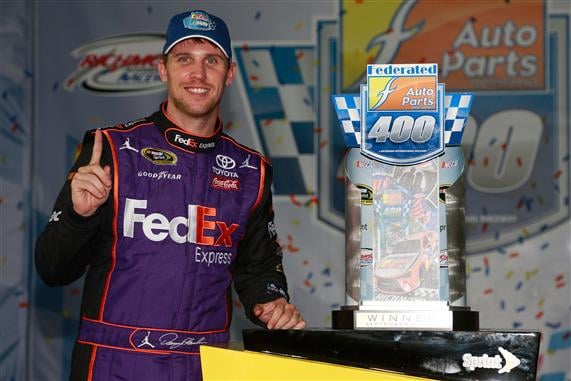 Even with an extremely close finish in the season opening Daytona 500 between eventual winner Denny Hamlin and runner-up Martin Truex Jr., no one could have possibly predicted just how dominant Toyota would be at the end of the regular season.

After 26 races and with only 10 remaining to determine the champion in the Chase, the Toyota teams of Furniture Row Racing and Joe Gibbs Racing – who actually share an alliance – have combined for half of those race wins.

The record books will show three career wins at this point in the season for Hamlin, including last Saturday night in the regular season finale in Richmond, but an overview of his results paint a slightly different picture. After winning the season-opener in Daytona, Hamlin didn’t make it to Victory Lane again until the race at Watkins Glen International in August. Between those two victories, Hamlin had eight finishes outside of the top 15 and led only 78 laps. By comparison, Hamlin led 95 laps in the Daytona 500 and 189 in last weekend’s race in Richmond.

While his statistics certainly weren’t terrible, he certainly seemed to be the caboose of the FRR and JGR train. In fairness, the bar was set extremely high, so Hamlin’s statistics may have looked strong compared to other teams.

Even with that being the case, Hamlin’s crew chief Mike Wheeler acknowledged the team had some struggles.

“I will admit, after we got the win, I was in R&D mode for a bit, like I got this crazy idea, let’s try it,” said Wheeler post-race. “A couple of them worked, three or four of them were failures.  But honestly, once we got down in points, I was a little embarrassed.  Really made sure to get everybody together and run into the Chase strong.”

Now, Hamlin will start the Chase next weekend in Chicago with bonus points from the three victories. While the No. 11 team is starting with some definite momentum on their side, Hamlin certainly isn’t planning on resting on his laurels.

“I think that any one of these guys can get going,” said Hamlin. “You don’t know what they’ve got at the shop waiting to come to the racetrack. I think it’s really hard to predict what happens from this point on. I mean, is it a continuation of the regular season or has somebody been laying in the weeds?”

There are a few drivers in particular he is keeping an eye out for.

“I think obviously Larson has really stepped up his game over the last month or so,” Hamlin continued. “So I don’t know. I mean, obviously the No. 4 car’s got great speed week in, week out.  So he’s definitely going to be a challenge, no doubt about it. The No. 42. You just don’t know. The 24 went on a run for about a month, as well. So, like I say, until you get to Chicago, look at practice, look at how the first race goes, that’s to me the barometer of where we’re really at.”

Regardless of how well or by how much the other teams step up their game, it still seems obvious that they are going to have to go through Hamlin and the other Toyotas to win the championship. While the No. 11 team is certainly aware of this, they also have to somewhat assume the mentality that they are racing from behind. With the points reset that happened last Saturday night, there are only 12 points separating the top seed from the bottom seed. Starting this weekend in Chicago, there is no playing defense – for Hamlin or anyone else.