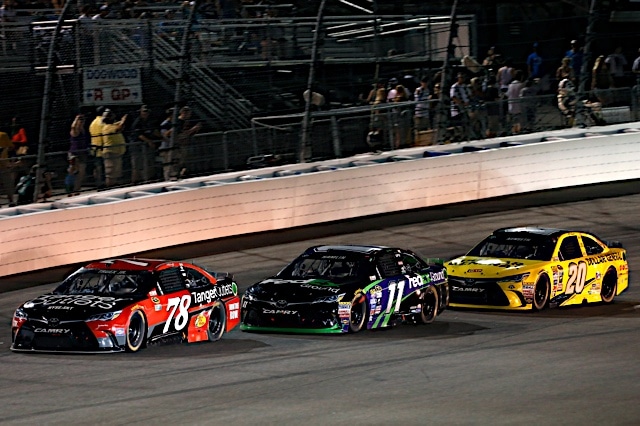 “Playoffs? Don’t talk about—playoffs?! You kidding me? Playoffs?! I just hope we can win a game!”

So former coach Jim Mora said when his Indianapolis Colts limped out to a 4-6 record to begin the 2001 NFL season.

Unfortunately for Mora, his Colts would only win two more games that season. He was ultimately fired, and replaced by Tony Dungy, who would go on to lead the Colts to five-straight division titles and a 2006 Super Bowl victory.

Much like Mora, the 16 teams that just clinched their spot in the Chase grid probably don’t want to talk about playoffs – or as NASCAR calls it, the Chase. However, the postseason has finally arrived, and much like Mora, each driver in the field just hopes to win a race.

16 teams will compete for the Sprint Cup Series championship, but only 10 were deemed worthy of cracking our power rankings after Denny Hamlin’s strong showing at Richmond International Raceway.

Let’s see who made the cut.

“Slow start to the season, but coming into the Chase literally hitting on all eight cylinders, finishing in the top 10 the last eight races.” – Dustin Albino, Frontstretch
“He’s won on a superspeedway, short track and road course. If he wants to win the Chase, he’ll likely need to add an intermediate track to that mix.” – Jim Utter, Motorsport

“Could the key to solving Harvick’s pit road woes really have been as simple as changing out the front tire changers? Team had some pretty good pit stops on Saturday and Harvick is Happy once again. We’ll see how long it lasts.” – Pete McCole, AutoRacing1
“Harvick continues to look like a tough out.  The pit crew seems like it could be his Achilles heel, but they seemed to be just fine Saturday night.  He will be one to watch.” – Phil Allaway, Frontstretch

“The way Truex and his team rallied back from a speeding penalty midway through the race shows just how dangerous they can be in the Chase. Now, Truex, Jr. will be out to prove that 2015 was no fluke and that he’s a legitimate contender for the title.” – McCole

“He appears to be the dark horse candidate to win the Chase for many, and for good reason.” – Utter

“The new NASCAR Heat Evolution game includes challenges where players attempt to recreate drives that occurred in real life. If the makers of the game are smart, Larson’s run from the final restart to the finish on Saturday will quickly be added.” – Bearden

“This is about the time of year that the No. 22 team started to really heat up last year.” – Albino
“Not a lot of wins but definitely a lot of top 10s. Consistency will be his strength in this year’s Chase.” – Gable

“He should still be a championship threat, but it seems like those bad finishes at Bristol and Darlington have hurt his momentum.” – Gable
“This team has been almost stealth-like in the way they’ve flown under the radar this season. Kurt has been almost quiet, which is more than just a little uncharacteristic. He’s strung together  some great finishes, ran consistently and stayed out of trouble – all crucial ingredients to surviving the Chase.” – McCole

“He is still an underdog as far as the championship is concerned, but that means he has little to lose in the Chase.” – Gable
“Two consecutive Chase appearances and six top-10 finishes in the last nine races. Chip Ganassi Racing got two cars in the Chase for the first time ever.” – Albino

Good news: Despite struggling summers, both of these previous champions made the Chase.

Bad news: They’ll both need to step things up if they want to survive the first few rounds.

Jimmie Johnson (10 Points) – “The No. 48 team is getting better, but they’re making mistakes left and right.  They’re nowhere near as efficient as they once were.” – Allaway

How they’re made: Following the conclusion of each NASCAR Sprint Cup Series race, members of a voting panel, including Frontstretch writers, members of accredited media including Motorsport, NASCAR and USA Today, as well as writers from other sites and social media favorites submit their top 10 drivers for the Power Rankings. The drivers are then given points based off their position, with first place getting 10 points, and each subsequent driver getting one fewer point until the 10th-place driver, who gets just one. Points are then tallied, and the rankings are created.

Response to your Headline, “says no one.” Pretty amazing with the exception of columns by Matt M, response traffic in the comments section is almost zero, no matter the article content. I guess that explains why 157,000 college football fans could not only afford the tickets at Bristol, but also the hotels rooms, jacked food prices and gas (in this weak economy), where as the sport, the facility was designed for, can only muster around 80,000 fans. That is what NASCAR should be talking about, because in a couple of years even Dale Jr won’t be talking about it at the watercooler between handshakes.

I’ve broached this subject before but why not have a trophy for the “regular season” points leader? Most of the other games have one. Oops, I just realized it would cost Brian some hardly earned money. Unless he can find a victim to sponsor it.

And since wins are so important to Brian why not a trophy for the most wins for the whole season? Call it the Richard Petty Award.