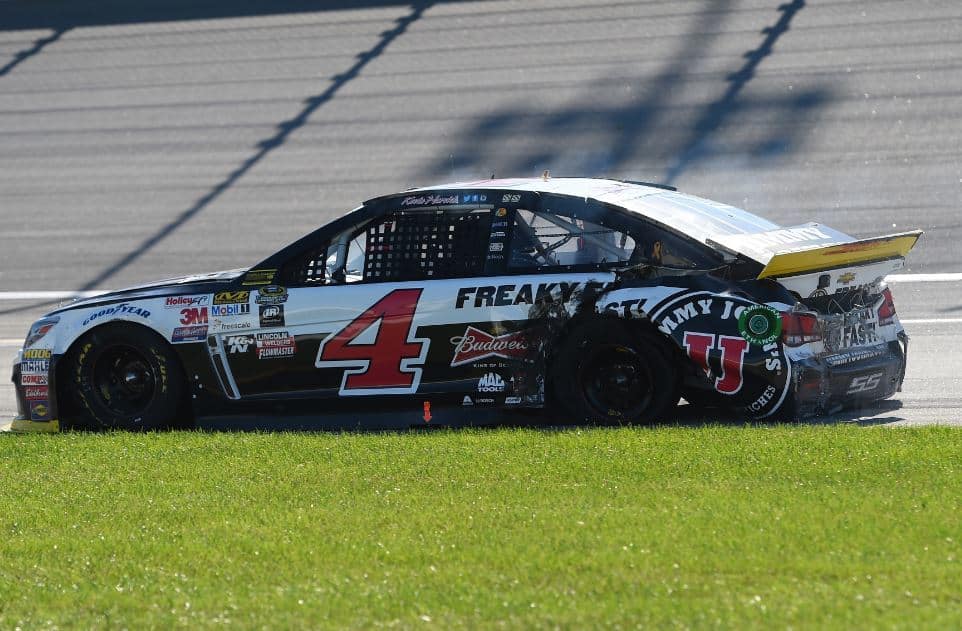 Should We Expect the Unexpected at Chicagoland Speedway?

Wow, here we go again. The week-to-week dance called the regular season is finished, and now we’ll take a couple jives into the Chase for the Sprint Cup Series championship.

With 16 drivers, 10 races and one champion, Sunday at Chicagoland Speedway is where it all starts. Kicking off with the 1.5-miler, which has stood as round one of the Chase since 2011, it has proved to be a place to shuffle the boards of everyone’s Chase grids.

In 2014, the final 35 laps saw a plethora of cautions pack the field together to crown the first driver to advance to the Round of 12. After Kyle Larson, Jeff Gordon and Kevin Harvick side-drafted and slid around for the lead, it was Brad Keselowski who sneaked by to steal the victory.

With such a high level of excitement leading into 2015’s Chicagoland event, there weren’t too many disappointed fans last year either, with Denny Hamlin pulling off a massive comeback victory after spinning on lap 2, falling nearly two laps down before climbing back to grab the win, while Joe Gibbs Racing teammate Carl Edwards overcame engine concerns and pit road troubles to finish second.

And worth mentioning, these races were without the low-downforce package, which has recently brought stellar races to the table approaching the Chase.

Also, there has been a healthy mix of competitors and dominators through 2016, with Martin Truex, Jr., Kyle Busch and Kevin Harvick leading 1,000 or more laps, while eight drivers have won in the last nine races.

If 2016 is anything like the past two years, don’t stop watching until the checkered flag drops.

How Big Can the XFINITY Race at Chicagoland Be for Clint Bowyer?

Categorize this as a well-timed deal. As Clint Bowyer closes in on the final 10 races of his toughest season of Sprint Cup racing, the HScott Motorsports driver will jump down a series to pull double duty this weekend in Chicago, racing for JR Motorsports in the XFINITY Series.

Not only will it give Kansas Clint a nice opportunity to win this season, Saturday’s 300-miler also stands as his return race to XFINITY, making his first start since 2012. The 2008 series champion could pull a relatively surprise win while the series regulars close out their regular season.

But Bowyer will have a certain level of determination higher than, say, Dale Earnhardt, Jr. or Harvick. After all, it has been nearly four years since Bowyer has won in any of the national series of NASCAR. Last winning in the XFINITY Series in 2009, Bowyer must see this as a grand deal to bring cash – both his son Cash and the green pictures of dead presidents – to Victory Lane.

It’s time for some night racing for Formula 1 as the series approaches the Singapore Grand Prix, located through the bright and beautiful streets of Marina Bay.

As most races on the F1 calendar seem to blend in with the week-to-week grand prix circuits, Singapore has become unique, standing as the longest race of the season at nearly two hours long per every 23-corner lap, while spark-flying overtakes meet the glowing skyscrapers of the city.

Being one of the truly astounding, visually delicious races of the season, Singapore has also brought some drama to the mix in terms of race winners and on-track troubles.

2015 in particular threw the paddock a real curveball after Mercedes men Lewis Hamilton and Nico Rosberg failed to even crack the top 3 of qualifying. Mercedes’ woes continued into race time, as Hamilton retired from the race after 32 laps while Rosberg finished fourth.

With the No. 1 team on the sidelines, it was Ferrari who stood to the challenge. Sebastian Vettel won from the pole (leading all 61 laps) while teammate Kimi Raikkonen rounded out the podium in third.

Perhaps Vettel winning on this street course is nothing too odd. In the last five Singapore races, the four-time champion has won four of them. Finishing second in the 2014 event, Sunday’s race would be a much-needed win for Ferrari, which has gone winless since this race last year.

Will Mercedes again lose its footing at this track? That’s tough to expect from one of the most dominating race teams in recent history of motorsport. However, in the midst of a two-point gap between Rosberg and Hamilton, it’s a polar opposite of one year ago, when the two came into Singapore 53 points apart.

With a close-cut championship also on the board for Sunday, Singapore always seems to bring out the best (and worst) of the grid.

Pagenaud vs. Power, Who Wins the IndyCar Title in Sonoma?

It all ends here for the Verizon IndyCar Series. With double-points on the line, it’s Simon Pagenaud and Will Power who will fight of the 2016 Astor Cup in Sunday’s 60-lap race at Sonoma Raceway.

Who has the upper hand? Well, that will mathematically go to Pagenaud, who is up 43 points over Power in the driver standings. Under this double-points format, Pagenaud could finish as low as fifth if Power wins. With Power finishing second or worse, Pagenaud would basically only have to reach the top 10.

With a semi-comfortable point cushion, Pagenaud also has a year’s worth of momentum on his side. Leading the points for 14 of the 15 weekends this season, the second-year Team Penske driver has blown his past stats out of the water, breaking his personal records by miles.

So all he has to do is bring it home, right?

Well, if we’re talking about momentum, Power has that area covered. While Pagenaud has only one podium in the last eight races, Power has five, including three wins.

Having a number of stressful championship battles in his past, Power finally proved to the world that he could handle the pressure, winning the title in 2014 after three runner-up finishes.

With the point battle to watch, you can throw in the plethora of names who will scratch and claw to make something of their struggling seasons. Marco Andretti, Juan Pablo Montoya, Charlie Kimball and Max Chilton will join others in trying to upset the field.