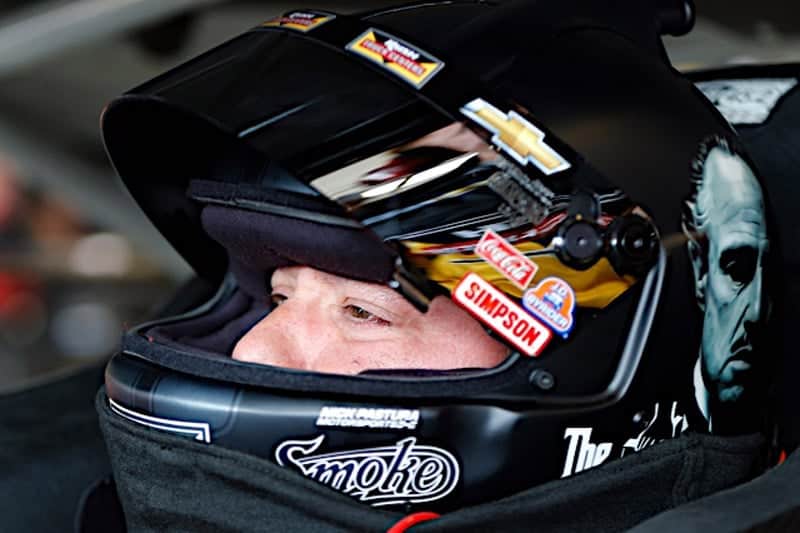 This past week has brought the Tony Stewart defenders out in force.  Between his dust-up (punting) of Brian Scott and his on-track pugilism with Ryan Newman, Stewart has been an interesting presence for the past couple weeks.  Matt McLaughlin covered the story, and the goal here is not to rehash it.  This also won’t be a place to try to give some kind of pop psychology analysis regarding Stewart’s mentality.

Instead, the focus here is on the foolishness Stewart is showing with regard to his ongoing legal battle with the parents of Kevin Ward.  While Stewart escaped criminal punishment, he is still embroiled in the civil case.  In a civil case, the matter is decided by the notion of preponderance of evidence as compared to a criminal case where the concept of reasonable doubt is in play.

As such, the past two weeks are sure to play into the hands of the plaintiffs’ lawyer.  The two incidents with Stewart serve as the very evidence that Stewart may indeed be a hothead and may lose his proverbial mind.  While the on-track affairs have been one thing, it is, perhaps, the interview after the Richmond race that may be quite damning.

It is then that Stewart confirmed Newman’s claim that Stewart wrecked him.  Seems maybe that Newman left Stewart-Haas Racing on bad terms.  Regardless, there’s one big thing at play here.

Stewart did not talk to the TV crew directly after the fracas.  Instead, he took time and then spoke at the race’s conclusion.  One would think that someone in the PR department may have used that gap in time to have a sit-down with Stewart and maybe go over how he should present himself in the interview.  And if a sit-down did in fact happen and this is how Stewart presented himself, then whoa.

The Stewart story is one that won’t go away.  He’s a rare talent and a polarizing person.  Watching all of this play out from a distance is must-watch TV.  Then again, it’s funny what we all watch sometimes.

It’s been 26 weeks and Chicagoland will finally get things started.  That the Chase holds such sway over how things are covered shows that, in some ways, it has become a focal point and attracted the attention that Brian Z. France and cohorts had intended.  While many fans may still abhor this method for determining a champion, they seem to be howling in the wind as the Chase does not look like it will be going anywhere anytime soon.  The structure may be flawed but it is what we’ve all got at the moment, so let’s finally get this thing going.

Happiness Is…Clarity.  NASCAR let it be known that drivers in the Chase will have their own penalty system during the playoffs.  (Chad Knaus is probably already looking for a loop-hole.)  Of course, the overall reason for the rules is to ensure that the teams are competing on a level racetrack, but NASCAR is now adjusting things so that a car that wins but fails inspection does not enjoy the benefits of the victory – which is to say that car does not automatically advance to the next round of the playoffs.

The interesting thing here is that NASCAR has further divided the field between the 16 cars in the Chase and the 24 who are not.  Those in the Chase now have their own points system as well as their own structure for penalties.  This continued division between the two groups makes one wonder just how long will it be until the races during the Chase feature just those 16 cars on track?  Maybe there’ll be Cup Race A for the one group and then the headlining  second Cup Race B with the championship contenders.  For now we’ll just have to enjoy the other 24 cars clogging up the track and making things difficult.

Happiness Is…Champion.  Judging by the numbers, many of you have not been following IndyCar much this season.  The 100th running of the Indianapolis 500 may have gotten some spectators and viewers but aside from that marquis event, the series still lacks a large fanbase.  That’s a little too bad considering the show that they frequently give.  This weekend marks the culmination of the season with Simon Pagenaud looking to clinch his first championship after leading the points from the second race onward.

Though Alexander Rossi may have been the big story of the year, owing to his win at Indy, Will Power’s story should be a close second.  After missing the first race of the year due to a misdiagnosed concussion, it is Power, Pagenaud’s teammate, that is the closest challenger to taking the big trophy – though statistically it is doubtful.  Regardless, at least throw some love to IndyCar during the commercials of the Cup race for what should be an interesting finale.

IMHO to call the Chase a playoff system and include everyone else makes it a travesty. The sooner they go that route the better off they will be. My suspicion is that financial reasons are the hold up. If the sponsors(s) have paid for races that the race doesn’t compete in then thats a problem. Not insurmountable but a problem.

As to Stewart, he certainly hasn’t done his legal team any favors with his actions lately. I think hindsight will show that he should have found a graceful, at least as much as possible, way to retire from driving shortly after that incident in New York. But obviously he choose not to.

Clarity? That’s day-to-day with Brian depending on the ideas he dreams up while he’s sleeping.

“Maybe there’ll be Cup Race A for the one group and then the headlining second Cup Race B with the championship contenders. ”

Someone proposed that idea already. Which race is first? If it’s the chumpionship race, only family and friends will stay for the second. Who wants to see 4 cars for say 100 laps at Miami in the last one?

One of the last topics at the end of the last race will be who will make the chase next year to be continued until Daytona.

I believe the new penalty structure applies to all teams. Nothing in the NASCAR bulletin said it only applied to Chasers. It appears all cars will be held to the same lugnut/LIR inspection standard. It’s only that the Chasers will face different consequences if they get caught (loss of advancement for a win). All the other penalties (points, fines, suspensions) will be the same for all teams.

the problem with the new penalty system is the same one with everything else in Nascar. Its always discretionary. They can do this or that, not they will do this or that. Which always leaves room for the appearance of favoritism.
In football when you see a penalty flag you know what the result will be. Its never differs, and its the same for both sides.
Maybe thats an approach Nascar ought to consider.

fans “howling in the wind” because the “chase” isn’t going anywhere? the fans may be howling the wind or it seems many have simply stopped watching/caring about NASCAR.

I base that on the far smaller number of comments on this website than there were just a year ago, as well as the empty seats & low tv ratings, that have been prevalent for many races this year. People/casual fans may watch Richmond & Darlington obviously did a great job of promoting the Labor Day race. Now we get to the Dull D’s and the tv personalities frantically shouting about how exciting it all is. Maybe it will be.