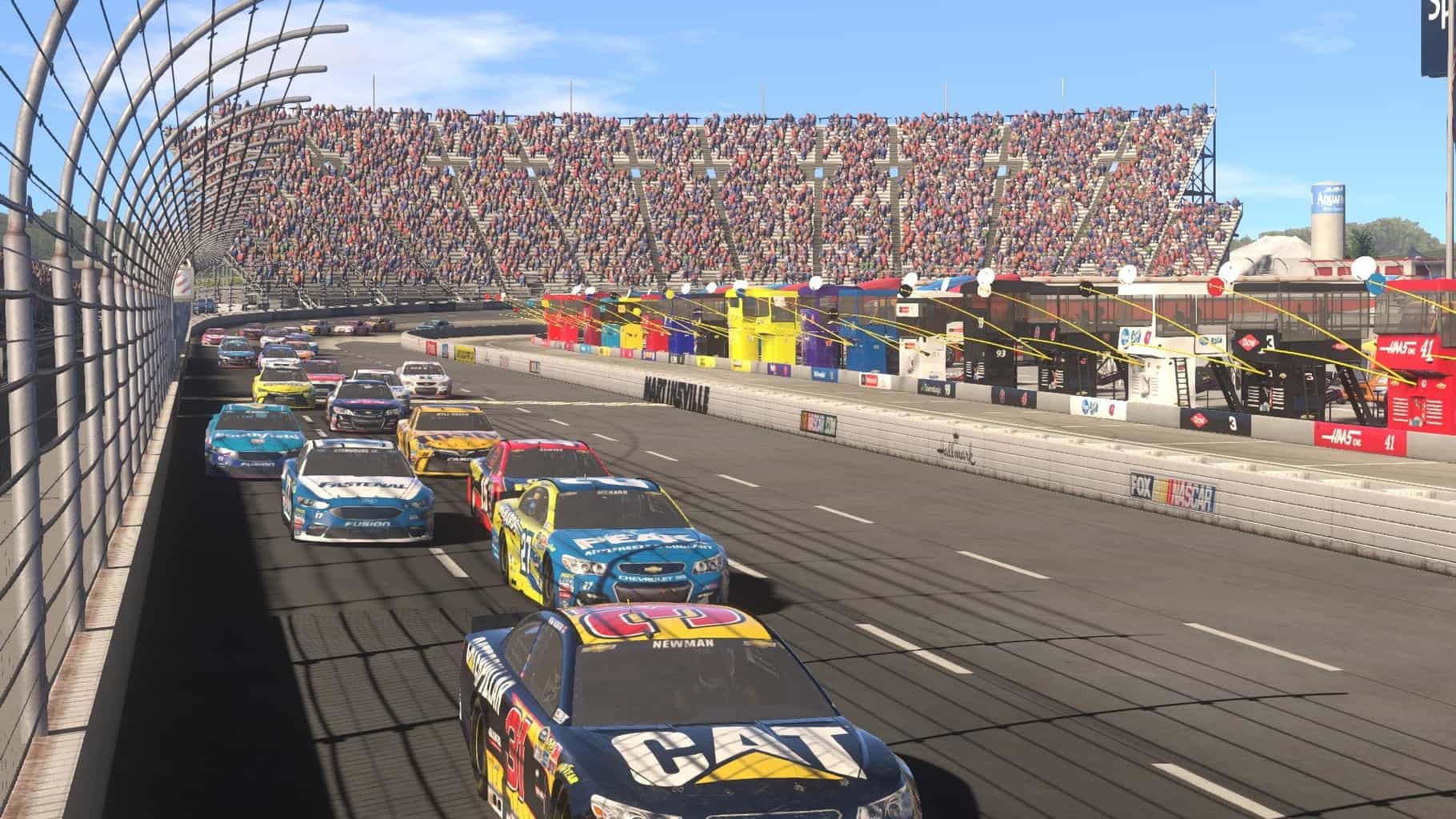 It’s been quite some time since its predecessor, NASCAR ’15 — an update to NASCAR ’14 — was released in May, 2015. With Dusenberry Martin Racing taking over the rights to the NASCAR video game license, it’s the ultimate “Throwback Thursday.”

While expectations are high for the latest NASCAR video game, the creators are being realistic, understanding the challenge of satisfying a wide range of NASCAR fans. Matt Dusenberry, Director of Partnership Development for Dusenberry Martin Racing, spoke with us to discuss the new game and all of its new features.

Q: What is the fuss over NASCAR Heat Evolution? – Donna L., Charlotte.

A: NASCAR Heat Evolution has the potential to be a game-changer for the next generation of NASCAR fans. Without a new game for over a year, the sport essentially lost out on several months of trying to get new fans through video games, something that is important as adolescents continue to get more interested in their gaming consoles.

“We’re a brand new video game publisher that got started in Jan. 2015,” Dusenberry said. “We bought the license and assets from Eutechnyx, and we threw out everything that was done in the past. We hired Monster Games and we built the NASCAR video game from the ground-up, which is NASCAR Heat Evolution.”

While the game was released Tuesday, there has already been a mixed variety of reviews, with some folks raving about how great the game is and others complaining about everything they find wrong with it.

However, Dusenberry Martin Racing is committed to not only making this game a success, but creating a franchise, similar to the old NASCAR Heat series, along with its successor, EA Sports.

“Basically, the opportunity to purchase the business became available in late 2014, and we jumped all over it,” Dusenberry said. “Back in the original NASCAR Heat days, Tom Dusenberry was the President of Hasboro Interactive and Ed Martin was an executive producer for the NASCAR Heat game and Rich Garcia from Monster Games developed it. The original NASCAR Heat is the highest-rated NASCAR game of all-time. We brought back all the parts that got the original game together to create the version for the next generation console.”

Brad Keselowski, hired Dusenberry as his Truck Series team’s director of business development from Aug. 2012 to Jan. 2015 and is one of the video game’s investors. While it is unknown how much money the former Cup champion and current Chase contender invested with the group, he is making it well-known that he believes in what the game represents.

On Aug. 25, Keselowski published a blog on his website dedicated to his love of video gaming, specifically, the old NASCAR games. In his blog, he delves into his relationship with the game’s developers, who eventually came to the Team Penske driver to invest in the venture.

However, for Keselowski, it wasn’t only about putting the dollars into the game. Combining his love of video games with racecars, he sought to make a difference, like he frequently does.

“I felt rather strongly that a well-done video game could be an important part of moving the sport forward, and also a way for me to give back to the sport,” Keselowski said in his blog.”If I was going to invest in the game—a NASCAR racing game—I wanted to have a voice in how it was it made.So I became a consultant and an endorser, too.”

Along with Keselowki, several drivers were able to provide input for Dusenberry Martin Racing, attempting to give fans as realistic of an experience as possible.

“We have the rights to put all the drivers in the game, and then we hired Brad Keselowski, Joey Logano, Ryan Blaney, Matt Tifft and Ben Kennedy to actually come to our office and work with our development team to give feedback on how to make the cars feel like they’re handling the real way and how the tracks drive authentically,” Dusenberry said. “They were invaluable in this process.

“We ask them several questions, like how does the track feel? At Phoenix, Joey Logano talked about the sun being in his eyes entering Turn 1 in Phoenix. One of our developers added the sun, so it’s hard to see when you enter the corner. Brad Keselowski really gave feedback on shift points. He was racing at Charlotte Motor Speedway and had us adjust restarts with where gear changes happen. It’s just those little things like that to create a whole new layer in the game.”

Q: So what makes this game different from the other ones? – Darrell R., Milwaukee.

A: Let’s face it, NASCAR games haven’t been the greatest over the past few years. As EA Sports’ contract with the sport was nearing completion, it was clear there was a lack of effort on the developers’ part to make the game realistic.

At times, it didn’t even seem like you were playing a NASCAR game. At the end of EA Sports’ tenure, it appeared as if they were so obsessed with making the graphics realistic that the actual competition in the game itself didn’t matter. The handling of the racecars was abysmal, along with the competition itself, which was tremendously easy to defeat.

“The differences between us and other publishers in the past is we’re 100 percent focused on NASCAR,” Dusenberry said.”We aren’t interested in other forms of motor sports. We’re not interested in other sports games. We’re based in NASCAR Plaza right in Charlotte, so we’re in the NASCAR building. All we do is NASCAR games all day long. I think that commitment to quality is what will set us apart.”

While the company is confident in making the game a success, Dusenberry admits it will need some tweaking after consumers give them feedback.

Evidently, the goal is creating a NASCAR video game franchise, one that hasn’t existed since EA Sports’ decade-long takeover of NASCAR video games. Though the EA Sports games, and even the ones created by Eutechnyx, have more realistic graphics, the competition is allegedly better than the original NASCAR Heat, which is known for its great racing.

“Some of the coolest features of NASCAR Heat Evolution are adaptive artificial intelligence,” Dusenberry explained. “As you race, you get track rating and speed points. The computer will remember if you’re a good driver or bad driver and adjust the field accordingly. The purpose of this is when we have our Sprint Cup Series drivers in, they’re really good at the video game.

“The game actually adjusts to them and makes the field harder to pass and weave through. If you’re just getting into the sport as a 12 or 13-year-old, starting to learn the drivers and rules, the field will recognize that and slow down to your skill level.”

As reviews of NASCAR Heat Evolution roll in, it will be quite intriguing to see the response from the game’s developers.

“A lot of being a race car driver is about reaction timing, spatial awareness, confidence—all things that video games can teach,” Keselowski said.”They’re very important tools for anyone in the NASCAR world. There’s a lot to be said for the confidence that a video game can help you build, and those are all qualities that get tested in NASCAR Heat Evolution, too.”

Below are some images from the game itself via drivers:

Head to your local store and pick up @dmrnascarheat today!! I'm so excited to play online! #NASCARHeatEvolution pic.twitter.com/IIbTMCxhkJ

Great article. Love auto racing.
Just wondering if you are aware that in the last few years they have been experimenting with Pit Crew CPR. Using the same strategy for Pit stop in auto racing, Emergency professionals have developed a similar idea for providing CPR. You could read more about it here: http://www.torontocpr.ca/pit-crew-cpr-can-help/